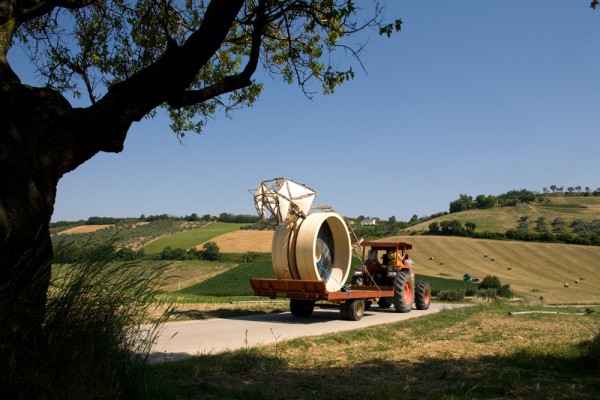 Futurefarmers, This is Not a Trojan Horse, 2010; intervention in Abruzzo, Italy, 12 days; Courtesy the artists

In this brief excerpt from the exhibition catalogue for Six Lines of Flight: Shifting Geographies in Contemporary Art, Amy Franceschini of Futurefarmers, in conversation with SFMOMA curators Dominic Willsdon and Apsara DiQuinzio, talks about what it has meant for Futurefarmers to have made a commitment to living and working as artists and artist collective here in the Bay Area. The passages excerpted are from a conversation between several artists who have developed unique arts organizations in the cities featured in Six Lines of Flight. Their discussion was recorded at the museum on August 30, 2011, as part of a series of conversations between these artists, SFMOMA curators, and a range of San Francisco Bay Area curators and scholars. We posted another excerpt on Open Space earlier this fall; you can download the entire discussion here. This weekend, as part of the Here, There, and Elsewhere festival, SFMOMA is convening Creating the Periphery, a symposium which will address questions around issues of “the periphery” as pertains to contemporary art; if you are planning to attend, that longer discussion might be of interest to you ahead of the program.

Amy Franceschini: Sometimes I wish I hated [the Bay Area] enough to leave. It is a bad drug, because of how expensive it is to be here. It puts certain pressures on our prac­tice. We are continually scrambling, teaching at different schools, doing design work, freelancing, and art becomes our hobby, in a way. Being in one place and committed to that place is something that became really important to us about six years ago. The history of the Bay Area has definitely influ­enced our work, in terms of the active resistance that happened here in the sixties within the political and academic realms. Activism was fueled by the wars that were going on and the military research that had been happening in this area since the late forties — it was the most powerful military research in the world, and resistance to it was very strong. Using that as a historical precedent, we looked at archival records on students at Stanford who were studying computer science in the sixties. They went there to think about the development of personal computers for libera­tion, and found that they — their intellect — was being used to develop electronic warfare. So a group of these students dropped out and asked their profes­sors to teach alternative curricula like Maoist theory, alternative Western civilization, etc. The classes were taught in rooms that were squatted. For about a month, there was a kind of alternative school at Stanford, and then it got pretty popular and they were kicked out. The students started their own school, called the Midpeninsula Free University. They hosted classes in garages, bookstores, and surplus spaces around the Bay Area. There is a huge archive on this at Stanford, and it has been really inspirational for a lot of artists here in terms of thinking about alterna­tive education and free education, especially in the midst of all these universities that cost so much money to attend. When you are in a place for a long time, you are able to tune in to the nuances of that place. There are moments that open up politically. Like in 2003, when Matt Gonzalez, a Green Party candidate, ran for mayor of San Francisco. Electing a Green Party candidate would have been a huge deal in the United States. He was very popular, and two days before the election, former President Bill Clinton came to campaign for his opposition, Gavin Newsom, who was running as a Democrat. Clinton came because the United States was afraid of a progressive city like San Francisco having a Green mayor — that could have had a huge impact nationally. Anyway, Clinton came and campaigned, and Gonzalez lost in a runoff race, 47 percent to 53 percent. But in that moment the city became politicized in a way that I hadn’t seen since the very early nineties, during the Gulf War. A moment emerged in which people’s minds opened, and there was a shift, even in the art community, in how they thought about themselves in relation to the city and to politics, and how they thought about the city’s potential as a medium that can be sculpted.

Dominic Willsdon: It’s very interesting to hear you talk about this, because we were aware that across several of the contexts represented here, there was in each case some kind of engagement with a history of trauma. I guess we thought that San Francisco was the exception to that, but there is a way in which the always-missed, or lapsing, possibility of some sort of major social transformation in this region is in itself a problem to work through — though it is not a violent trauma.

Apsara DiQuinzio: The same thing happened recently with Prop 8, the ballot measure that banned same-sex marriage in California. That was a real lapse, or nega­tion, of a very positive social transformation.

AD: I have to say, though, that San Francisco does not get off the hook, because we have a huge problem with homelessness and drugs in this city. If you go to the Tenderloin it is total disaster, and we overlook it every day. A kind of malaise has devel­oped, coupled with the sense of normalcy that Oscar [Muñoz] mentioned in reference to Cali. The third world exists in the first world and vice versa; they are not neces­sarily separate spheres.

DW: Yes, that’s true; and the city organizes itself to create and maintain separation between these worlds. But this idea of trauma in the history of a region — to what extent does it inform what you do there?