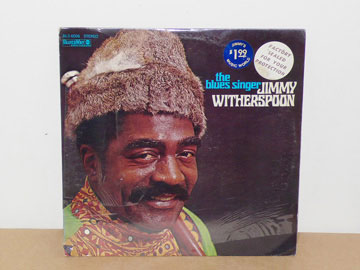 When I was living in San Francisco, it was hard to find really good used records. In New York however, they are all over the place and it seems the more I look, the more I find. So for the benefit of those who thought record collecting was dying out, I am here to say it’s not. In fact, a whole lot of great records can be bought for about $1.00 each in junk stores, thrift shops and yard sales.

I put together a selection of some of my recent finds in a slide show at the bottom of this post.

The inspiration for this article is a still-sealed Jimmy Witherspoon record that I found just the other day. It’s been in that thin plastic for 42 years now, as the record was made in 1969. I have to imagine it’s gone from person to person over the years or it’s just sat somewhere in a box for decades. Truthfully, I will never know, but it’s that kind of thing that fascinates me about records beyond just the music on them.

Another thing I find interesting is that their mortality is built into their creation; the more they get played the more they get worn out. So – if you play a record enough, all the scratches and needle marks and touching of it will eventually make it unplayable. There is no such thing as erasing scratches from vinyl. The scars from rough handling just can’t be removed.

When they got to that point – back in the day – people would usually throw them out or donate them. That’s why thrift stores are full of scratched up records nobody wants.

But the good news for the record collector is that among all those discarded records are often some perfectly good ones; ones that nobody listened to or liked. For example, if a family hated jazz, but grandpa had a bunch of jazz records nobody listened to, they would probably be in good shape. Then when grandpa/grandma died and they sent all his/her stuff to the Goodwill, those jazz records would end up among all the Barbara Streisand and Neil Diamond albums. Situations like that are more and more common as families lose touch with each other and the kids move across the country.