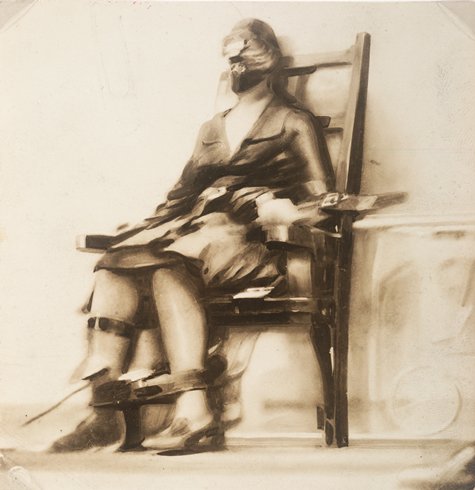 There’s something inside a human being that no one has thought of putting into a machine.

Thought to mark the occasion of her marriage to Roland Penrose in 1925, the title of a Valentine Penrose mixed-media piece, “À mon Époux, Reconnaissance (Dit-on),” translates as “To my husband, with gratitude (as they say).” Eventually, V. Penrose left R. Penrose (they remained lifelong friends), and R. Penrose fell for and married Surrealist photographer-turned-docujournalist Lee Miller, who had rediscovered the technique of solarization while working in Man Ray’s Paris studio in 1929 (as did expat German photographer Ilse Bing, quite nearby). Solarization, “invented” all the time (the effect is caused by someone turning on the light in the darkroom, and goes back to the daguerreotype), isn’t the holder of aesthetic power in The Electrocution of Ruth Snyder; and the 4″ x 4″ image, taken in 1928, is not surreal — certainly it hasn’t been contextualized as such. The document was formed at Sing Sing, “when the current struck,” and Chicago Tribune photographer Tom Howard, hired by the New York Daily News for a stealth operation, “hoisted his pant leg and secretly snapped with a one-use camera one of the most indelible images the death chamber offered the twentieth century, to be splashed in a few hours’ time on the Daily News’ cover under the headline, DEAD!”

To state the obvious, a truer thing is that Ruth was in a participle state, we’ve come to it in medias res, and she’s not dead, and so “never” “dead,” as far as this image’s shuddering legibility goes. But the question isn’t “Is she dead?” simply because this is a “living” artwork, its coppery fumigant reminiscent (for me) of one of the solarized portraits — say an early Man Ray or Lee Miller shot of someone also now dead (a “real live girl”), yet seen by us as, if I can mix media, “painted with love.” The lack of sure state was brought to bear by Howard (“With his radium bougie he quickens the dregs of the human crucible” —Breton), who had to “pass as a writer” to gain entry. A leveler: There’s no absolute knowledge in a blackout. (1) So as much as “Ruthless Ruth” “herself” is lit by the silver gelatin, which acts here as an interrogator’s lamp outlining a dark internal — a deepest psychological or social impurity projected by the viewer — a doubling of temporality is effected by both “the very nature” of photographic transmission and the fact of its subject “presently” dying in a day dress, countering all that’s highlighted, imaginably, in order to truly fight particular feeling. 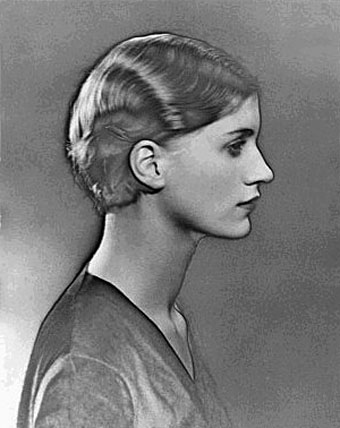 I can’t help but think of Miller’s wartime photography also. Ruth Snyder of course does not retain her face, as her mask is what connects her neurons to current. In contrast, Miller’s photo of women wearing fire masks for protection, taken in London in 1944, is unnerving in its stylishness — a Surrealist’s composed take on a certain reality of war. The Electrocution of Ruth Snyder portrays the inverse — a document gone surreal due to its “one-use” capture. Miller and Tom Howard were both photojournalists in the days before the genre’s transcategorical alignment with art making, but it’s Howard whose work transcends document. With all the space around the figure seated in her chair, she becomes pure object, encouraging the accuracy of the title: It’s the electrocution, not Ruth Snyder herself, that is increasingly lit. Howard’s camera was put to use, to prove something had been made right, and we are left with an aura of the woman bound with a machine. 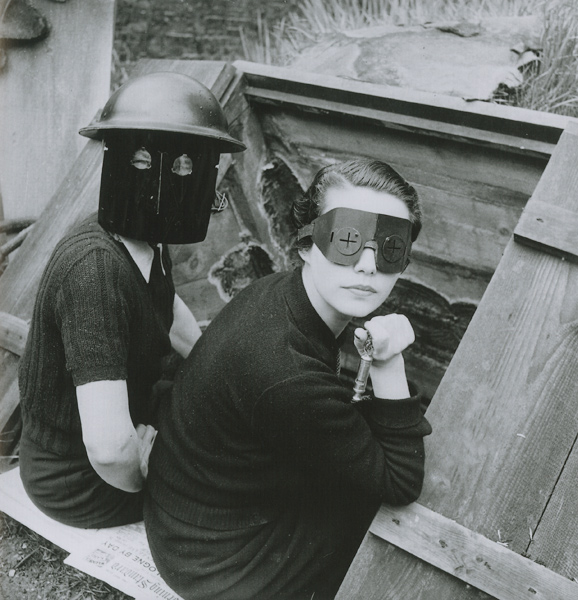 I’m inclined to attest that the photo’s reality, then (now), isn’t its archival value (it’s no fun to relegate the past to the past), nor its horrific ingraining and indictment of Americuh as a voyeuristic killing machine, though that’s a good one — but that its uncanny and undecided aesthetic qualities, its blotted definition, elicit an empathy . . . for her story. In a service message during her war-correspondent years, Lee Miller wrote to her Vogue editor, Audrey Withers: “One film in the envelope is soaked in melted lip rouge. Be careful in handling as the grease base will make finger prints.”

The story surrounds a woman being executed for murdering her husband, after all . . . but she is a captive, too — “taken” by two machines at once, a double affront, by chair and camera. This beckons more a metallic deepening of my fears (I’m sorry, wariness) (no, fears) (no) of domestic and institutional entrapment, right. As a biological subject, I should be weeping without effort. But this photo’s a bit of an earthquake, a shape of things to come for women and social collectivity. So the question becomes, for me, “Isn’t she dead?”

It had been 29 years since a woman had gotten the electric chair; and this was the first one for the twentieth century. Snyder, a Long Island housewife, is reported to have long been plotting the death of her husband Albert. She was eventually aided by her lover, corset salesman Judd Gray. Corset salesman — what an ironic occupation for Ruth’s lover, who’s set to “free her from her loveless marriage”! L’amour fou finally succeeded after Ruth’s startling seven attempts to kill Albert, all of which he survived (according to Gray) (according to Wikipedia). The murder — and Howard’s photograph of the execution — gave more significance to Ruth as a whole person than to Albert; and the case of the Snyders was legendarily attended to, becoming the basis for Sophie Treadwell’s hit Broadway play Machinal (1928, starring Clark Gable as the lover) as well as James M. Cain’s Double Indemnity, which threw Ruth forever unto femme fataledom. But Treadwell, an interwar journalist, had actually been assigned to the case. From Machinal’s Episode Six, “Intimate”:

MAN. You’re awful still, honey. What you thinking about?

WOMAN. About sea shells. (The sound of her voice is beautiful.)

The clandestine nature of the photo-taking and the photo’s contrasting “blow-up” in the world-world in the months and years to come led to a very overexposed Ruth, both in photographic terms, as you can see, and actually. Its inclusion in the massive 2010 Exposed exhibition (curated by SFMOMA’s Sandra Phillips), which traveled from the Tate Modern to SFMOMA to the Walker, and dealt with the ethics of seeing (or as the subtitle has it, “Voyeurism, Surveillance, and the Camera Since 1870”), speaks to this vulnerability. But bear with me as I use language to gain ground — the photo has become in my thinking about captivity and domesticity more hyperreal than surreal. This can be argued too — in hyperrealism, often nothing happens but repetitions of otherworldly banality, the example of the day being Chantal Akerman’s Jeanne Dielman, 23 Quai du Commerce, 1080 Bruxelles. “No live organism can continue for long to exist sanely under conditions of absolute reality,” wrote Dodie Bellamy about the film in Soup #4 (ed. Steve Abbott, 1985). I mean, who knows what Snyder had been going through. Bellamy continues (spoiler alert):

Ruth Snyder was not a prostitute, at least in the official sense — and I’m admittedly torn up for an answer to my friend Cecilia Corrigan’s recent pondering: “Will domesticity ever be rescued from the feminine?” I almost chose Laurie Simmons’s Woman Reading Newspaper to write about for Open Space. 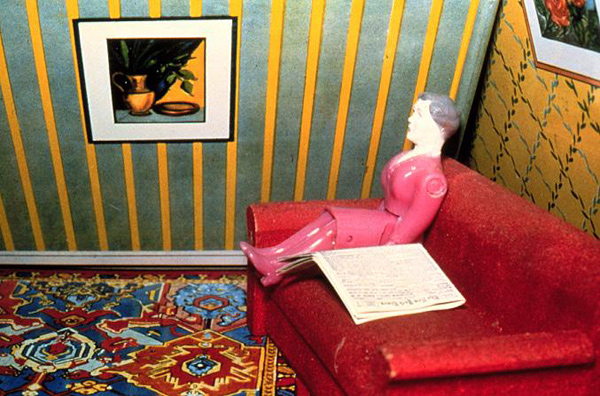 Simmons’s photo doesn’t prefigure death so literally, inasmuch as all art does(n’t), and there are charming ménstroo-əl hues in the couch and dress of the plasticine female — an intense coloration that bestows much relief after the one-note electrocution. The scene from the top reminds me of David Levine’s HABIT, an installation/performance which has been in “residence” at Robert Wilson’s Watermill Center and MASS MoCA and had its New York premiere last weekend. Bellamy again: “Jeanne Dielman can feel [her house] closing in. Like the day she gets up too early, and is shut out from everything, the butcher, the post office. There is no place left but that House.” 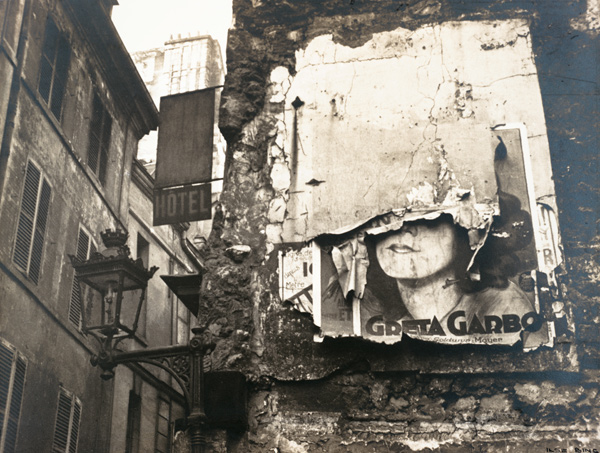 (1) A reworking of Jean Day in Enthusiasm: Odes & Otium quoting Sartre (“At night all cows are black”), who was paraphrasing Hegel’s denunciation of Schelling’s concept of absolute knowledge.

Corina Copp is most recently the author of Pro Magenta/Be Met (Ugly Duckling Presse 2011), with publications forthcoming from Bad Press, Minutes Books, and Trafficker Press. An excerpt of her play The Whole Tragedy of the Inability to Love: Part 1. SUSANSWERPHONE has just been published at The Claudius App 3, and will debut as a workshop presentation this October at the CUNY Graduate Center’s three-day PRELUDE.12 Festival. She is a former editor of The Poetry Project Newsletter (2009–11), and lives in Brooklyn, New York.

Our One on One series features artists, poets, curators, and others from around the country, responding to works in SFMOMA’s collection. You can follow it here.