“It’s Hideous and It’s Eloquent” (A Bucket of Blood)

“I will talk to you of art, for there is nothing else to talk about.”
—Maxwell H. Brock (Julian Burton) in A Bucket of Blood

California, 1959: in an apartment on San Francisco’s Fillmore Street, Jay DeFeo, a central figure in the city’s artistic bohemia, labors over a mammoth monochromatic painting called Deathrose. Meanwhile, in Los Angeles, Roger Corman begins a black-and-white film about artistic bohemia, tentatively titled The Living Dead. DeFeo’s opus will take another seven years to complete, not appearing in public until 1969, under the title The Rose. Corman finishes shooting in five days and his opus premieres in October 1959 as A Bucket of Blood, on a double bill with Attack of the Giant Leeches. 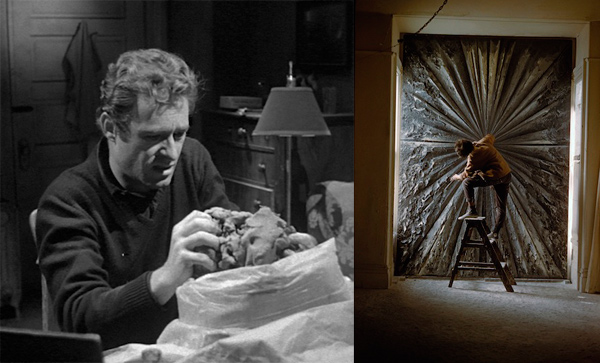 A Bucket of Blood features a dead cat pulled out of a wall, coated with plaster, and hailed as art. After a handful of public appearances, The Rose was coated with plaster and left for dead behind a wall at the San Francisco Art Institute, to be exhumed decades later; Bucket ended up in the public domain, splattered all over the Internet. Which means that this Halloween, while you wait for The Rose and the rest of the DeFeo retrospective to arrive at SFMOMA, you can pass the time with another inspired and cautionary artifact of ’50s Beat culture and artistic ambition.

“Life is an obscure hobo bumming a ride on the omnibus of art,” proclaims Maxwell H. Brock, house poet at the Yellow Door, a Venice coffeehouse frequented by the kinds of people who might have caught DeFeo’s 1959 show at the Dilexi Gallery. Yellow Door busboy Walter Paisley (Dick Miller), a creature as intellectually unformed and malleable as the cube of wet clay on his kitchen table, dreams of getting on that bus. The trouble is, Walter can’t seem to turn his lump of clay into art — until an incident involving the landlady’s cat leads to a breakthrough that prefigures both George Segal and Damien Hirst.

With success, however, comes anxiety. “What am I gonna do next?” Walter frets. “I gotta do something before they forget me.” What he does next isn’t exactly a surprise — but plot aside, to appreciate Miller’s weirdly poignant performance, Charles Griffith’s endlessly quotable script, and Corman’s amalgamation of anthropology, allegory, and the cheapest of cheap thrills … you have to watch the movie.

Like any artist, Walter Paisley owes a debt to some creative forebears. See, for instance, John Carradine’s compulsive, murderous painter in Bluebeard (1944) and Richard Dix’s craven one in The Secret of the Whistler (1946); or those better-known sculptors-slash-killers, Lionel Atwill in Mystery of the Wax Museum (1933) and Vincent Price in House of Wax (1953).

In turn, Bucket of Blood left its own stain on later films: its sets and sensibility were recycled by Corman and Griffith for their Little Shop of Horrors (1960), while its plot was ripped off by Herschell Gordon Lewis in Color Me Blood Red (1965), resuscitated by Corman’s company for a 1995 TV remake, and transfigured into a musical by Chicago’s Annoyance Theater in 2009. And Dick Miller revived Walter Paisley’s name, if not his character, in a number of later and lesser movies. Walter gives immortality a bad name, but Bucket of Blood has earned it. 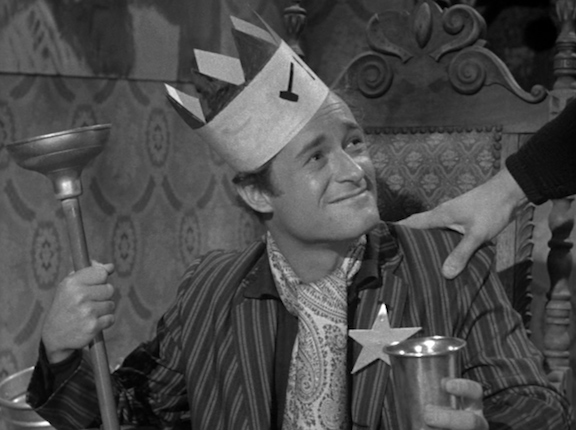