Me Voy Pa' Cali: Reclaiming a Regional Identity and Practice

“The medium of performance, with its economical nature and inherent element of surprise … has proved most appropriate to the precari­ous, unstable context of life in Cali..” — Michèle Faguet 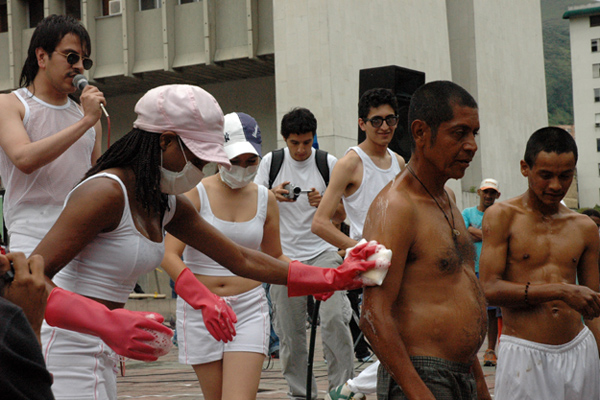 Me Voy Pa’ Cali: Reclaiming a Regional Identity and Practice

In a recent essay narrating the history of Helena Producciones, the Cali-based artist collective he cofounded in 1998, Wilson Díaz contextualizes the Colombian art scene of the late 1990s against a back­drop of violence, economic depression, and general cultural malaise that characterized the decade. For a city still reeling from the impact of the brutal drug cartel that had been active there between 1977 and 1998, and shaken by a phase of corruption and greed in the 1980s that nearly destroyed its already delicate social fabric, this period seemed particularly bleak, even in a region long accustomed to the effects of war and social conflict. Significantly, the pessimism that motivated Díaz and a group of like-minded art professors and recent art school graduates to actively contribute to bettering the cultural landscape of Cali was premised upon a nostalgia for the city’s golden age — the 1970s — when an incredibly vital artistic community had emerged, transforming this small, peripheral city into an important cultural center that became a reference point for successive genera­tions of cultural practitioners from other parts of the country and throughout Latin America. With its first major project, Terror y escape (Terror and Escape), in 1999, Helena explicitly reclaimed this historical lineage by drawing upon “tropical gothic” — a local tradition articulated in the writings of Andrés Caicedo and the films of Carlos Mayolo and Luis Ospina, among others. Terror y escape included a film series, a pub­lication, and an exhibition featuring canonical works from the 1970s, as well as more recent projects by young artists from Cali and Bogotá.

The 1970s was a time of tremendous growth in Cali, spurred by an influx of rural migrants who had been displaced by the armed conflict that began in 1948, following the assassination of presidential candi­date Jorge Eliécer Gaitán. Industrialization also played a significant role in the city’s transformation: after the United States drastically limited the import of Cuban sugar in 1960, Colombia became a leading sugar exporter, with Cali as its largest production hub. This tropical city is famous for its lively street culture, its status as a burgeoning center of salsa music, and the friendly disposition of its inhabitants, whose warmth and willingness to look beyond class and racial barriers stand in contrast to the guarded, mistrustful tempera­ment often attributed to Bogotanos, the residents of Colombia’s capital city. Cali has nevertheless suffered from the problems endemic to a hierarchical society whose economic structure is based on exploitation and inequality. Such contradictions naturally drew the attention of artists such as Caicedo, a young writer and aspiring filmmaker with an obsession for macabre subjects, the stories of Edgar Allan Poe, and American horror films. Although his prolific output was chiefly published after his suicide in 1977, Caicedo became a leading figure in the creation of a literary and visual language that addressed the precarious and conflicted nature of Colombian urban culture but was influenced as well by the global countercultural, revolutionary spirit characteristic of those years. 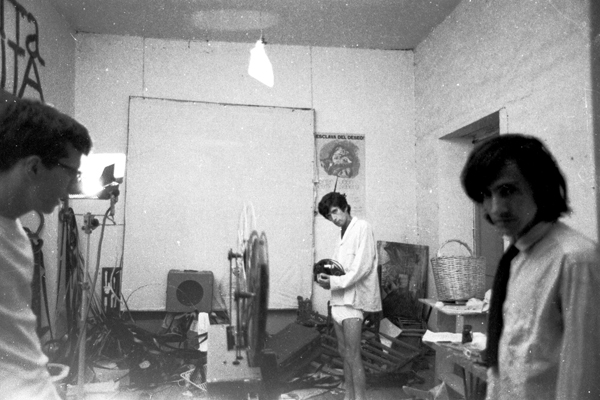 Caicedo was part of a group of visual artists, filmmakers, and writers associated with Ciudad Solar, the country’s first alternative space. Founded by Hernando Guerrero in a 19th-century mansion his family owned in downtown Cali, Ciudad Solar (1971–77) featured an art gallery, a darkroom, a printmaking studio, a store selling artisan goods, and temporary living quarters for participating artists, whose presence lent the space a communal atmosphere. Caicedo screened films every week in the building’s large central courtyard, and these gatherings — called the Cine Club de Cali and frequented by Mayolo and Ospina as well as film historian Ramiro Arbeláez — were seminal in the development of the unique film culture in the city that was later dubbed “Caliwood.” The activities of Ciudad Solar provided many young filmmakers, artists, and curators with the opportunity to initiate their practices. Mayolo and Ospina gave the space production credit for their first collaborative film, Oiga vea (Listen Look, 1971), although, in reality, this was purely a gesture of solidarity. That same year, Miguel González (today an established cultural figure who long held the position of curator of the Museo La Tertulia in Cali) was in charge of the Ciudad Solar art gallery, where artists including Oscar Muñoz and Fernell Franco first showed their work. According to González, those associated with the space were united by their interest in urban themes that had previously been unexplored in Colombian art, film, and literature. Perhaps the most emblematic work in this vein was that of Franco, a photographer whose traumatic biography mirrored much of the drama and instability of a society in conflict. Unlike many of his friends at Ciudad Solar, Franco did not come from an affluent family; he was among the thousands who had fled the countryside to settle in Cali’s poor, marginalized neighborhoods. As a photojournalist in the 1960s he documented rural massacres as well as riots in some of the city’s toughest areas before meeting Alegre Levy, a young cultural reporter who introduced Franco to the realm of art and culture, allowing him to discover the aesthetic possibilities of a medium whose technical aspects he had mastered so well. Although Franco would never establish himself as a full-time, professional artist and continued for many years to sustain his photographic practice by working in advertising, he produced several extraordinary series documenting the various stages of urban destruction and transformation in Cali and neighboring areas, becoming something of a cult figure for subsequent generations. Among his most celebrated series is Prostitutas (Prostitutes, 1970), a group of black-and-white photographs of women and girls working in one of the last brothels in Buenaventura, a declining city that had once been a prosperous port. He first showed the work at Ciudad Solar, and it was restaged by Helena Producciones almost three decades later — along with works by Caicedo, Mayolo, Ospina, and Muñoz — in an effort to preserve the achievements of that generation while positing the need for a renewed aesthetic engage­ment with a society still in crisis. 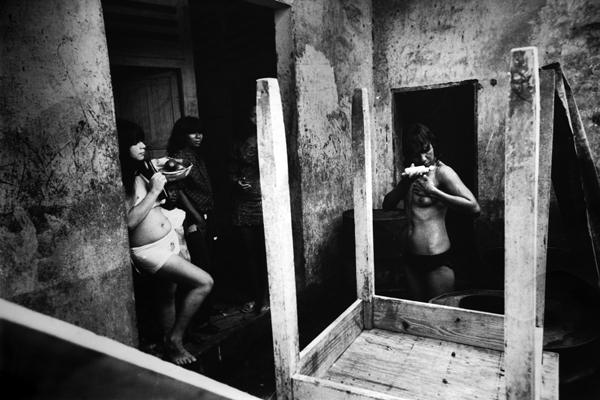 Shortly after Terror y escape, Helena began focusing exclusively on the activity for which it has become best known: the organization of the Festival de Performance de Cali. Initiated by Wilson Díaz and Juan Mejía (prior to the existence of the collective) in 1997, the festival began as a relatively informal one-day event that featured (among other actions) an artist who quietly defecated in the corner and then ate what he had excreted with slices of bread and apples; an invitation to snort lines of cocaine form­ing letters that spelled out the names of canonical figures such as Joseph Beuys and Hélio Oiticica; and a serenade to a lover on the eve of his departure from the country. Like the collective itself, with its con­stantly shifting configuration of members, the festival experienced many transformations, mostly related to funding, over the next decade. Yet its spontane­ous, sometimes chaotic, and democratic character endured. As a forum in which a great many artists — both emerging and established, Colombian and international — have participated, the festival helped resuscitate the vitality and status of the cultural scene of a city that once contributed greatly to the coun­try’s artistic and cultural patrimony. The medium of performance, with its economical nature and inherent element of surprise (as Mejía has pointed out, you never know what the work will be until it has taken place), has proved most appropriate to the precari­ous, unstable context of life in Cali.

Michèle Faguet is a writer and independent curator. As director of nonprofit exhibition spaces (Or Gallery, Vancouver; Espacio La Rebeca, Bogotá; and La Panadería, Mexico City), and as adjunct curator of the Alliance Française in Bogotá, she organized numerous exhibitions and coordinated the presentation of many new works by artists from Europe and the Americas. She taught critical theory at the Universidad de los Andes, Bogotá, and has been a visiting curator at the Banff Centre, Alberta, and a guest lecturer at the Curatorial Practice program of California College of the Arts, San Francisco. In 2008 she received a grant from Creative Capital | Warhol Foundation Arts Writers Grant Program for her research on pornomiseria. She currently lives in Berlin and writes regularly for Artforum, Art Agenda, and Afterall.