Show Me the Money: Context - The Big Picture

Show Me the Money is an earnest attempt to get people to talk about money in the visual arts. 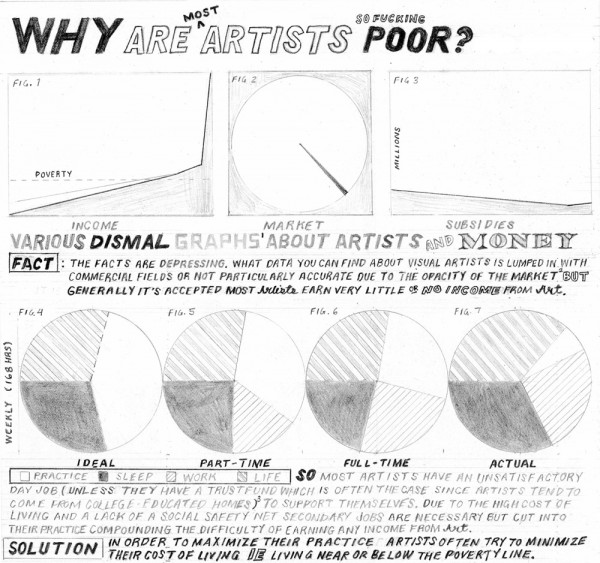 William Powhida for W.A.G.E., Why are artists so fucking poor? (detail), 2012; Courtesy the artist

The Big Picture: Artists, Organizations, and the Economy

Notes on an Alternative Economy by Christian Frock
“Question — What are the active models of creative autonomy that work within the existing limitations of the system? How can I make the work that I want to make and still make a living?”

Can you make any kind of living as an artist?
The Guardian, 7/29/12
“Even established artists find it hard to make ends meet. In March, Susan Hill took to her Twitter page to claim that, despite the film adaptation of her bestselling book The Woman in Black having grossed more than £100m worldwide, ‘I am still broke.’ “

Arts Organizations Get Creative for Fund-raising in a Tough Economy
Future Leaders in Philanthropy, 2/23/11
“To capitalize on the clear dichotomy between increasing (if changing) demand and decreasing funding, creative resource mobilization strategies are more relevant than ever before for the nation’s 109,000 nonprofit arts organizations and 2.2 million working artists.”

The Arts Needs Better Arguments
Wall Street Journal, 2/18/09
“The arts are going to need a better strategy. And in the end it’s going to have to come from art itself, from the benefits art brings, in a world where popular culture — which has gotten smart and serious — also helps bring depth and meaning to our lives.”

How the United States Funds the Arts
Published by the NEA, this report differentiates the roles of federal, state, and local agencies, as well as other public entities, along with descriptions of private sources of support. The conclusion describes the complex and evolving web of funding resources.

** Total industry spending determined by measuring the spending of 9,721 nonprofit arts and culture organizations and 151,802 of their attendees. Dinner and a show go hand in hand. Attendance at arts events generates income for local businesses — restaurants, parking garages, hotels, retail stores. An average arts attendee spends $24.60 per event in addition to the cost of admission.

W.A.G.E 2011 Survey Report
Download full pdf here.
The purpose of the W.A.G.E. Survey was to gather information about the economic experiences of visual and performing artists exhibiting in nonprofit exhibition spaces and museums in New York City between 2005 and 2010. On average, the majority (58.4%) of respondents did not receive any form of payment, compensation, or reimbursement for their participation, including the coverage of any expenses.

Statistics to start a conversation by Joseph del Pesco for State of the Arts
“California has the most artists, is one of the richest states, and has the least state arts funding. If every artist in America’s workforce banded together, their ranks would be double the size of the United States Army. More Americans identify their primary occupation as artist than as lawyer, doctor, police officer, or farm worker. Shouldn’t artists have a voice as much as these and any other professions?”

Center for Cultural Innovation, Next Gen Survey Results
“Leaders in the nonprofit arts world, many of them founders and builders of their organizations for decades, will be retiring in unprecedented numbers in the coming years. Organizations could become weaker and destabilized during this transition, a prospect that should be addressed with some urgency. Younger professionals should be able to take on these leadership roles and chart a new course in stressful and changing times. Yet an operational divide between the workplace needs and values of Next Geners and those currently in charge threatens this transition.

It does not help that the nonprofit arts field suffers from a paucity of training and professional degree-granting programs, low pay, long work hours, and inadequate career advancement opportunities. The generation that sparked a powerful nonprofit arts movement more than thirty years ago now wonders about their successors: Are they motivated? Prepared? How can we recruit, train, nurture, and retain them?”

Financial Engagement: A Public Thing (pdf download)
A Public Thing is a group of artists, writers, thinkers, and doers who are dedicated to preserving and building the public realm — spaces that are open and accessible for people to come together and engage in conversations pertinent to today. About 50 people gathered at Peavy Plaza in downtown Minneapolis to talk frankly about money, debt, big banks vs. credit unions, financial dependence/interdependence, and how all this affects our communities. Financial Engagement: A Public Thing was run by Shanai Matteson and Colin Kloecker from Works Progress; Sarah Peters and Molly Priesmeyer from Good Work Group; Sam Gould from Red76; Molly Balcom Raleigh; and a growing group of artists, designers, and writers.

Artist Bloc No. 1: Is Art Labor?
Put out by Artists of the 99% in November 2011 (http://artistsof99percent.tumblr.com/)
“We are artists and art workers of the 99%. We are struggling to survive and sustain our creative practice in an economy that does not value us as workers, that privatizes cultural institutions, and that continuously defunds art programs — from public education to government grants.”

Andrea Fraser’s essays:
“L’1% c’est Moi,” was written in August 2011 for the Berlin-based publication Texte zur Kunst. It focuses on the direct relationship between art-market trends and income distribution.

“There’s No Place Like Home,” her contribution to the 2012 Whitney Biennial, takes the form of art discourse but also focuses on the role of art discourse in the art world today. The artist elaborates on the contradiction between what art is socially and economically — often, essentially, high-valued luxury goods and investment vehicles — and what artists, critics, curators, and historians say that art does and means.

Art Work, published by Temporary Services, distributed by all
A national conversation about art, labor, and economics. Art Work is a newspaper and accompanying website that consists of writings and images from artists, activists, writers, critics, and others on the topic of working within depressed economies and how that impacts artistic process, compensation, and artistic property.