“Many thanks again for the guided tour through the Bay Area. It was one of the richest evenings during our trip: in one night four artists for documenta 5. This is to confirm the documenta will officially invite for participation Terry Fox, Howard Fried, John C. Fernie, and Jim Melchert.” – Harald Szeemann (correspondence with Carol Lindsley, Reese Palley Gallery, San Francisco, December 16, 1971)

“In recent years many of our most talented artists have moved toward anti-object, process and conceptual directions. For this reason the series has taken on a very different look than prior presentations.” – Gerald Nordland (Director’s forward, The Arts of San Francisco, 1971, San Francisco Museum of Art) 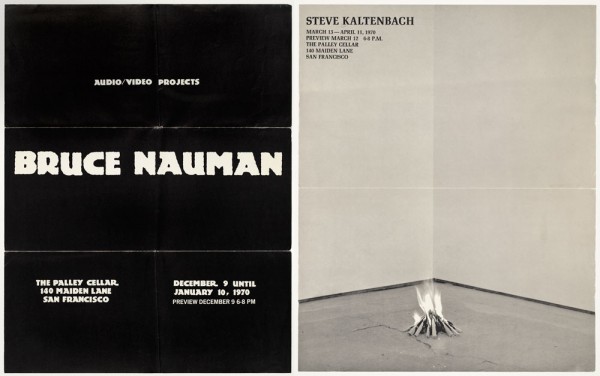 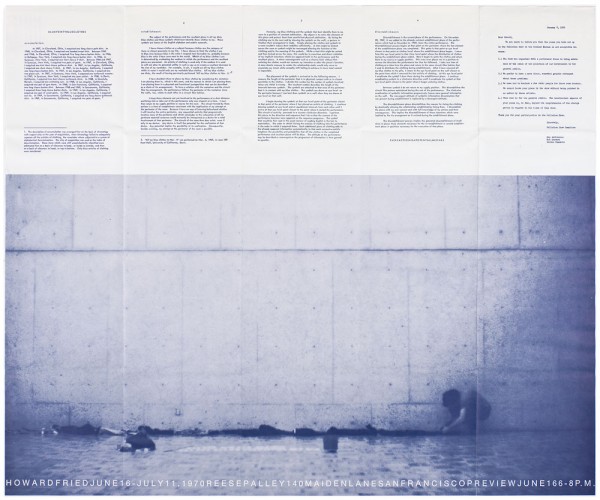 Howard Fried, 1970 poster, 28 1/2 in. x 35 in. (72.39 cm x 88.9 cm); Includes the artist’s statement on the pictured All My Dirty Blue Clothes (1969) as well as a letter from the curatorial committee of The Pollution Show (1970) at The Oakland Museum. They declined to include this seminal work and its accompanying text because it did not clearly address the eco-art premise of the group exhibition. The work was not included in Fried’s show at Reese Palley, but was later revisited in 1979 at SFMOMA, among other presentations. 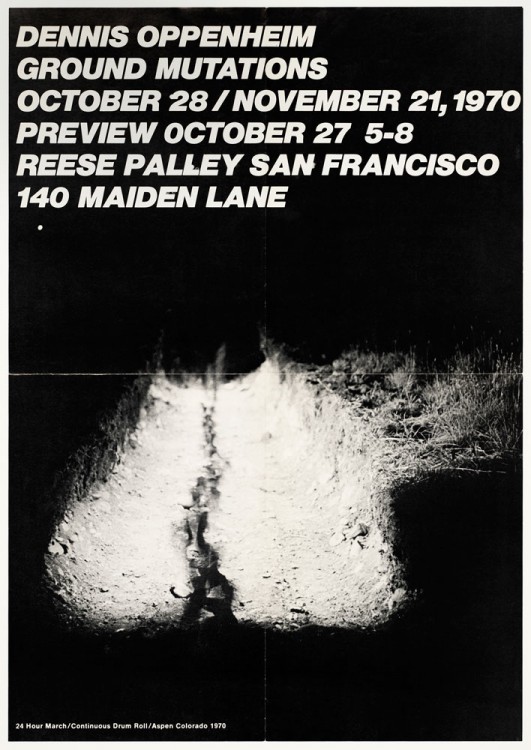 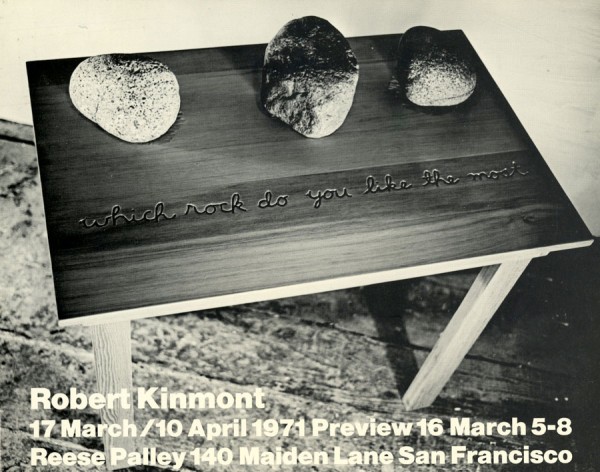 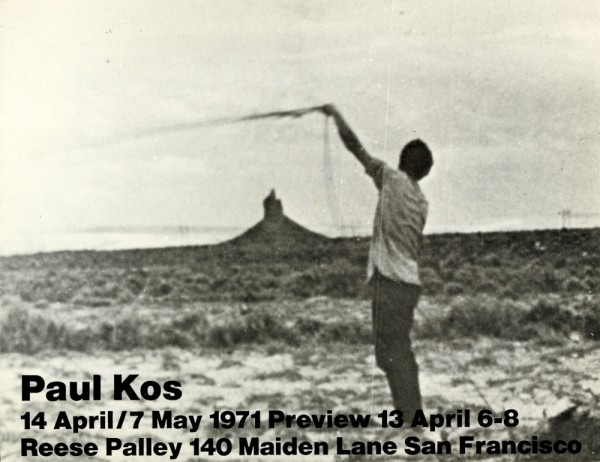 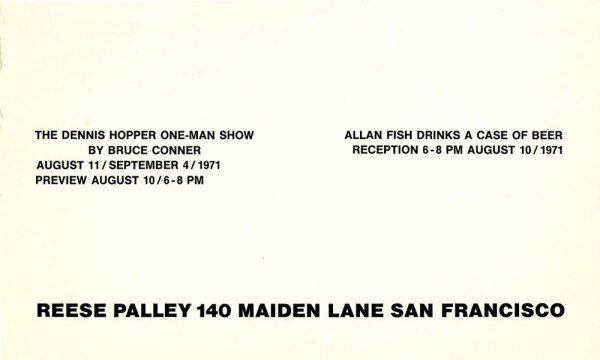 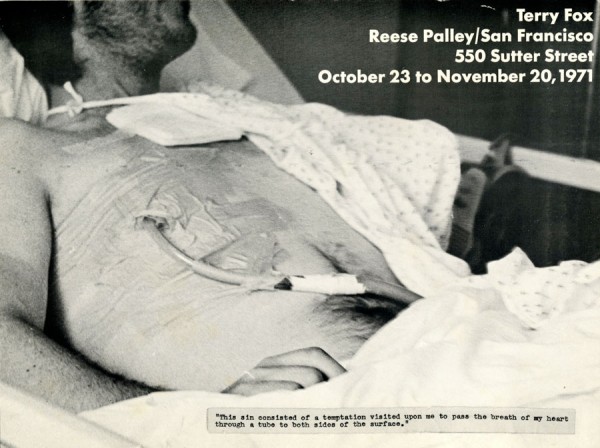 Terry Fox, 1971, card, 8 in. x 10 3/4 in. (20.32 cm x 27.31 cm); Fox’s exhibition statement notes: “The poster photograph is meant to combine with the quote and produce a strong enough reaction in the viewer that he enters the gallery with conscious or subconscious expectations similar to those experienced in a hospital…The entire piece was completed in my mind and in my notebook before I left the hospital.” The artist suffered from Hodgkin’s lymphoma and had frequent hospital stays that year before a major chest surgery in January of 1972.

In June of 1968 the Atlantic City-based dealer Reese Palley opened his eponymous art and design gallery in San Francisco after restoring the V.C. Morris Gift Shop at 140 Maiden Lane, the only example of a completed Frank Lloyd Wright building in San Francisco. Built in 1948 in anticipation of Wright’s Solomon R. Guggenheim Museum, the circular-themed space (today Xanadu gallery) features the distinct interior elements of a spiral ramp and skylight ceiling.

While Palley’s empire of galleries were largely dedicated to the display of Boehm ceramic birds, for a few critical years he began supporting new directions in contemporary art. Exhibition curator Carol Lindsley’s vision for encouraging experimental work its cellar space came to define the San Francisco gallery, in particular her contributions to bringing visibility to installation, performance, and Conceptual art in the Bay Area. The gallery not only supported many of the artists above with solo or focused group shows in the beginning of their careers, but her exhibition program foregrounded major experiential installations, projected image and performance-based works. A generation of artists would be influenced by seeing the early video work of artists like Bruce Nauman and Dennis Oppenheim who had recently moved away. Examples of installations featured in the space include Stephen Kaltenbach‘s sensory heaven and hell environments (1970) and Paul Kos‘s kinetic sand piece sifting through a hole in the floor between the top and bottom galleries (1971).

As SFMOMA curator Suzanne Foley reflected in the publication for her 1979 museum survey on Bay Area Conceptual art and performance, Space / Time / Sound-1970s: A Decade in the Bay Area, Lindsley’s programming for the few years of the gallery’s operation was regarded as “a barometer for the most vital work to be seen in the area.” The initial local institutional representation of many of the conceptual artists largely came via the regional lens of invitationals, annuals, and surveys. At SFMOMA for example, several artists from Palley’s roster received solo or four-person shows as part of the 1967 and 1971 summer long roll-outs of the last of the The Arts of San Francisco series or they were up for the museum auxiliary’s juried SECA Award program for artists of ‘exceptional promise’. At the same time, several of these leading figures were being contextualized with their contemporaries in such high profile international exhibitions as documenta 5 (1972). The Reese Palley gallery directors fostered exchange between the East Coast and West Coast artist rosters; Terry Fox, Howard Fried, and Tom Marioni held shows in the Soho gallery (1970-72). Reese Palley’s warehouse storage space on 16 Rose Street was converted into live-in studios rented to artists in the area. This daily environment was the site of several key performance and video works by Fox and Fried.

In September of 1971 the gallery relocated to 550 Sutter Street, which lent itself to larger installations. Many of the artists above among other painters and sculptors Reese Palley additionally presented appear in Jim Melchert’s Faces (1972), floor-to-ceiling slide projections of close-ups of over 100 artists he encountered in the month of April. This artist community portrait was included in one of the last exhibitions before Lindsley’s departure in August of 1972. 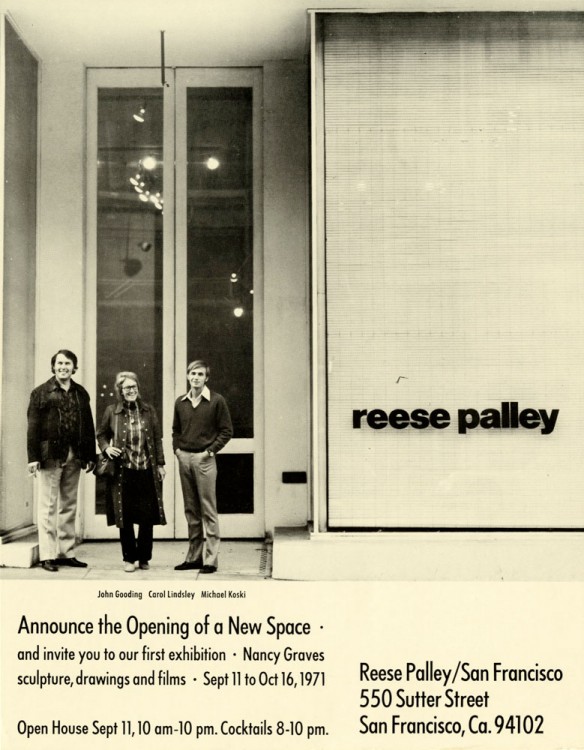