“I had the idea that my outdoor work was going to appeal to two different audiences: my friends and the artists who received mailers on this will look at it as artwork. And then there’s this mass audience of people going to and from this area every day who will see these things outside of an art context. How it will affect them I have no idea. Out of a thousand people maybe 10 or 15 will notice and wonder what in the hell it is — and that’s an interesting idea to me.” —Cherie Raciti (Philip Linhares, “Cherie Raciti: Doing It in the Environment,” Currant, April–May 1975) 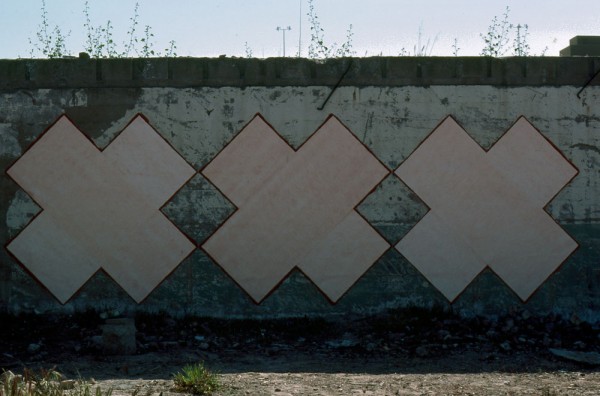 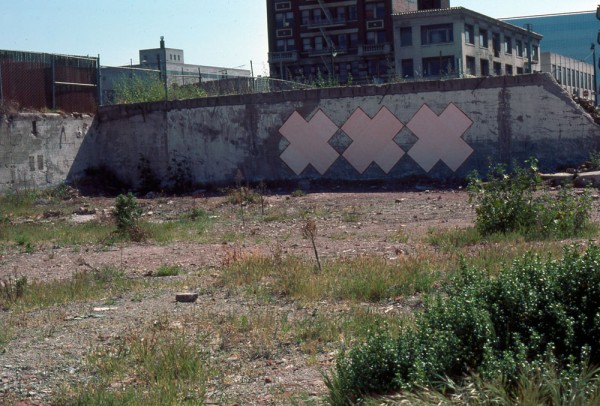 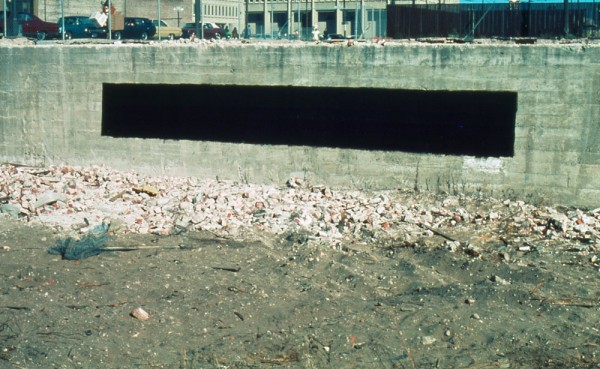 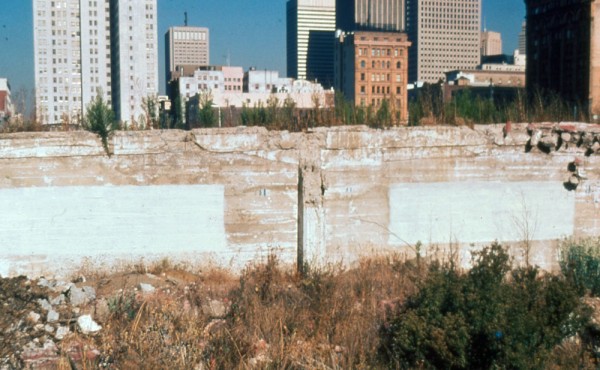 Amidst the ruins of razed buildings in San Francisco’s South of Market area during the mid-1970s, Cherie Raciti created a remarkable body of site-specific paintings in relation to the urban environment. When Raciti moved to the Yerba Buena neighborhood in 1970, the redevelopment of the district was under way. While the waves of evictions and extensive demolition had moved quickly, the new building activity was stalled for a number of years until the outcome of litigations was determined.

Observing these changes during her daily walks through the neighborhood, Raciti began to regard the area as an extension of her loft studio at Fourth and Brannan streets. In August 1973 she installed small fiberglass-and-resin works made in her studio onto abandoned residential hotels along Third and Fourth streets. In her studio notes from 1975 she relates how “[a]s more buildings were torn down, the space opened and the remaining structures — wall fragments from basements and underground parking garages — began to create a new environment and new possibilities. It became obvious that I should begin to work with these structures by executing the paintings directly at a chosen site.”

Raciti sought to integrate her minimalist forms within the desolate frontier of vacant lots overtaken with weeds and mounds of rubble and trash. Viewed at a considerable distance, the first large-scale installation, Black Fabric Wall (1974), appears as a dark void in the photo documentation. Double White Wall and Air Wall (1974) respond to the unique features of the board-marked concrete, and existing painted symbols and markings on the basement lots. All of these works introduce an enigmatic presence into the place.

The site paintings marked an explosion of scale in Raciti’s practice, which would inform her parallel presentations of indoor work — large, monochrome paintings characterized by their luminous, translucent color and reconfigurable modular forms assembled into various weave patterns and X’s. She employed a similar vocabulary and process in creating works on-site: cutting industrial fabrics into rectangular strips and permanently adhering them to the wall with coats of acrylic polymer, left clear or pigmented. Each discrete and semitransparent geometric shape became integrated into the textured ground of the wall, playing with the relationship between pattern and figure, surface and support.

She installed the works on the weekends, when the area became quiet, although there were still risks involved. Her use of industrial materials extended the life span of these outdoor pieces. The plastic films she used were quite resilient, remaining largely unchanged, with minimal fading and accumulation of dirt. The layers or dressings applied to these building cuts slated for removal were eventually cleared away for what is now the Yerba Buena Gardens complex bordering SFMOMA’s current building on Third Street.

Raciti’s Yerba Buena works offer an extraordinary and rare example of abstract painting that not only was shown anonymously outside of the gallery context, but was inherently nonprecious and unsalable. Her work dovetails with the rise of performance and sculpture activity that moved out of the studio and into the streets, while occupying a unique position and different set of concerns. And it stands in contrast to much of the figurative and representational modes associated with street art, including the mural and graffiti movements in that area in the 1990s.

Raciti’s pioneering environmental work was supported by artist-run spaces and projects founded in the mid-1970s that sponsored off-site or public projects: The Floating Museum (Tropicana Wall, 1975, Las Vegas) and 80 Langton Street (Last Yerba Buena Wall, 1977). The latter is the only work I had seen prior to looking at the photo postcards on file — and later, the artist’s slides that we’re excited to be able to share here. 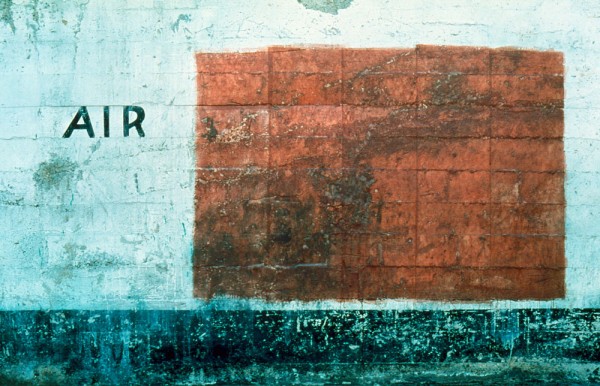