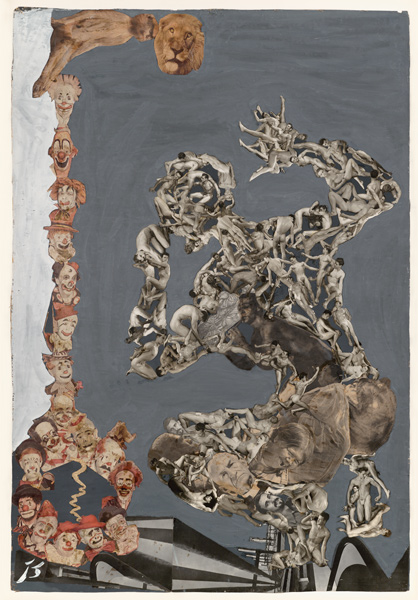 The return of the One on One: artists, poets, and others reflect on single works in SFMOMA’s collection. Please welcome writer Robert Glück.

In 1951 Jess made The Mouse’s Tale, the first of his large collages, or “paste-ups,” as he called them. Only a few years before he had been a radio-chemist working on the production of plutonium for the U.S. government. He abandoned science and rational method when he dreamed the world would come to an end in 1974. The nude in The Mouse’s Tale crouches on contradictory perspectives of a chemical refinery.

Jess’s marriage to the poet Robert Duncan also began in 1951, and it lasted until Duncan’s death in 1988. Their household made a world, and Jess dispensed with large parts of the world outside. Art was a kind of exalted play that demanded unalloyed sincerity and concentration. Unwilling to be distracted, he discarded his family along with his last name, declined to attend his own openings, and spent years — even decades — on a single work.

The San Francisco Museum of Modern Art acquired The Mouse’s Tale in 1976, so I’ve been looking at it for 36 years. It always arouses me with its dual dramas legible from different reading distances. First I see the large nude silhouette with its skeletal head and ample butt, fingers splayed in terror. Then I see the abundant nakedness, more suggestive because the eye discovers and coaxes each body out of a shrubbery of more nakedness. The composite nude (like an Arcimboldo, or a Surrealist mannequin) confuses life and death, an uncanny effect that Jess complicates by using photographs of living people. They are both fiction and flesh, “characters” who, away from the camera, age and die with us, or before us. Jess puts a strange pressure on the images to be, at once, scraps of paper and actual depths to fall into.

How long can I track little naked men in an artwork in a museum before I seem subnormal to the guards and to myself? I’m amazed that Jess at midcentury could accept at face value the innocence and delight of those Physique Pictorial–style photos, the childlike wonder hitched to adult sexuality. He dropped two snapshots of himself — the young Beat with a goatee — in his animal cracker soup of “homoeros,” along with a Navajo woman, a minister, a panther.

I was grateful for this startled naked figure whose third dimension is always in danger of being cancelled by the myriad perspectives of the men who make him up. Caught in his confrontation with some greater power, he turns away from the viewer, perhaps in self-horror, perhaps unaware that his body is a swarm of Lilliputian exhibitionists, tireless multipliers of sexual urge. It was 1976; I had a ticket to the orgy, but that freedom did not eliminate the pervasive fear. Beside the nude stands a monkey gallows. Surveying the world, a cat/lion, symbol of empire, is the knot of the rope as well as judge and jury. If the man is found guilty, he’ll be hanged by a rope of clowns. Do these soft old spirits say, “Your death is a joke”? The gray universe is already condemned, already hanging in the gaudy noose. If the man is a mouse, then his tail restates the proposition of that universe, Lewis Carroll’s calligram, the squiggle-shaped “Mouse’s Tale” in Alice’s Adventures in Wonderland:

“Fury said toa mouse, That he met in the house, ‘Let us both go
to law; Iwill prose-cute you.—Come, I’ll take no de-nial: We must have the trial; For really this morn-ing I’ve nothingto do.’ Said the mouse to the cur, ‘Such a trial, dear sir, With no jury or judge, would be wast-ing our breath.’ ‘I’ll be judge, I’ll be jury,’ saidcun-ning old Fury; ‘I’ll try the whole cause, andcon-demn you to death.’”

In 1951, Jess was still assimilating the influences of his teachers Clyfford Still and David Park. He discovered fantasies in his own “nonobjective” paintings (and in Still’s work). He would entertain these scenes for a while, then perhaps paint them out. That is, abstract paintings are romantic environments: vistas of aspiration that generate story along with profound mood. Does that seem obvious in retrospect?

I’m a writer who learned from visual art, and Jess was an artist who learned from literature. In the fifties, he solved the exact puzzle I was working on in the late seventies — how to tell a story that also knows itself as writing, at once “a made-up thing and a depth in which my being is,” as Robert Duncan said. Jess declined to recognize a dichotomy between abstraction and representation or to take sides in a debate that fueled Bay Area art and writing for decades. His solution was pastiche and appropriation — a material-based aesthetics that narrates through the mystery and authenticity of salvaged images.

It would be a mistake to take the two gouache background fields for granted. They are the matrix for the colorless world of the nude: images are drawn out of  them with the addition of white or gray. The universe he dreads is the universe that makes him, a crucible of image-making. If that contradicts without altering the playful eros of the work, then we are exactly in Jess’s terrain.

Maybe some of the nude’s anxiety derives from Jess’s own horror vacuui. Henceforth the paste-ups would be so densely layered with images that they convey the kind of wonder found in Victorian fairy paintings like Richard Dadd’s — a wonder based on abundance and meticulousness, as though the artist performs a slow task in a fairy tale, say, counting grains of sand:

Once there was a mouse vulnerable yet something that —

Once there was a mouse that turns you into a homosexual.

Ocular criminal in a gray universe, Fury the cat trapped our citizens in a quaking body.

An incy-bincy mousy called LIBIDO made of nothing — gray and white scraps.

Robert Glück is the author of nine books of poetry and fiction, including two novels, Margery Kempe and Jack the Modernist, and a book of stories, Denny Smith. Glück prefaced Between Life and Death, a book on the paintings of Frank Moore, and he edited, along with Camille Roy, Mary Berger, and Gail Scott, the anthology Biting the Error: Writers Explore Narrative. Glück was codirector of Small Press Traffic Literary Arts Center, director of the Poetry Center at San Francisco State, and associate editor at Lapis Press. His first book of stories, Elements of a Coffee Service (1982), will be republished in fall 2012 by Ithuriel’s Spear.

This piece was originally written for Artforum in 2000; it has been revised for Open Space.

Tags: Jess, One on One, rgluck, Robert Gluck