The Visual as a Quickening Sound Vibration: An Interview with Musician Oluyemi Thomas, Part III

Originally from the musically rich Motor City, Detroit, Michigan, Oluyemi Thomas has been a San Francisco Bay Area resident since 1974. Thomas studied both music and mechanical engineering at Washtenaw College. He creates ordered compositional free music that he acknowledges as part of, but not limited to, what is called jazz. Over a career spanning decades he has performed with Cecil Taylor, Joe McPhee, Henry Grimes, and William Parker, amongst others, and he has made several compelling recordings. This is part III of a three-part interview that focuses primarily on his full-color illuminated musical scores and the things that inspire their creation. Part I of this interview focused on his background as an engineer and how that influenced the language and syntax of his music scores. Part II focused on some of the spiritual inspiration for his compositions and his description of how they are played. In this third and final part he discusses the particularities of his musical systems and describes some of their graphic details. 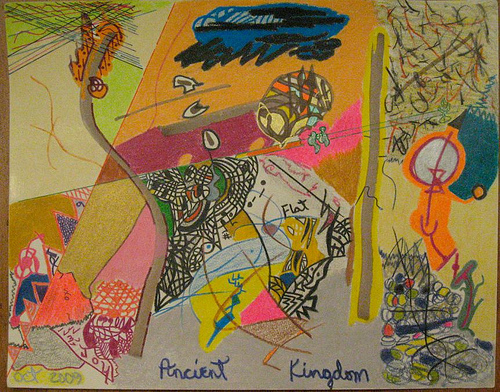 Duane Deterville: Creating music using the process that you just described to me, is there a ritual aspect to it?

Oluyemi Thomas: Well we could say “ritual” but I don’t want to confine it to being something special, special…you know, I mean…

Deterville: The question is wide open. I want you to elaborate on what that means for you.

Thomas: Yeah. Right. There is a discipline to it. But I don’t want to make it be something so grand. It’s just something that I do. I try to keep it simple. It’s something that I do but I’ve got a system for how I do it. You know, I’ve got certain music systems that I’m working out of that are a framework for certain pieces. You know I’ve got certain ones. I’ve got different titles for certain music systems that I’m working on that enable me to launch into the musical piece and launch out of the piece.

Deterville: Different titles for the music systems? Can you give me examples of that?

Thomas: Yes, well one of them is the Victory System. One is the Abolaeton System.

Thomas: Yeah, those are the first parts of my two daughter’s names. That’s the name of this horn. This bass clarinet is named Abolaeton. Abolade is my firstborn and Etonde is my second. Abolade means a child that has come with honor and Etonde means a person of wisdom so I abbreviated it to mean ‘honor wisdom’. When I go to the horn I try to go with reverence and to try to honor the wisdom that will come through if I can get myself out of the way.

Thomas: Right. There are other systems too but I’ll just deal with those two.

Deterville: Just for a record then, how many systems do you work with?

Thomas: [Laughs] I’m not sure. I’m not trying to compile a library shelf of what I’m doing from an analytical point of view. Some are untitled systems, I just know them from different registers that can be played on the horn. A whole system of other things can potentially take course from that. Being in this upper register, moving at a certain velocity and with tonal centers, mobile tonal centers and so forth. But anyway, the Victory System, that came first. Really that’s probably the axis of all of the systems. There are four Victory Systems for any system that I’m working with. But these other systems they differentiate out of that. That’s the axis. That is the axis out of which the other systems rotate. I guess you could call it the collective center. It is the collective tonal center.

Deterville: Did you create it sequentially first. Was that the first one or did it come later on and you decided or understood it as being the first?

Thomas: I was operating out of it. I just didn’t title it. I didn’t think of it as a system or a type. You know I was just moving towards the best way I can get to some information, process it and move it forward. These things happen organically. Its not like I sit down in a think tank where I say I want to create a system. Once I became aware that what I was doing was systematic then I began to take it all more seriously.

Deterville: So the Victory system is the central system and the others, would it be proper to say that they orbit the Victory System?

Thomas: Yeah, Yeah. For now I could say that. (Laughing) Some years from now I could be totally wrong about what I said. (Laughs)

Deterville: You have a title for each composition. Also, you were talking about some narrative stuff. Does that mean that since you’ve constructed the symbols in a certain way and it evolves out of your engineering practice that you could show someone how to read the same thing and improvise over it?

Deterville: And would we be feeling a narrative sequence in doing that?

Thomas: If the narrative is not there I’m not going to work the piece. Because there is no reason to it. The creator don’t play that, man. You have to come up here and tell me something. It has to be the truth. We’re living a truthful life. There is nothing here that is counterfeit. Humans can counterfeit it, but that truth says ‘I don’t counterfeit.’

Deterville: Describe one of the compositions? 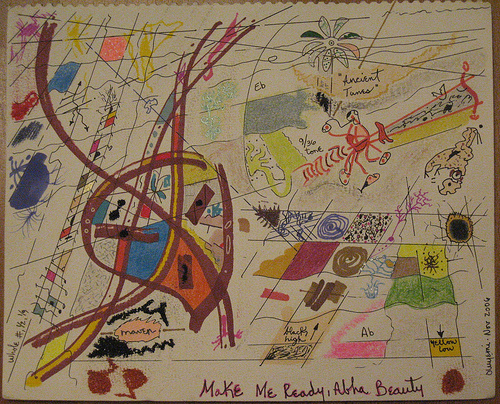 Thomas: This one is entitled – they both are the same- there’s part one and part two. This is entitled “Make Me Ready Abha Beauty.” The composition “make me ready…” is about people preparing themselves to live inside of themselves so that they can live outside themselves, which is manifested in our actions. And then “…abha beauty” means, Baha’u’llah. He’s the promised one of the Bahai faith. And “…beauty” represents his teachings. His teachings give us a beautiful way to look at everything. Yeah, so that’s the name of this score. It has different cities of the heart that we visit.

Deterville: I can see in the lower right hand corner that it says ‘yellow low.’ And ‘A-flat.’ 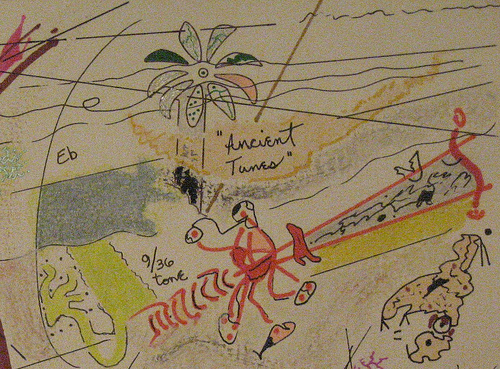 [He turns and picks up the second composition/drawing.] 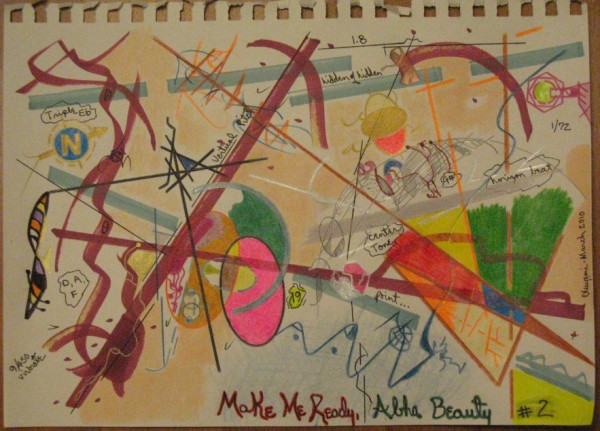 This is part two to “Make me Ready…” I just finished this today. I’ve been working on them for three months now. And when I looked at it today I said man this is a continuation of this other composition. The second part was in my horn case with some other scores. I just hadn’t put it together. I’ve been working this piece. I worked it this morning. So when I heard the piece this morning again, I realized that this is part two. I’ve been working on part two but I just hadn’t scored it. I take the piece like I said and I invert it, reinterpret it and so forth. I got this out of my horn case so that I can have it when I’m ready to work. Then when I looked at this piece while the other one was over on the drawing pad. I said to myself, ‘man this looks similar.’ I realized that this is part two and I just didn’t know it. So I put the title in there and declared that I was finished. I put a couple of other things that I just added to it today. I heard these things, because I practiced earlier this morning. I heard something and so I scored it.

Deterville: What did you add today? 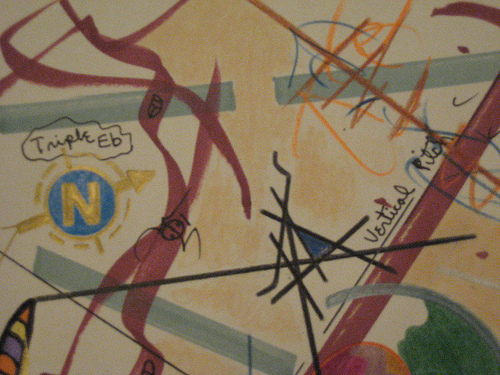 Thomas: I added these notes. That, triple e-flat, vertical pitch, head of the hidden, 1.8 (one point eight), 1/72 (one seventy second), horizontal beat, center tone, point. And then there was a couple of other things that I added. Some colors that I laid in here too. 19 (nineteen). Some other encounters on the journey. These are unknowable realities. Unexplainable realities that are part of the journey. You will hit these unexplainable realities as you go on. G-sharp. I put the words ‘center tone’ because you’ve got to be centered. And being centered has a tone to it. Everything that has a center has a tone. You see, each one of these colors has a sound. Colors all of them have sounds. Kandinsky talked about that. He says, all of the colors have a sound you dig. See, cats be tryin’ to nail it down. They ask, ‘how is this and music the same?’ I say, there’s no divide. At least the way I’m taking it in. Now, they can see it differently. Fine, that’s cool, but this is my score and this is my instrument. So when I manifest, I manifest. When I share it with some other musicians, they hear something off of this.  I set a thrust and they hear something that might be perpendicular to where I’m going. I play this parallel (He is pointing to a spot on his score) and they play the perpendicular. What makes it work is that we agree to systematically do it at the same time. See? I might play an E-flat and their response is silence. They hear a silent tone. How about if I do a triple silent tone? I’m going to do three counts of this silent moment. They can be at different velocities. They can be at…(demonstrates with hand movements silently the velocity of the silent ‘tones.’) or they can be at…(demonstrates with rapid hand movements the more rapid ‘silent tones.’). I can change the velocity of it. 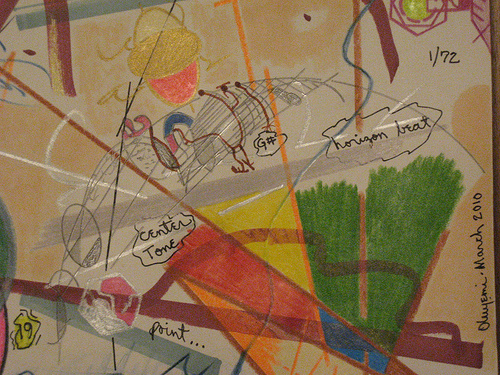 You see these compositions. These lines. There’s a systematization to the journey. You dig? I could take this section here and play it a good two hours alone.  Or, I could play a whole week on just this section. See, because I can take this front view, I can take this side view and all of that. See?

Deterville: You know on this two-part piece that you just showed me I was noticing this violet colored area right here. It looks similar to the violet area that starts on part two of “Make Me Ready Abha Beauty.” Is that partly what gave you the idea that these are two parts of the same composition?

Thomas: Yeah, that’s what I was looking at. I used the same pen to create the thickest lines on the space. So I said, ‘you know what these pieces are connected, I just didn’t know it. I put the title on it and made it official. (laughs) I asked the piece ‘are these two parts the same?’ The piece answered, ‘you already know that.’

Deterville: And you can ask it because it’s a living entity.

Deterville: How would you describe your compositions?