PUSSY RIOT Is So Dangerous 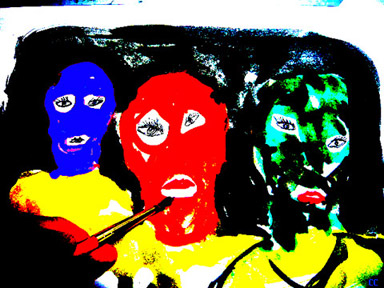 Why do vaginas upset people so much? Just say the word vagina or pussy and people freak out. Seriously, try saying the word or a variation of it — vagina, pussy, cunt, hole, twat, or snatch — in mixed company, and just watch as someone gets really uncomfortable. These days if you want to be provocative, just name your project pussy-something or hole-something. It really works.

In fact, before Pussy Riot became a world famous all-female punk band, one of the coolest galleries in New York was called The Hole. And then there is Courtney Love’s band, simply called Hole, famous for songs like “Skinny Little Bitch.” Yet far from being the mature, progressive society we think we are, even in 2012, it’s ridiculous how many people still freak out about female sexuality. Even the words that describe it are still considered taboo and dangerous.

By now everyone has heard that members of the Pussy Riot have been sentenced to two years in prison for “hooliganism.” They were arrested for a protest earlier this year at Moscow’s golden-domed Christ the Savior Cathedral. Were they arrested for damaging property, hurting someone or lighting fires? No, they were protesting the fact that Vladimir Putin’s former colleague in the KGB, Kirill Gundyayev, had become leader of the Russian Orthodox Church and was using the church as a way to legitimize Putin and the security forces that control the country. Hence the protest inside the actual church, where staged political events happen. To Pussy Riot it looks like the KGB is now running both the Russian government and the Russian Orthodox Church — and they don’t like that one bit. They view it as a naked abuse of power.

Yet despite the shamelessly enthusiastic prosecution of the women, this kind of overreaction is not unique and is actually part of a larger trend. The jailing of nonviolent protesters is common both in Russia, where dissent and freedom of speech are routinely punished, and around the world, including in the U.S., where 700 Occupy Wall Street protesters were arrested last year in New York. Most protesters, though, do not become famous, do not appear in the paper, and most simply rot anonymously in prison. But that’s not what is happening with Pussy Riot.

Since they were arrested, there has been an outpouring of support from around the world. Protesters from Barcelona to Manhattan to Paris put on their own brightly colored knit ski masks (like the band wears) and held rallies in front of Russian embassies, shouting, “We are all hooligans now!”

In a letter of support, former Beatle Paul McCartney told them to “be strong,” adding, “I, and many others like me who believe in free speech, will do everything in our power to support you and the idea of artistic freedom.”

The three women who were sentenced today were members of Pussy Riot, which is actually a music collective. They are Nadezhda Tolokonnikova, 22; Maria Alekhina, 24; and Yekaterina Samutsevich, 30; they have all been in detention since March. To see why people are so caught up by their case, just read the closing statements they delivered in court. It will make you a fan, too.