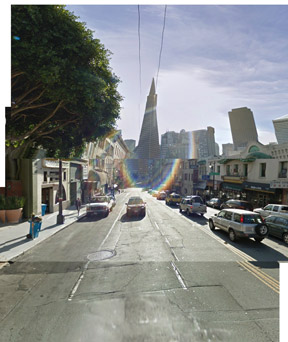 Bars aren’t just for doing cocaine in the bathroom with your straight-acting gay boyfriend and then watching the San Francisco Giants lose again on TV. No, at one time bars were the place where neighbors met each other, shared local gossip and complained about the mayor. It was where people went for birthday parties and had conversations. Nowhere was that more true than in San Francisco’s North Beach.

But it makes me sick to my stomach to see what’s happening in San Francisco. First they put a GAP on Haight Street, then they made the Cliff House unrecognizable. Then they moved Musee Mechanique to Fisherman’s Wharf, and a few years later the Golden Spike restaurant lost its lease after 86 years. Now, according to sfgate.com, Tosca Café’s rent has just gone up to $8,000 a month. If they can’t pay up they will probably get evicted.

I could be wrong but it looks like greed might be the primary force motivating the raise. The landlord, Roger Forbes, owns Déjà Vu Consulting Inc., and operates more than 75 very profitable strip clubs around the country. Unsurprisingly, Déjà Vu is headquartered in Lansing, Michigan, a world away from San Francisco where you can buy homes for under $100,000. To me it sounds like the rent hike is probably nothing personal — just business. But kicking Tosca out? Maybe Déjà Vu doesn’t really care about what neighborhoods it penetrates, but a lot of people do.

So while I am not personally against strip clubs, North Beach is a tourist destination largely because of its small businesses AND its strip clubs. It has had a red-light district for more that 100 years, but as times have changed, places like Tosca remain labors of love and making money is not the only reason for their existence. Like Vesuvio and Specs nearby, it has employed literally generations of aspiring artists, actors, and poets. If it was suddenly gone, that would be one less place for artists to work.

Some might argue that the landlord has every right to force Tosca out of business — and he does. But my point is that a whole ecosystem of people has coalesced around that bar, and they have made it a part of their lives. Removing such places then disrupts not only the property but the connections people have forged there over the years.

Unfortunately for Forbes and Déjà Vu Inc., Tosca is also known as the cop bar, because a number of off-duty police officers go there. Oh, and let’s not forget that on any given night local politicians and lawyers can be found there laughing and making jokes while sipping beers with friends. Even to the casual observer it kind of looks like they love the place. Did I mention movie stars show up there, too? They go there for a number of reasons, but I think mostly because people don’t hassle them or antagonize them. A few heads might turn, but that’s about it.

Once, I was with friends and felt very stared at. It was some guy sitting across the mostly empty room who, when I looked over at him, wasn’t staring at me at all. He was actually looking right through me. It was Sean Penn. Something was concerning him deeply, but it wasn’t me. People often say he is an intense guy, and they are correct.

Another time I went there when Mayor Willie Brown was drinking soda water and speaking quietly with the manager. As I entered I noticed the eyes of Brown’s bodyguard following me and my friend across the room as we found a seat. His body didn’t move an inch, just his eyes. I remember Willie had the radiant presence of a movie star, and everyone took notice, whether they knew him or not.

So would North Beach really be better off with yet another strip club, or if a sports bar replaced City Lights Books? Would the residents be better off if the 100-year-old Liguria Bakery, which sells fresh foccaccia every day in four styles, was turned into a cell phone store? What if Vesuvio and Specs were renovated into condos or turned into Domino’s Pizza shops? And wouldn’t Caffe Trieste’s prime location be a great spot for an upscale hair salon? Imagine all the money you could make!

While we’re on the subject, look at what has happened to the Mission district in the past few years. Bohemian cafes have vanished one by one. Book stores have almost all closed except for a few. Even Adobe Bookshop is near to closing its doors after 24 years of art shows, concerts, and poetry readings. In North Beach the old book stores are long gone, and from what it looks like, San Francisco is dangerously close to losing almost every last trace of its bohemian past.