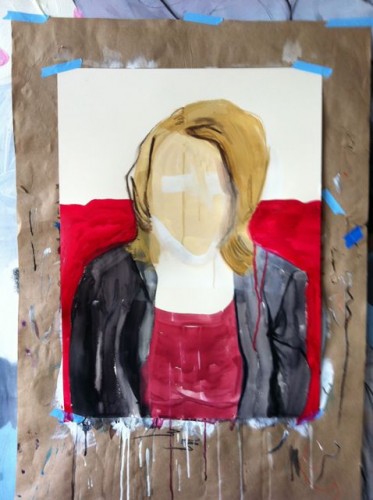 Early draft of my portrait by Zina Al-Shukri.

When our pictures are taken we want to look good. And when we don’t look good, we cringe. I’m thinking of the ubiquitous profile pic on Facebook where the camera is set extremely high and pointing downwards so the person’s eyes look huge, their face thin and elongated with a pointy chin, no problematic neck; if shoulders appear, they’re teeny, like a cartoon character’s. People post such distortions because they want to look good.  And last February, when I sat on Zina Al-Shukri’s couch in her Dogpatch studio as she painted my portrait, I was afraid of having to stare at this image of myself for three or four hours as it slowly emerged in gouache.  What if I looked ugly — would I be able to survive that intense immersion in my own ugliness. What I learned from going through this process with Zina, through seeing my face through her eyes, is that beauty has nothing to do with prettiness or Grecian proportions. Beauty is about planes and angles and their surprising interactions.

I’d take a break from my portrait and stare out the wall of windows in Zina’s studio at an azure sky with dramatic white clouds and a pale nearly full moon. As the day wore on, the blue of the sky gradually darkened and the moon grew brighter and brighter, and Zina kept marveling at the shapes she was seeing in my face. By the time evening arrived it no longer mattered if my image was attractive or not. My face looked alive to me, a pattern of interesting alignments. Zina painted me with two different eyes — one eye is tender, the other stern — a tense contradiction that excited her. She said that a portrait is about a process of vision, that what ends up on paper is a map or sketch of an interaction, and thus both eyes are accurate reflections of her shifting perceptions of me. 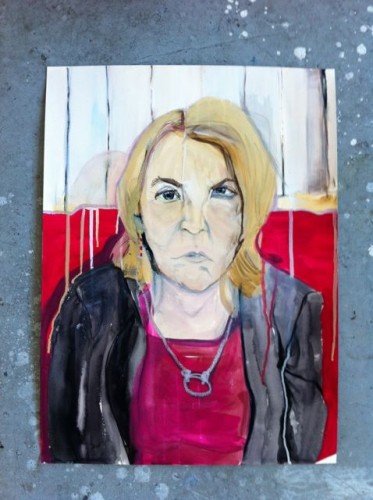 At a party recently, I was telling artist Kathleen Frumkin and her husband, linguist George Lakoff, about sitting for Zina. “Would you like to see my portrait?” I eagerly asked, and before they could answer I’d whipped out my iPhone, opened a photo of the painting, and thrust it at them, the way people do family snapshots. In the image I look matronly and imposing, like Gertrude Stein. “I didn’t even have to sit still,” I said. “Zina said movement was good.” Kathleen and George oohed and ahhed, and Kathleen said, “It’s a gift to be able to look at a person for that long. We don’t get to look at people, really look, very often.” I can’t quit thinking about Kathleen’s comment. Who do we get to look at, really look at — lovers, pets, children. If we don’t keep our curiosity under control, people give us looks for staring. Riding Muni, I sometimes want to drink in fellow commuters, the way even the most self-contained can wear their vulnerability on their sleeves. I watch a young woman who has a face too mature for her age; she’s one of those people who never looked like a child. I imagine her in a grade school group photo, the miniature adult amidst a bevy of children. She’s attractive, sitting on the edge of her seat talking with two guys in their 20s, cute hip guys I skim over. I remember approaching this guy on Van Ness — this was several years ago — and he locked eyes with me, his gaze so penetrating it was impossible to break. It was like a horror film, the sky darkening and the guy’s eyes glowing like uranium. He didn’t say a word to me, but as I scurried past him, my heart was wildly pounding. 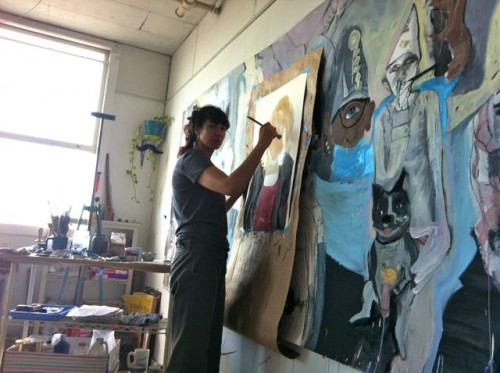 To look, to really look at somebody — my portrait is part of a series Zina is doing of writers. Others she’s completed thus far are Kevin Killian, Cooley Windsor, James Bradley, and Mark Van Proyen. When the portraits are shown, a video of the writer reading his or her work will be projected over each portrait. Zina purposely is keeping the painted mouths a little vague so the projected mouths will show up more clearly. Painting a portrait from life is the narration of a relationship. As I sat cross-legged on her couch, I stared at Zina as much as she stared at me. I saw a tall, stunning dark-haired woman, who was bold and impulsive. I found her charming and confrontational, and a bit scary. She told me her life story as she painted me, occasionally complaining how talking about herself was distracting her from the portrait, like it was my fault she was pouring herself out to me when the process was supposed to be about her taking me in. Much of what she told me — even though we only knew one another from art opening chitchat — I wouldn’t dare to repeat in print, it was that intimate or scandalous — the only realm of interaction I feel truly comfortable in. I may be bad at dinner party repartee, but I’m the type of person to whom straight guys will confess the blowjobs they’ve gotten from other guys — so Zina and I shared that no bullshit here we are, we really are attitude. 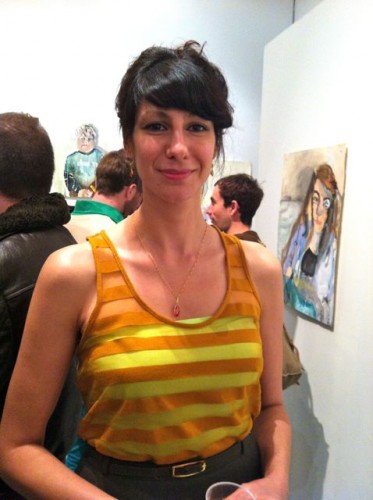 Zina at the February 25 opening of her first solo show, at Adobe Books.

Zina said that sometimes it takes a lot of nerve to confront the material we were dealt with in life. She was born in Iraq in 1978. When she was five, she and her mother snuck out of the country, fleeing the Ba-ath Party. “Saddam was killing off each of my family members one by one.” In the States, Zina’s family moved a lot; her parents, both geophysicists, held various academic and research positions in the Midwest and the South. In 2006 Zina relocated to San Francisco, eventually enrolling at CCA, where she met her husband, Justin Carl Hurty, and earned her MFA in painting and drawing in 2009. Zina’s relationship to body and the figure is in response to an intimate relationship to mortality. When she was 15 her 5-year-old brother died of leukemia. He was ill for two years. Zina described in detail his slow, horrific decline. And then there’s her relations in Iraq who were killed or who witnessed other deaths. At a recent family gathering an uncle told of helping an old couple who were caught in a bomb pick up their blown-off fingers. Zina said that once you encounter mortality, it changes your art, for you see the body as meat. Repeatedly she referred to the “meatiness” of the body. In the future she plans to push her art towards more directly addressing the politics of mortality. 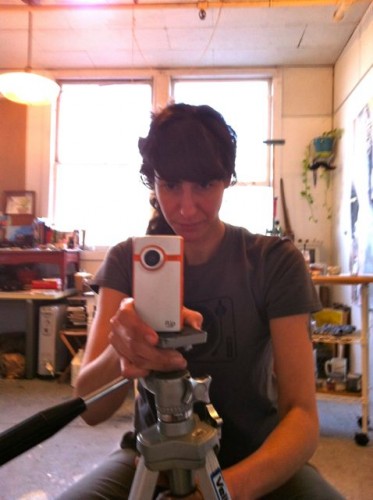 Zina videoing me reading my work.

A week later I returned to Zina’s studio, again driving past dilapidated warehouses, chain link fences, and a metal scrap yard to the gravel parking lot behind her building. Zina had been intending to fill in background details, but when I arrived she said to do so would have meant getting rid of the drips that fell onto my shoulders and face. She said she couldn’t bear to lose the drips, that to change anything would be risking adding “untrue elements” to the painting. Throughout the process she was very much concerned with telling the truth in my portrait. During our first meeting I was more reticent than Zina, a bit stiff, due to feeling overwhelmed and burnt out from other commitments, and that’s reflected in the portrait. Zina said she showed my portrait to a friend who said I looked very intense and contained. I’m convinced that if she painted me on my second visit, when we were drinking Malbec and shooting the shit, the portrait would have a totally different energy, more relaxed, open. Digging through portraits of Zina’s friends that were stacked on the floor, I noticed how many of their bodies bled into the background. I wonder if she’d painted me that second visit, if my openness to her would have resulted in a meatiness that burst the confines of its outlines, excitedly reaching out.