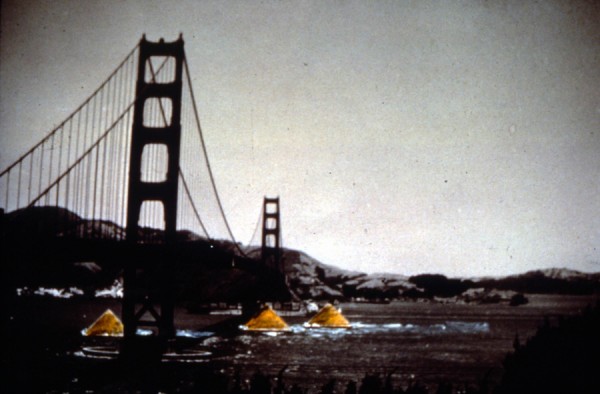 Anniversaries serve not only as occasions for community celebration, but as a good excuse to show or commission artists. Take the America 1976 exhibition tour organized by the Department of Interior for the U.S. bicentennial. As SFMOMA was the seventh venue for this predominantly landscape painting show, I imagine it threatened to be a rather boring curatorial prospect. Curators Suzanne Foley and Rolando Castellón each smartly used it, though, as an occasion to produce offsite installations and outdoor events by a handful of Bay Area artists who were working in the environment and largely hadn’t been shown by the museum before. Suzanne Hellmuth and Jock Reynolds’s nonfunctional extensions to the existing exercise parcourse directly related to framing the view of the Bridge and inserting one’s body within it. The SFMOMA series remains an important precedent for our offsite commissions.

In the images below of various performance interventions and sponsored installations, the bridge plays more of a supporting than a starring role, to current and former Bay Area artists: Suzanne Hellmuth and Jock Reynolds, Vince Grippi and Peter Richards, Richard Kamler, Peter d’Agostino, Jill Scott, and Bonnie Ora Sherk. 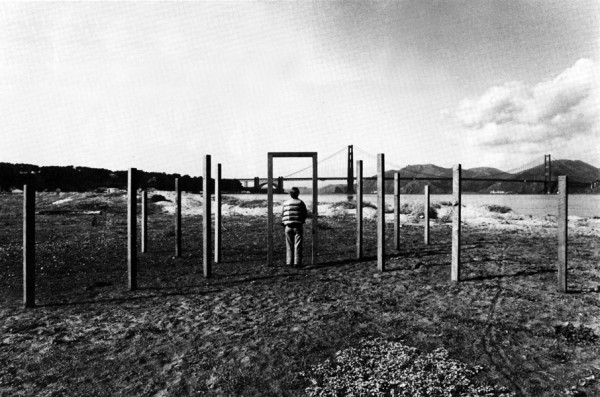 “The work was sited along the Golden Gate Promenade located in the Golden Gate Recreation Area near the Coast Guard Station at the Golden Gate Bridge. It’s popular with strollers, joggers, and photographers. Already built into this landscape was a fitness parcourse with structures labeled for particular exercises (vaulting, chin-ups, etc.) with intervals for jogging between exercise stations. We built three more stations extending west from the furthest official station. These Three Over Par structures were built of the same redwood beam materials as the fitness stations; however, offered no instructions for use.” 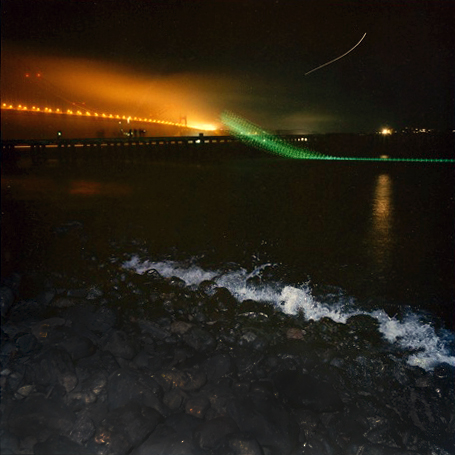 “We completed a series of experimental light sculptures in the late ’70s that engaged the intersection between water and air. Our interest lay in the relationship between the dynamics of these two liquid forms. Tides, currents, and waves on one side and the movement of the winds and their invisible turbulence on the other. Using chemi-luminescent lights, floating on the surface of the water and/or held aloft by helium balloons, these beacons acted as movement tracers whose personalities reflected the conditions of the night.

The work at Fort Point was designed to respond to an eddy formed by the flow of the incoming tide. We had discovered that at this site, the water actually flowed out through the Golden Gate when the tide was rising and water was coming into the Bay. We used this phenomenon to create a work that was flowing with the water and wind at the beginning of the cycle and then spun around 180 degrees when the eddy formed.” 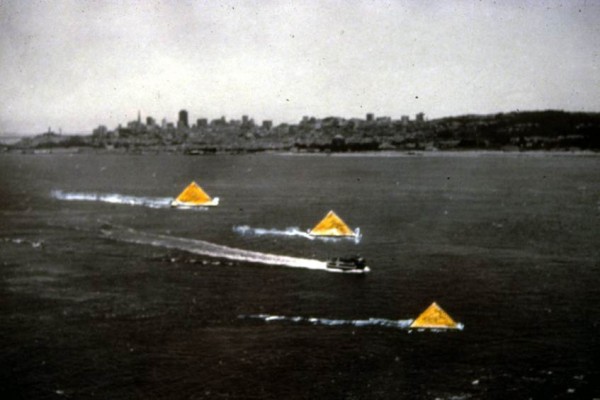 “The pyramid seems appropriate for a number of reasons: 1) the communal aspect involved with their construction (I have long felt that it is within the context of a shared task that a community is formed); 2) it is a symbol of solidity and aspiration that crosses cultural boundaries; 3) the clarity and simplicity of its shape allows all people to relate to it equally; 4) it is a welcoming image for the King Tut exhibit currently touring the U.S. and scheduled for San Francisco next year.” 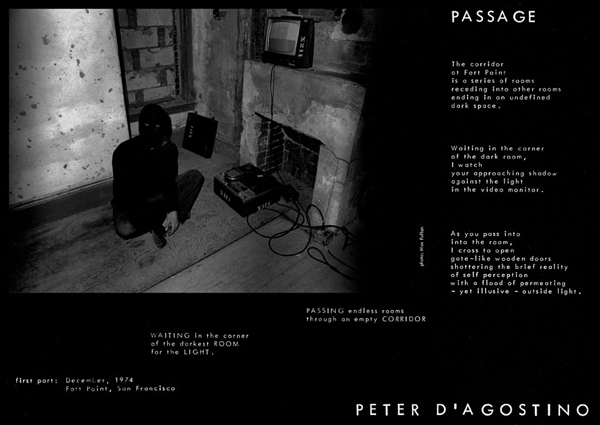 “The PASSAGES video performance/installations at Fort Point (Dec 1974 and Nov 1975) were composed of live and recorded images and sounds juxtaposing my walks with those of the participants walking through the fort. Video monitors located throughout the corridors temporarily lit the darkened spaces with images of the surrounding landscape and sounds of the ocean hitting the breakers under the Golden Gate Bridge.” 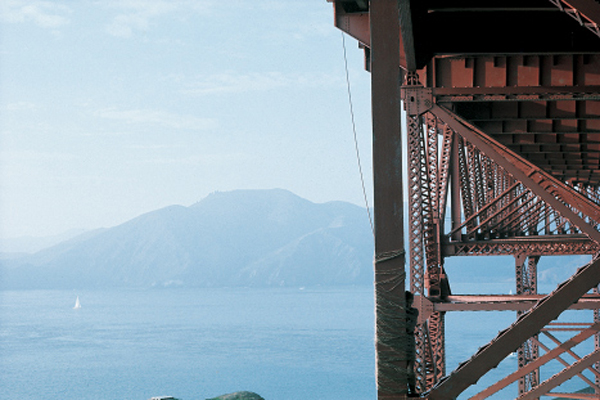 “I climbed up the steel pylons of the Golden Gate Bridge with a male assistant. As climbing the bridge is illegal we had to be careful we were not seen. The assistant then tied me to one of the girders and descended. At sunset, four security guards from the headquarters arrived on top of the bridge as someone had reported seeing a figure tied there. With a megaphone they yelled: “Come down or you will be arrested for attempted suicide.” The assistant them climbed up and cut me out of the string with a knife. It took us two hours to convince the officials that this action was ‘only’ an artwork.” 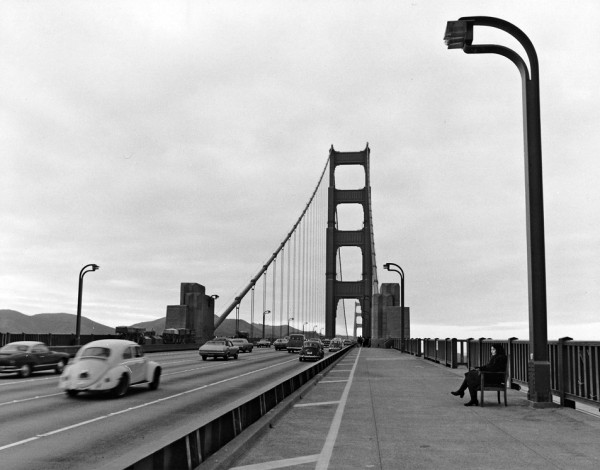 “After Sitting Still I in the water I took the idea of the seated human figure to different city environments. I brought a chair with me to street corners in different neighborhoods, including the Golden Gate Bridge, and the Bank of America Plaza, and also to different cages at the zoo. At that time I was feeling very much like an object on view, and the pieces were about female isolation and loneliness and were very personal expressions, although they didn’t necessarily appear to be that way. On an obvious level I was exploring how a seated human figure can transform an environment.”