On Sculpture That Embodies: Phyllida Barlow at the New Museum 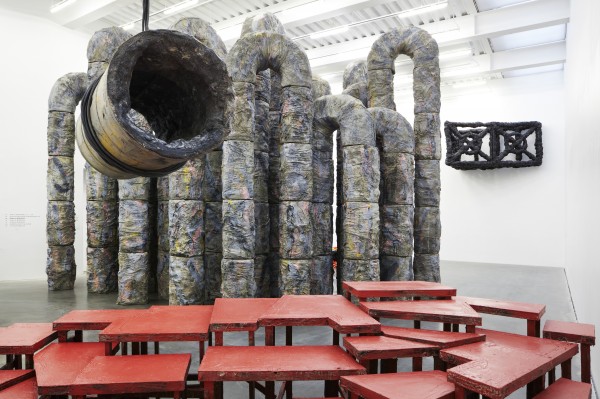 On a dull, wet day a few weeks back I wandered into the New Museum on New York’s Bowery. It was a pleasant surprise to see the sign for Siege, a new show by the British sculptor Phyllida Barlow, whose work I had first encountered at the Serpentine Gallery in London some years earlier. Returning to works of art that you love is much like opening the pages of a cherished book, in which a single sentence can evoke the atmosphere and memory of the whole. 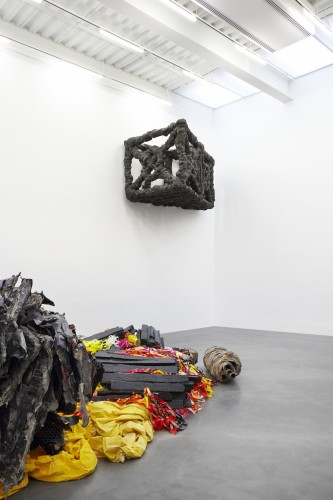 Barlow constructs massive sculptural forms from crude industrial and synthetic materials. The hurried process with which she is known to build these giant structures is evidenced in their rough, bold appearance. They are gloppy and unfinished-looking, ugly and luridly colored; in Siege there are toxic pinks and yellows, and oil-slick blacks. But the scale and rough-hewn form of these pieces, and the variety of different shapes and spaces created in and around them, gives them an absorbing physicality, creating a sort of industrial obstacle course. If the gallery attendants weren’t lurking close by, I’d be tempted to clamber over the red wooden slats, rummage through heaps of brightly colored streamers or squeeze myself into the narrow passages within the maze of towering arches comprised of grayish building blocks that populate the center of the gallery.

I think it may be the infant in me that finds most interest in those sculptures I want to do things to. (One day I will tell you about the things I’d like to do to Erwin Wurm’s and Lara Favaretto’s sculptures.) This urge is interesting in light of James Meyer’s 2004 critique of Olafur Eliasson’s 2003 Weather Project installed in the Turbine Hall of London’s Tate Modern, in which, noting the increasing proliferation of installations vast in scale, he accuses Eliasson’s spectacle of overwhelming viewers to the point of disembodying them. Advocating for a more human dimension he writes, “Barnett Newman described the encounter between the beholder and the work as a phenomenological relation: the painting should cause the viewer to feel present. (‘Not there — here,’ he quipped.)”

So, too, with sculpture, one might argue (and many have); although rarely keeping to a somatic scale, Barlow’s work does indeed evoke the body. By virtue of the sculptor’s somewhat visible process, the weight of her forms and the invitation they extend to explore their edges and contours, viewers may find themselves feeling intensely aware of their bodies in relation to the gallery space and to Barlow’s sculptural forms.

Writers describing Barlow’s work refer to its precarious composition — piles of industrial detritus rise up to the ceiling with parts teetering vertiginously on top. In Siege, an enormous piece of concrete tubing hangs from rubber cables wound around its middle, while a triangular, black, cage-like structure that looks as though it has been dunked in tar is suspended from a wall. But the anxiety this instability induces — and the aggression implied by the exhibition title — is offset by the compositional balance the works establish as a whole. One has the sense that each form might lose some of its force, and topple, if viewed separately from the others. There is levity, too, in Barlow’s heaps of squashed, cement-soaked boxes — intractable-looking forms that have nonetheless been acted upon and compressed. 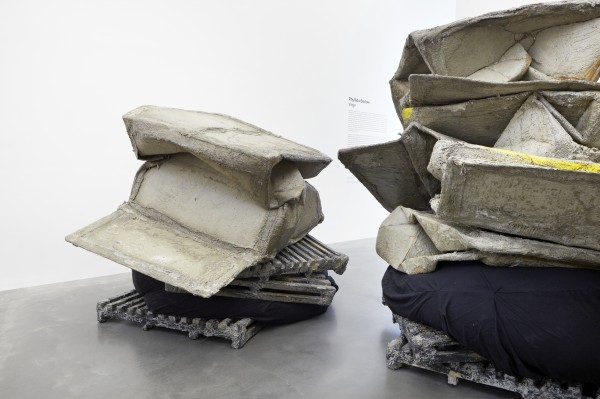 Though these sculptures are by no means welcoming — in fact, they look deeply hostile — there is nonetheless something very human in their mass and presence, the result of some transference from maker to object that gives them a magnetic quality. Their presence is cumulative, so that, collectively, the forms hum with life — an impression that left me feeling paradoxically calm and restored. Turning out onto Bowery, the streets were still wet, but not quite so dull.