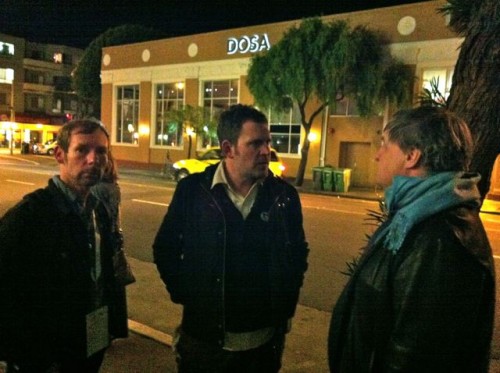 This week Off Label, the second feature-length documentary of former homeboys Donal Mosher and Michael Palmieri, had its West Coast premiere at the San Francisco International Film Festival. The film’s title refers to the legal practice of prescribing pharmaceuticals for a use not approved by the FDA, such as prescribing antidepressants that cause drowsiness for insomnia. Off Label tracks eight individuals as they move through medicalized America — a young medic who was stationed at Abu Ghraib, a woman whose son experienced a psychotic break and committed a violent suicide in an antidepressant marketing study, a bipolar woman who takes eighteen different prescription drugs a day, a man irremediably damaged by experiments conducted on him in prison, a medical anthropologist, and a variety of individuals who make their livings as human guinea pigs in drug test trials.

I’ve known Mosher and Palmieri forever, so nothing written here is “objective.” When they moved from San Francisco to Portland in 2007, it was a big loss for me. But they return to the Bay Area often, and during the four years making Off Label, their trips were usually in conjunction with interviews they were conducting in Santa Cruz. At parties, openings, over dinner they told me heart-wrenching, gruesome stories. At that point, the material was so fresh, they were pulsing with it, still in shock. Editing and shaping brings distance, but this was way before that stage. Wednesday night as I drove over to the Kabuki Theater, I was filled with trepidation. I don’t want to look at this, I thought. How are they going to make such material bearable, I thought.

I needn’t have worried. Not only is Off Label bearable, it’s a sensitive, poetic portrayal whose very existence sheds hope onto a pretty hopeless situation. The cinematography is gorgeous, punctuated with languorous shots of nature and of urban minutiae. For what seems like minutes, the camera seems to forget the interviewees as it drinks in the landscapes and interiors that frame them. The care and affection Mosher and Palmieri have for their subjects is evident in every scene. The subjects give themselves over to the camera with the uncomplicated trust of a child or lover. And the camera never betrays them. We see poor people, homeless people, damaged people, but they all look good, without being glamorized. People who are not beautiful in ordinary life look beautiful in this film. And that’s not just about lighting and camera angles; it’s about attention. The camera keeps returning to the corroded fingernails of the victim of prison experiments. At one point the nails fill the entire screen, as if the filmmakers were saying, in case you missed this before, look, really look, and the nails do look terrible, all painful and swollen, but the camera spends so much time on them, they eventually turn sculptural, as if we were being invited to accept, not reject, this part of this man’s being. Even the stills of carnage in Iraq, in the context of the rest of the film, have a cruel beauty. The camera lingers with an almost tender curiosity on exploded body parts. Moving into intimate spaces, the film never feels voyeuristic, but generous. The willingness to see is a form of love. All of us long for such a compassionate eye. But few of us ever find it. 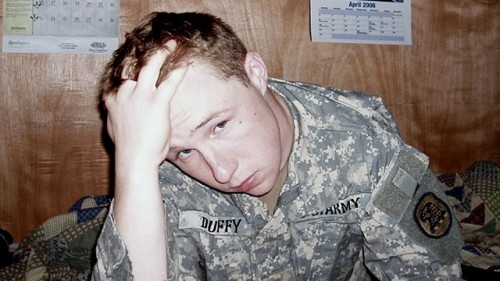 During the Q&A Mosher and Palmieri introduced Andrew Duffy, the medic stationed in Abu Ghraib, once an Iowa farmboy, now a veterans’ activist who attends college in San Diego. A pair of redheaded young women behind me said, “Isn’t he adorable with his little glasses.” He looks younger than his 26 years.  At one point in the film, to demonstrate the torturous effect of the huge 14 gauge needles that Duffy was ordered to use on people, such a needle is jabbed into the vein of an unidentified arm, and the camera focuses on the arm’s flinching muscles and the ensuing blood that floods out from the needle’s insertion point. I remembered a still of that scene from Donal’s blog. It was his own arm. Here’s how he described it:

Andy holds my arm down and places the 14-gauge needle against the vein. He explains in a clinical voice that this large sized needle was used to inflict extra pain [on] prisoners at Abu Ghraib — whether administering insulin to diabetics or water to those who were on hunger strike, the idea was to break resistance even during treatment. To show this on film, I’ve volunteered my arm. The needle slides in, feeling like a leather worker’s awl in my vein. It’s painful, yes, but I’m relaxed. Andy says, “The prisoners would be fighting, tensed all up, clenched — not understanding what you were saying — imagine how this would feel then.” He removes the needle and lifts my arm over my head. With our faces close, I ask him how he feels doing this. He joined the national guard all gung-ho, but became a medic hoping he could be in the war and do no harm. He says, “A lot of bad memories are happening right now, there is no good reason to use a needle like this on anyone.” 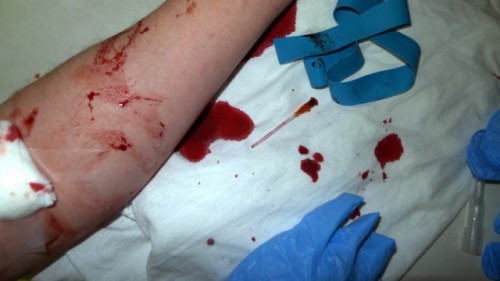 During the Q&A Donal said that America is a lonely place, that the film was about forces that isolate people. If we need a cure for anything, he said, we need a cure for American loneliness. This loneliness was poignant as some of the audience attempted to turn the Q&A session into group therapy. “I’m on all these medications,” said one woman, “and I don’t know how to get off of them. What do you suggest I do?” I left the theater overcome with sadness that humanity has come to this, that there are so many broken people, people taken advantage of, people destroyed by virulent capitalist systems, and for so many there is no safety net. But I also felt I’d taken part in a testament, that watching the film with this room full of strangers and friends was a form of community embrace. 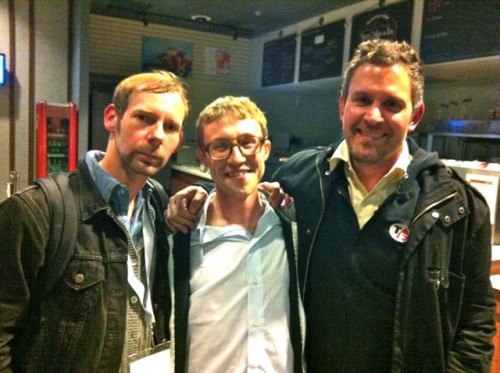