In Protest at Berkeley Art Museum

For one night only, on Wednesday, May 9, the Berkeley Art Museum presented In Protest, a collection of protest posters commissioned by a variety of artists and writers, including Zarouhie Abdalian, John Baldessari, Amy Balkin, Amy Franceschini, Doug Hall, Paul Kos, Tony Labat, Shaun O’Dell, Rigo 23, Piero Golia, Jordan Kantor, Kevin Killian, Martha Rosler, Allan Sekula, Mungo Thomson, Natasha Wheat, Charlie Dubbe, and me. The show was curated by Joseph del Pesco and Connie Lewallen. One hundred copies of each poster were printed in Oakland by Horwinski Letterpress, a firm that has printed protest and union posters for decades. Half of these were stacked on the floor of the lower gallery at BAM, where visitors could pick their favorite — or one of each — and take them home with them, like one of those Felix Gonzales Torres shows people just love. The other half will be distributed to local activists for use in upcoming protests and events.

Here’s Charlie Dubbe standing next to his poster. I believe that’s Open Space’s Suzanne Stein in the background. The “Enough” poster, one of my favorites, is by Paul Kos. 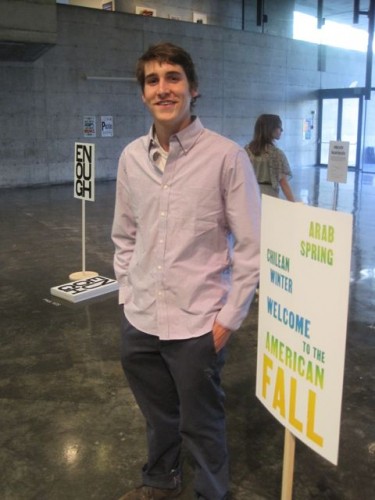 In the background is Kevin Killian’s poster, comprised of quotes by poet Jack Spicer, with Jordan Kantor’s poster in the foreground. 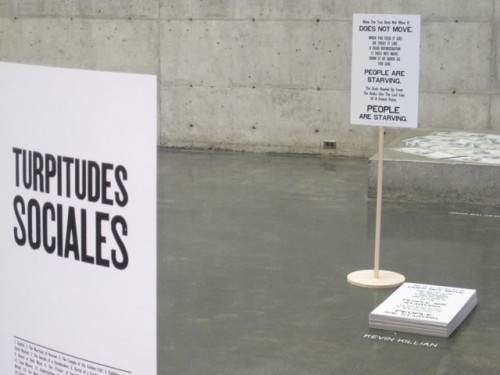 Here’s Rigo 23’s poster, with a few others in the background. 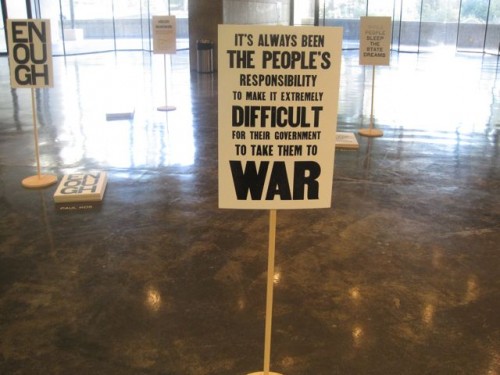 And here’s someone taking a photo of the poster I wrote. 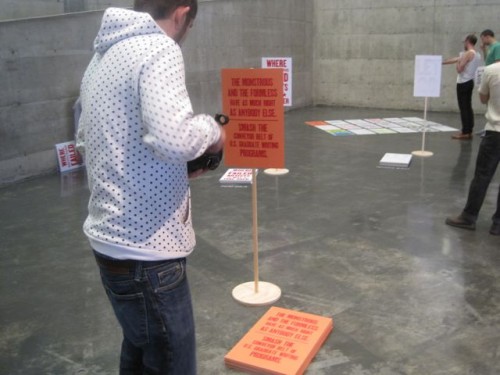 My poster reads: “The monstrous and formless have as much right as anybody else. Smash the conveyor belt of U.S. graduate writing programs.” The top half is a quote from my novel The Letters of Mina Harker. The bottom half is me acting out. When I finished it I felt rather silly. All the terrible things in the world that deserve to be protested against, and this is all I could come up with? When confronted with the task of writing a protest poster, I felt inadequate. I felt like I had to be pithy and artless and forceful. I really wanted to come up with something angry, like something the civilians would shout on the Odessa Steps in Eisenstein’s Battleship Potemkin. The intimidating brevity of the protest poster form reminded me of something I heard in the mid-’80s when Kevin (Killian) and I were visiting some friends of his from graduate school who were living in Los Angeles. His one friend, Gail, after getting her Ph.D. in English, went into advertising, and wrote the then popular slogan, “Use your noodle,” for an ad for Top Ramen noodle soup. Gail said that in her advertising agency, writers were looked at with suspicion if they wrote more than one line a day. I’ve always wondered, what if your one line came early in the morning, do you sit around and pretend you’re straining for inspiration the rest of the day?

As I look at the run of posters spread out in my living room now, I realize that there’s no one right way to make a protest poster. There’s room for anger, there’s room for humor, there’s room for pathos. Maybe there’s even a space for the monstrous and the formless after all. In the last analysis, I’m glad not only to be included among these amazing artists and writers, but I’m also glad I did what I did.