Diary of a Crazy Artist: Facebook and Bible Prophecy 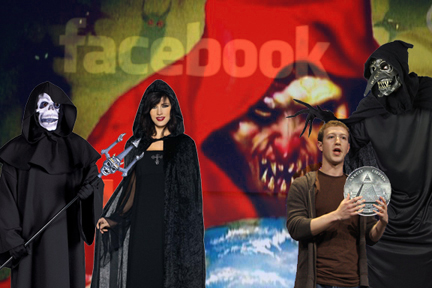 If you have ever read the Bible you figure out pretty quickly that if you want to get anywhere in life you pretty much have to devote yourself to either God or the Devil. For example, Robert Johnson became a famous guitar legend by making a deal with the Devil at a lonely crossroads in Mississippi. Faust sold his soul to Mephistopheles for the love of a woman, and so on.

So what people should be asking now is what deal did Mark Zuckerberg make to go from being some nerd in a Harvard dorm to one of the richest and most powerful men on Earth in just a few short years? If the Bible is any guide, a bargain had to have been struck somewhere along the road, and it’s starting to look like it wasn’t with God. There just doesn’t seem to be any other explanation.

This morning I was watching all the fuss over the Facebook IPO on TV (the biggest in tech history) thinking how artists toil and labor all their lives and even the richest and most famous among them never become worth 20 billion dollars. Not Sol LeWitt, not Jeff Koons, not Julian Schnabel, not Andy Warhol or even Picasso. And while we’re at it, not Earnest Hemingway, not Stephen King, not David Milch, not even the wealthiest Oscar winner of all time, Steven Spielberg, whose net worth, after a lifetime of making blockbuster films, is estimated to be a mere $3 billion. Even Larry Page, cofounder and CEO of Google, is only worth $18.7 billion — but note that Page is 10 years older than Zuckerberg, so imagine where Zuckerberg will be in 10 years! 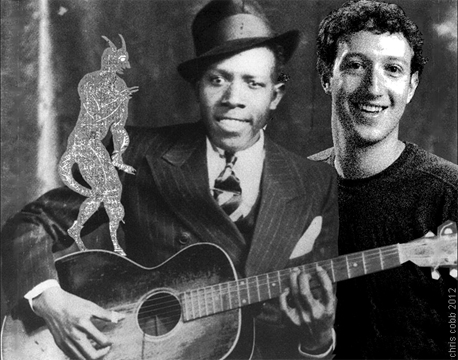 King of the Blues Robert Johnson and Mark Zuckerberg

I brought up Larry Page on purpose because at least Google has “Don’t be evil” as part of their mission statement. Facebook has no such thing and frequently changes its cryptic privacy rules so nobody ever knows what is shared, what is public, and what is deleted. So if Facebook is not restricted by such moralistic concerns, what is it that guides Facebook as a company? A sense of destiny?

In the last year alone Facebook has helped to enable the revolutions in Tunisia, Egypt, Yemen, Libya, and Syria. It’s even been central to organizing Occupy Wall Street. So while on the surface this may appear to be a good and moral thing — allowing people to communicate openly — it has been quietly making a killing selling ads and user information at a huge profit.

Then I stood on the sand of the sea. And I saw a beast [Satan’s Antichrist, could be Facebook] rising up out of the sea, having seven heads and ten horns, and on his horns ten crowns, [The book of Daniel explains these represent 10 nations he will rule, but it can also mean have influence over] and on his heads a blasphemous name … The dragon (Satan) gave him his power, his throne, and great authority.

And he causeth all, both small and great, rich and poor, free and bond, to receive a mark in their right hand, or in their foreheads: And that no man might buy or sell, save he that had the mark, or the name of the beast, or the number of his name. Here is wisdom. Let him that hath understanding count the number of the beast: for it is the number of a man; and his number is Six hundred threescore and six.

In fact, the very way Facebook collects data and watches every move their users make and the way it attaches itself to cell phones, websites, and products you purchase online, it’s all designed to be like a virus you can’t get rid of. Is that evil?

So, is it possible the Facebook icon will be the mark of the beast? It’s now integrated into practically every website and smart phone. Now that the company is public it will need to increase revenue each quarter. So if, like Google, they already collect your data, sell it to the highest bidder, and treat users like sheep to be advertised to, what’s the next logical step? Their own cell phones? Handheld devices you need to use if you want to buy things? Could that be what “mark on the hand” means? Maybe Facebook could launch its own data-collecting phones and dominate the digital wallet business, adding all your financial data to your Facebook page. All your friends could see what you just bought or sold, no matter where you are. Would that be considered evil?

Some users apparently think so because they are now filing a class action lawsuit, charging that “Facebook has been improperly tracking the Internet use of its members even after they logged out of their accounts … Thilo Weichert, the data protection commissioner for the northern German state of Schleswig-Holstein, was quoted in the German daily newspaper Frankfurter Allgemeine Zeitung warning shareholders to be aware that if European privacy authorities have their way, ‘Facebook’s business model will implode.’ ”

While it’s true Facebook is essentially a data-mining company and seems to have no clear moral compass, it has been good to at least one artist. A few years ago David Choe painted murals in their first Silicon Valley office and got paid in stock options. He is now worth between $200 and $500 million dollars. I am not sure where he fits into Bible prophecy (David and Goliath?), but he must be in there somewhere. You can hear his not-so-biblical story here on the Howard Stern show. Who knows, maybe he will be an angel and spread some of that dough around in the Bay Area art scene?