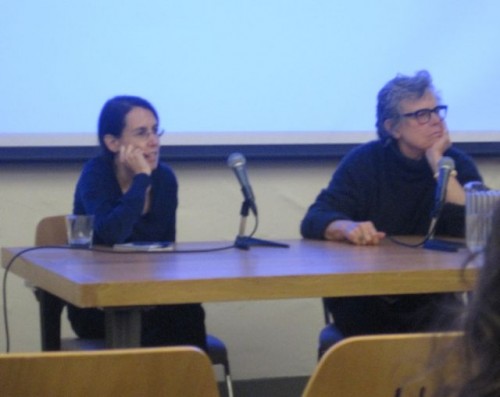 On March 5th I attended the artist talks/conversation between Catherine Lord and Moyra Davey at UC Berkeley as part of the “Still Pictures” lecture series on photography, curated by Anne Walsh. I came to the event an admirer of Catherine Lord — I love her cancer memoir The Summer of Her Baldness, and a couple of years ago I managed to have one dinner with her and mutual friends in Los Angeles (bibimbap in Koreatown, followed by ice cream in Silver Lake).  This wasn’t long after she won the 2010 Harvard Arts Medal, and a good part of our dinner banter consisted of increasingly ludicrous fantasies of how to display the giant medal — doorstop, etc. Moyra Davey was vaguer to me, though a few days before the Berkeley event I happened to see some of Davey’s Copperheads (1990) at the Chicago Art Institute.  Copperheads is a series of tightly cropped photographs of distressed pennies Davey found on the streets of New York. (SFMOMA also owns a couple of these, but they’re not currently on display.)

The Lord/Davey conversation was called “Two Serious Ladies,” after Jane Bowles’s 1943 novel, but as I remember the evening, the literary “lady” who keeps arising for me is Charlotte Brontë. I just finished Brontë’s humongous novel Villette — it took me a couple of months, only picking it up at night before falling asleep — and the book has so infused my subconscious, I’m reading the entire world through it. The gossip in me is obsessed with Brontë’s unrequited love for Constantin Héger, the inspiration for Villette’s Paul Emanuel, heroine Lucy Stowe’s strange and mostly unlikeable love interest. Since Héger was married and didn’t reciprocate Brontë’s abject longings, her love for him was hidden, even from those closest to her. Brontë was Héger’s student (and eventually a teacher) at the boarding school in Brussels he ran with his wife. Evidence of Brontë’s passion are four unanswered letters she wrote to Héger after she left the pensionnat. Brontë’s letters beg for responses that never arrive: “[W]hen the sweet and dear consolation of seeing your handwriting, of reading your counsels, fades from me like a vain vision,—then fever attacks me, appetite and sleep fail: I feel that life wastes away.” In the digital age it’s easy to forget the impact of a letter’s materiality. Here, the professor’s handwriting is embraced as a sort of body, the only physical embodiment available to Brontë. We know that Héger received the letters because at the edge of one of them he made some notes in pencil, including the name and address of a local shoemaker.

The crassness of Brontë’s weird, troll-like professor turning her passionate letter into a scratch pad astonishes me. A few years ago, when Eileen Myles was thinking about the differences between digital and analog, she excitedly said to me that analog generated heat. Even though there’s a coolness to Lord and Davey, both in their personal manners and their approach to art, their work is fueled by analog-generated heat, resulting in a humanness that at its best is totally arresting. Both engage with endangered technologies, both are totally professional yet subvert slick professionalism, both create work into which others have read unintended narratives, both are passionate about writing and books, and in their conversation at Berkeley both managed to reinvest meaning into the buzzword “archive.”

Catherine Lord: “I seek stories that can’t find a route to the surface of the archive, stories hidden in plain sight, stories drawn between the lines. I photograph ink on paper. I photograph, with care, statements that cause something to be true by the act of making the statement.” 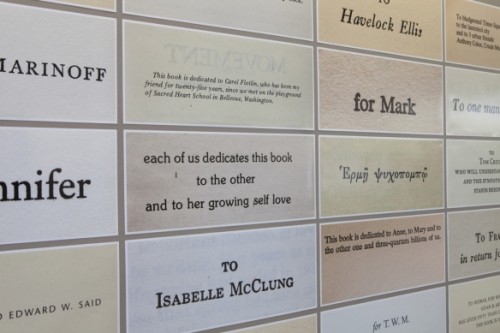 Catherine Lord, To Whom It May Concern, 2011

Lord’s slide lecture consisted of a series of photographs of book dedications from To Whom It May Concern, a site-specific installation she did for the ONE National Gay & Lesbian Archive in Los Angeles, which will be up through the end of May. Lord and her assistants photographed several hundred book dedications, blew them up big, and arranged them in a grid above the library’s stacks. Catherine Lord: “These dedications can be retrieved only by touching a dying medium. Dedications are at once intimate and irrevocably public.” In other words, book dedications are a queer form, resplendent with coded and secretive desires. To my dear “friend,” Mary. Rather than showing a slide and speaking over it, Lord tended to show a slide, then plunge us into darkness while she talked, then show another slide, then darkness — a rhythm that made the words we were hearing seem very slide-like, so that eventually the talk became synaesthetic, an alternating strobe of visual then aural slides. The notes I was taking on Lord’s lecture were frustrated by my continual plunge into darkness. Goodbye, left brain linearity. At one point in the evening, Lord said, “I squirm at the accusation of scholarship,” and I thought no kidding.  Everything about her bespoke an intelligence founded on an intense engagement with the world that fucked with austere headiness. 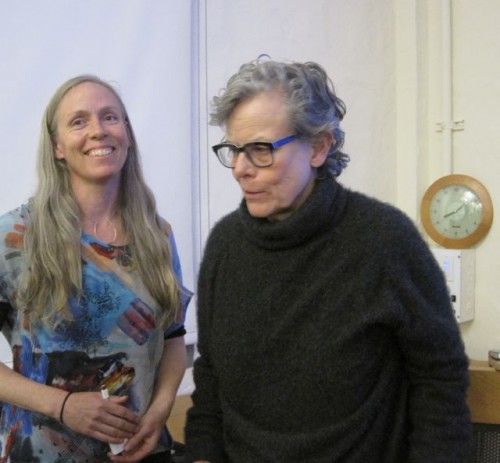 Here are the notes I scrawled in the darkness (with no claims to accuracy): Project on book dedications. Love of paper. Believe paper is gay. Bookish. Hide private in plain view. Mechanical reproduction, said again and again.  Distrust of form and content, especially their juncture. Recipient forever bound to giver, whether she wishes the gift or not. I squirm at the accusation of scholarship. By holding someone else’s property she absorbs the erotic charge. You buy a book, but don’t own it. Like gossip, dedications suggest the points are always connected. Dedication invents its audience. Queer celebrates poverty of theory. Make own stories out of gaps and silence.

Moyra Davey left the lights on as she gave an overview of her career. The work that I’ve thought about repeatedly this past month are her folded photographs. Subverting the elaborate crating and insuring of conventional art shipping, Davey, who still shoots on film, folds each print into a postcard-size bundle, photo facing outward, and tapes the edges. She hand-addresses it, affixes a stamp, and sends it through the mail. At the gallery the photo is unfolded and displayed with others in a grid pattern, bits of tape, stamps, and Moyra’s handwriting melded to the images. Davey originally developed the procedure because she couldn’t afford to frame and ship the photos to an upcoming exhibit, so she folded and mailed them to Toronto gallerist John Goodwin. She continued this process with her New York gallery, Murray Guy. Davey showed us slides of ordinary objects, such as a cup and saucer in a cafe, the folds creating a 3-dimensionality forefronting the photo as an object in and of itself, and not just an image-bearing medium. Davey said that working in the genre of the folded photograph, she doesn’t have to take on the grand subject, but can focus on the intimate. One time when crawling around the floor with her child, she photographed the dust under her bed.  Davey described herself as working from a bookish position, which she described as existing alongside of life, rather than being imbedded in it. Referencing Louis Malle, she said that behind the camera she is on the other side of the real of what’s happening. 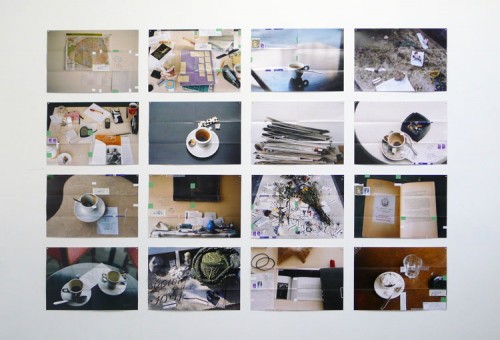 Davey’s folded photos arrive scarred, but the fact that they arrive at all is a testament to both the precariousness and resistance of nostalgia. Their weathered tenderness invites us to contemplate the ever uncomfortable reverberations between mortality and love. I sense a high romanticism behind Davey’s photos of ordinary objects that would make Charlotte Brontë sit up and take notice. From Villette: He had strength to fold me in his arms; he had power to speak my name … violets smothering a closely folded bit of pink paper … he tasted the sweet breath of dusk, and noted the folded bloom of the garden … all my life long I carried it folded in the hollow of my hand yet, released from that hold and constriction, I know not but its innate capacity for expanse might have magnified it into a tabernacle for a host … and in the midst, folded round and round in cobwebs … not till the destroying angel of tempest had achieved his perfect work, would he fold the wings whose waft was thunder … how I envied her those folds of grave, dark majesty! 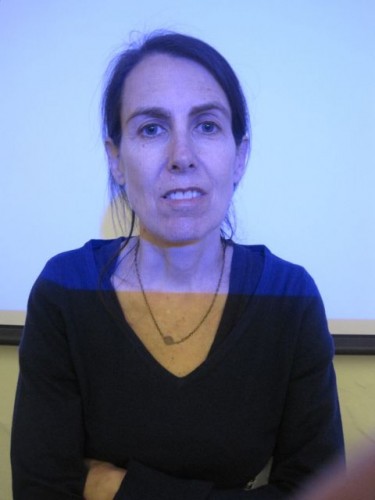 How I envy Catherine Lord and Moyra Davey their art careers.  Sometimes I feel like an artist trapped in a writer’s body, that my literary concerns make more sense in an art context than a writing context. I imagine myself up in front of that Berkeley lecture hall with Lord and Davey, giving my own slide lecture in which I explicate my latest sprawling conceptual piece about shoe repair and unrequited love. With the tap of my finger I plunge the audience into darkness then light then darkness. “Love trumps rationality,” I declare with aplomb.