Diary of a Crazy Artist: Is Ross Mirkarimi Really the Batman? 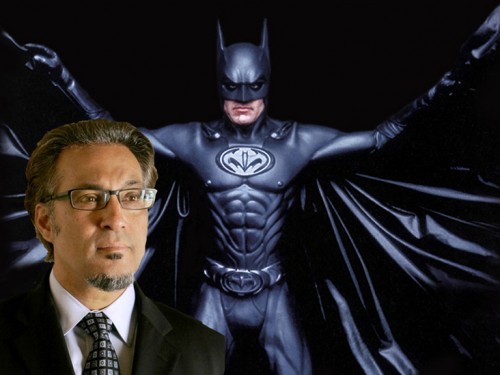 OK, I can’t resist: when did Ross Mirkarimi stop beating his wife?

Or did he beat his wife? Or is she an abuse victim too afraid to come forward, heroically rescued by her neighbor?

I mean, it’s not every day that the writer of a female superhero comic book called Huntress just happens to be the neighbor of the newly elected sheriff of San Francisco. And it’s a weird coincidence that her caped, crime-fighting character just happens to be a female vigilante who is fighting against the Batman for control of Gotham City.

It’s a narrative that practically writes itself.

Forget for a moment that Mirkarimi was poised to become perhaps the most progressive sheriff in the country, replacing liberal icon Michael Hennessey. I mean, who cares, right? Law-and-order cops never liked that nice-guy-sheriff stuff anyway. While the rest of the country is busy banning books in Arizona and destroying unions in Wisconsin, Michigan, and elsewhere, San Francisco is falling all over itself trying to dethrone its sheriff for, uh, for beating his wife? Or is it for potentially beating his wife? Or is it for, as the mayor, Ed Lee, put it, “official misconduct,” which actually occurred before he was sworn in as sheriff?

Ivory Madison, author of Huntress: Year One and neighbor of Sheriff Ross Mirkarimi

And forget that Mirkarimi; his wife, Eliana Lopez; and Lopez’s friend Myrna Melgar have all publicly stated the comic book author/neighbor has breathed life into a narrative that doesn’t exist in the real world. They all say that Mirkarimi didn’t beat Lopez at all. In fact, they say it’s just the opposite — that the now-famous arm bruise was inflicted when he grabbed her arm in the middle of an argument and was an isolated incident that happened in a car and then got blown way out of proportion.

Sure, it’s one thing if they were alone, but they aren’t — a growing chorus of people, including KGO radio host Christine Craft and the Chronicle‘s Deborah Saunders, have also started questioning the veracity of the charges against Mirkarimi and the gleeful feeding frenzy that’s been taking place in the media.

To the casual observer it seems realistic that that the good-guy sheriff, who just won his election in a landslide, has been caught being bad and should now be punished. And we are so ready to believe it, too, because as a culture we have lost faith in authority figures. Richard Nixon. Ted Haggard. Ed Jew. John Edwards.

But even if you believe Mirkarimi was just one more bruise away from killing his wife, as the Chronicle‘s precrime law enforcement advocate C. W. Nevius implied — Bruises often lead to battering, and too often battering leads to death — you have to admit, for writers the narrative of the wife-beating sheriff is the gift that just keeps on giving. Not only did the sheriff’s neighbor, author and women’s rights activist Ivory Madison, create a female vigilante who punishes bad men in comic books, but she has given lots of interviews about the Huntress, too.

For example, in 2008 Madison described the Huntress, saying that: 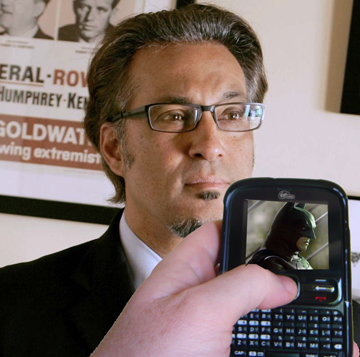 Has Ross Mirkarimi been hiding the fact that he is, indeed, the Batman?

She is a dark hero, always brooding, a loner, very tough, principled; conflicted but always takes action; (with) characteristics of Batman and Catwoman … her problems with Batman and with male authority figures is interesting … And I love that she thinks Gotham is her town. Bruce (Wayne) thinks it’s his, that’s an exciting tension to have.

It’s an exciting tension alright, especially if Batman lives right down the street from you in real life — and then out of the blue his wife comes to you for advice about a custody dispute! Oh, but in the comics Batman is not married, and so the narrative of the wife doesn’t quite fit.

Feeling caricaturized and shut out of the media discussion, the real-life wife, the woman actually married to Ross Mikarimi, aka Eliana Lopez, felt the need to be heard, too. As a result, Lopez wrote an article slamming Madison’s (& Madison’s husband’s) version of the now-epic drama.

I sought legal advice from Ivory Madison about custody issues. I did not seek her help “as a friend.” Ivory Madison promised me that our conversation was confidential and that the video that she advised me to make would be secret, to be used only in the event of a custody dispute.

Four days later Madison betrayed her word to me and contacted the police. That unfortunate Jan. 4 when Ivory ran to me saying: “You will kill me, I called the police,” I hardly could think. When Abraham Mertens (Madison’s husband) called me in the afternoon, the words I used were: “Stop this, you do not have my permission.”

What Ivory Madison and her husband, Mertens, did to me was not heroic. They have not saved me from anything. Rather, they mischaracterized our conversations to protect themselves. I know what is true.

The narrative is conflicted over this.

The sick truth is that our society has a lot of trouble telling the difference between good men and bad men. We want situations to be black or white and our leaders to be good or bad, heroes or villains.

So, does Ross Mirkarimi have a secret identity, or what? Is he the Good Sheriff gone bad, or is he the Dark Knight? Some have suspicions, some think they know, but no one knows for sure. Not yet, anyway. Until we know for sure, everyone will just keep projecting their own trip onto him. Just like the Batman.