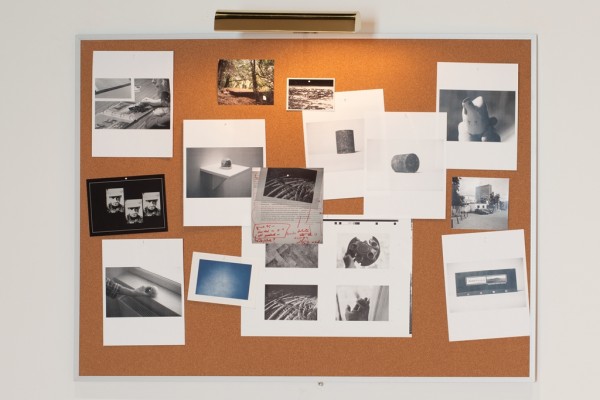 In Tris Vonna-Michell’s GTO: hahn/huhn, variation 1, viewers are invited to pore through various media that resemble the documentary evidence of a Cold War–era detective story. Slides of hazy black-and-white images — buildings, shapes, scenery — and typed sentences appear in rotation on an old slideshow screen. Pin boards exhibit photocopied images of more structures and objects; they are deliberately dark, sometimes undecipherable, haphazardly organized. Viewers can sit at a table and rifle through piles of photocopies and text and listen through headphones to Vonna-Michell performing disjointed, nonlinear narratives. All of this material, we are led to understand, has been generated by the artist’s pursuit to understand one historical event.

Through these agents of narrative — images and words, performed and written — a skeletal story emerges. We learn of an East German border guard shot dead by a West German civilian in 1962 near or within the tunnels rumored to lie beneath Berlin’s Anhalter Bahnshof. Vonna-Michell’s narrator is fixated on this story; his quest to give it form is as much the narrative as the history he pursues. From the fragmentary slideshow text we learn: My research trip to Berlin was during the spring time … I flew out with two maps of Berlin before and after the wall … Sleeping between overpasses and underpasses … 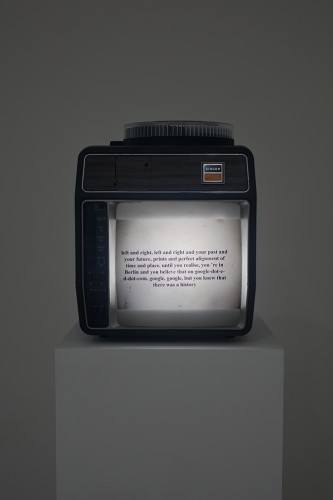 The writings of author W. G. Sebald are vividly present here. Like Vonna-Michell’s protagonist, Sebald’s narrators are concerned with tracing histories of destruction through images and internal monologues that document the material remnants of trauma — washed-out and crumbling facades of derelict buildings, postwar urban wastelands. But the wanderings of Sebald’s narrators are melancholic acts of meditation and study, and are more introspective than the feverish search for coherency that impels Vonna-Michell’s narrator.

In the accompanying audio content, Vonna-Michell uses an egg timer to set the number of minutes within which he will regurgitate a narrative. Through the headphones the listener hears a frenzied and unpunctuated outpouring of narrative details and questions that mimics the way in which the mind calls forth memories. This is the audio sibling of automatic writing, full of repetition and incomplete sentences: tunnel communications Russians Ukrainians bombing … bombs again and again … photographs documents documents photographs.

In the performed iteration of GTO, audience members can set the egg timer to a length of their choosing; in the exhibition they can handle and reorganize the stack of papers. Liberating the story from a singular medium and allowing audience members to play with its parameters and structure, the artist allows the trajectory a fluidity of form that could be considered a deliberate aesthetic choice. But the audio introduces a note of insecurity on the narrator’s part that may suggest he simply lacks control and decisiveness. I’m failing, we hear him say repeatedly, I’m going in circles.

Typed-out anecdotes of Vonna-Michell’s time in Berlin together with images of seemingly inconsequential sights gesture toward verisimilitude and completeness. The artist suggests that no stone has been left unturned on his quest — that somewhere within this sinkhole of fragmentary stuff lies the whole, unedited story.

But, while Vonna-Michell’s tone denotes some emotional investment, indeed some urgency in peeling back the narrative layers to find one picture one man to verify this story, he also plays the narrator-magician, conjuring rabbit holes and red herrings that disrupt his audience’s progress toward the facts. Vonna-Michell is an unreliable narrator; his story is lost amid a surplus of information.

GTO is about this experience: the individual’s attempts and inability to trace stable histories. Memories continually interrupt the narrator; he becomes stuck on particular details, loses focus, is mired in his own self-doubt. Although viewers are given agency to negotiate a plethora of documentary evidence — their explorations parallel to Vonna-Michell’s own struggle — in the end they can piece together only a threadbare tale. After his trip to Berlin, Vonna-Michell’s narrator discovers that a simple Google search turns up the soldier’s name: Reinold. Holt. Bingo. But viewers may not share the narrator’s gratification at discovering this clue. Whereas Sebald’s Austerlitz has personal motives for embarking on his journey, it’s hard to see what is at stake for this narrator, as there are few indicators of his character or past. It’s a puzzle with no center, concerned with the trappings of narrative but unable to access its substance. 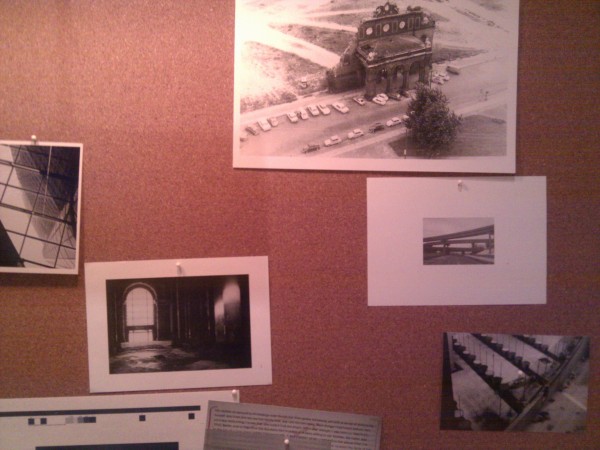