“A thing with feathers”

To curate this online show, I sifted through images on Artscope, SFMOMA’s interactive art-browsing tool. It is quite a repository, dense with marvelous images, but what stopped my image-surfing was the picture of a Macintosh Powerbook G4 laptop, because, as my snapshot demonstrates, that was the very computer I myself was using. 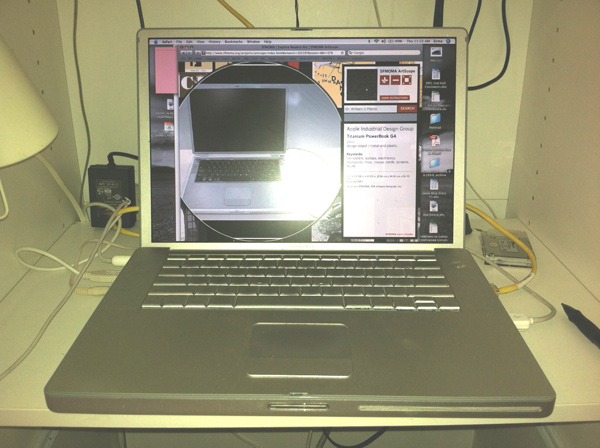 The author’s Macintosh Powerbook G4 Notebook, looking at an image of the same computer in SFMOMA’s collection. 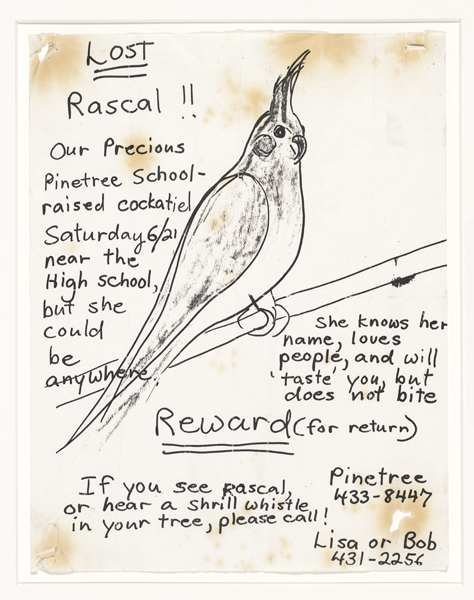 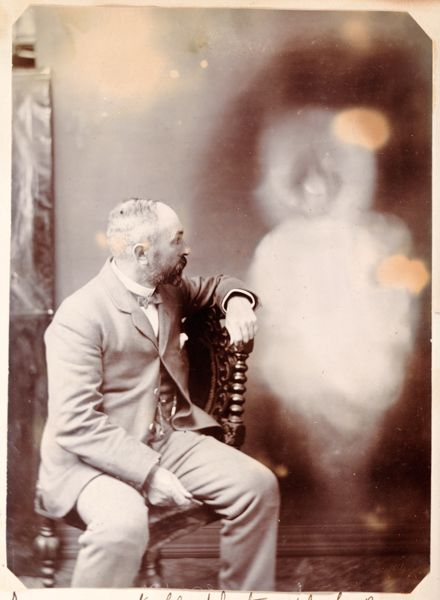 That got me thinking of the ways that hope is illustrated, embodied, theorized, and challenged in art and design. Rigo 23’s lost bird flyer and William J. Pierce’s spirit photograph both exist because someone has an optimism besotted with a sentimental unwillingness to let go and accept the reality of loss. Rascal, the lost bird, has flown the coop, or wherever he roosted, and someone thinks they can find him. It had never even occurred to me that a lost bird was ever looked for, let alone found. Strangely, I’m more convinced that someone is likely to see the spirits of the departed, as depicted in Pierce’s doctored photos, than they are of ever finding a lost bird. 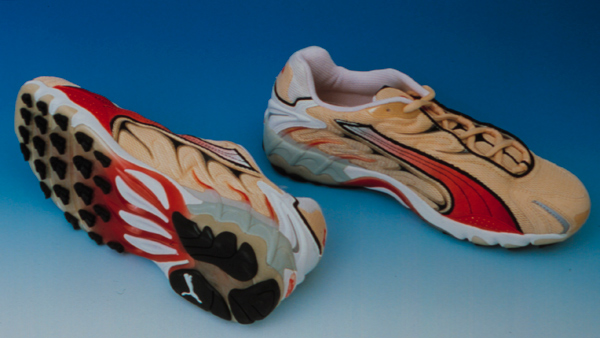 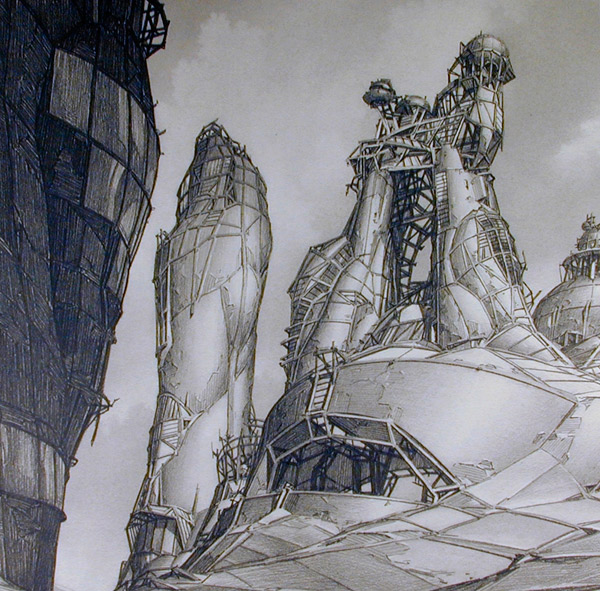 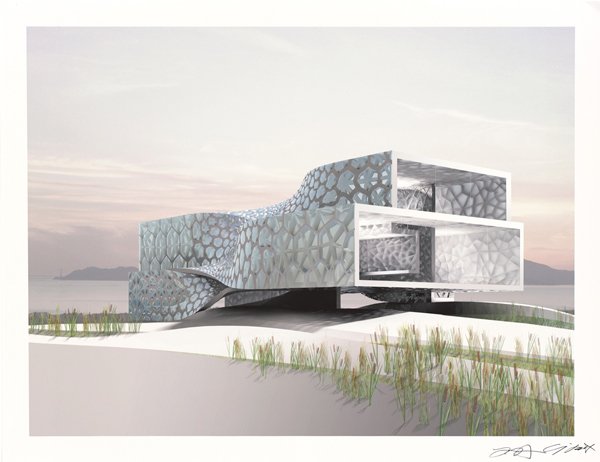 If I’m not hopeful enough, then designers and architects surely are, as is required of their trade. See those fancy Puma running shoes? Can’t you just feel the speed in you that would be unleashed the moment you donned the Celerator Inhales? Wouldn’t it be grand to take a brisk 75-mile run in those beauties and end up amidst the biomechanical towers depicted in Lebbeus Woods’s gorgeous, future-leaning landscapes? Or how about sprinting into the curvaceous confines of the Jellyfish House? 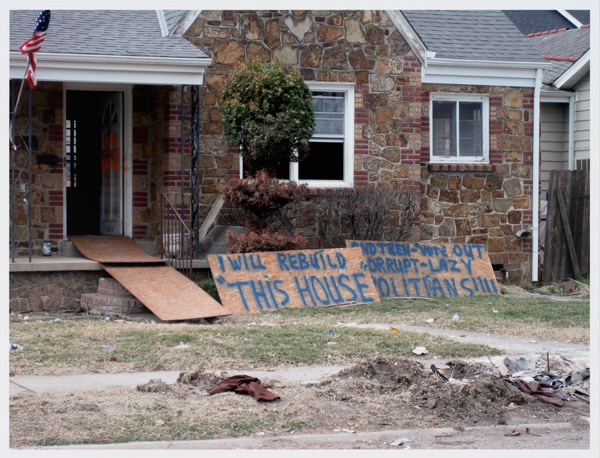 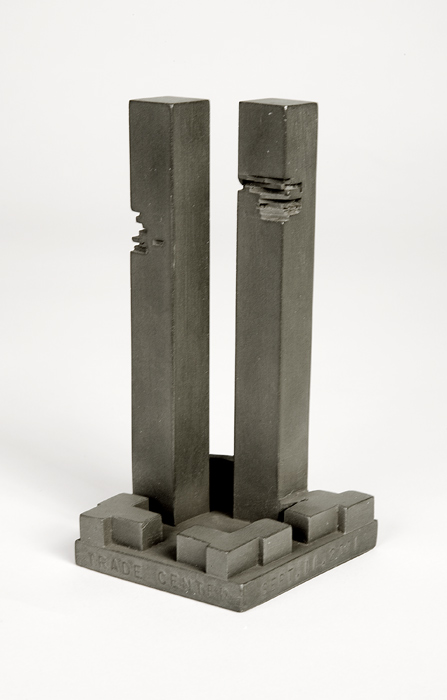 If that is more hope than you wish to mainline, how about we cut it a bit? That is easy to do. Hopeful optimism, enshrined in the very Preamble of our Constitution with its calls for forming “a more perfect union,” has in disillusion a dark twin. These paired sentiments co-exist in Richard Misrach’s photos of post-Katrina New Orleans, where one water-damaged home is fronted by a spray-painted sign that reads “I will rebuild this house, and then vote out corrupt and lazy politicians!!!” The World Trade Center towers sculpted by Constantin and Laurene Boym celebrate the upright rectitude of these landmarks of international trade while simultaneously depicting ugly gashes ripped into the side of each building before they collapsed in the 9/11 attacks. 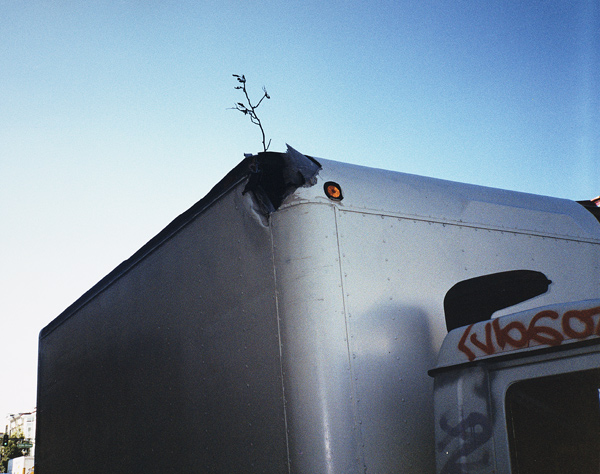 Will Rogan, Untitled, from the series Public Sculpture, 2001

This balance of hope and disillusion feels especially poignant to me these days, as we try to excavate ourselves from the smoking rubble of our nuked economy, as we listen to the stomach-churning 2012 presidential campaign rhetoric, as we watch the glorious Arab Spring victories simmer down into the mundane phase of nation-building and democratic retooling. I take comfort in Will Rogan’s photo from a series of accidental public sculptures, where a little sapling has managed to take root and grow from a crack in the corner of the roof of a derelict delivery truck. You can count the leaves on one hand, and the branches are scrawny, but they are reaching, reaching up into an ever bluer sky.

Jaime Cortez is a Bay Area visual artist and writer. He is currently working on a graphic novel focused on immigrant male work and how it shapes identity formation.