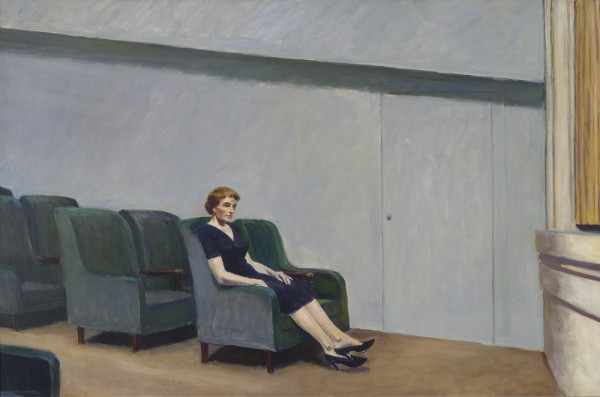 Big news this afternoon: SFMOMA just acquired Edward Hopper’s Intermission (1963), one of the artist’s largest and most ambitious paintings. Some details on the work, from today’s press release:

“Hopper came up with the idea for Intermission while he was watching a movie, and his wife, Josephine Hopper, arranged for him to work on the painting in an empty theater. However, Hopper decided to complete Intermission at his home and studio in New York City. A surviving preparatory sketch for the painting reveals that he considered including another figure in the third row. In an interview he revealed, ‘There’s half another person in the picture.’ The final composition depicts a solitary woman in a theater, sitting alone in the first row of a side aisle. Seemingly waiting for others to return from intermission, she appears lost in thought, staring off into the distance as she sits contently in a comfortable-looking dark green theater seat with her ankles crossed.”

Click the image for a bigger view. Read the rest of the news here.