Diary of a Crazy Artist: Crazy for You 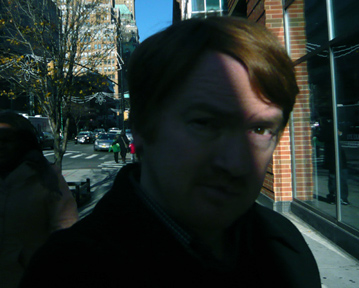 Chris Burden, arranging for his friend to shoot him in the arm in 1971, then calling it art. Then arranging to be crucified on a Volkswagen, getting long steel nails hammered through his palms, again, for art.

Robert Capa, after surviving the D-Day landing at Normandy, went on to co-found Magnum with Henri Cartier Bresson only to step on a landmine in Indochina, dying with a camera in his hand.

Martin Kippenberger, vomiting, falling down drunk, drinking himself to death at 44.

Terry Fox suffering from Hodgkins lymphoma all his life, constantly facing the fact he could die at any time.

Jorg Immendorff, arrested in a hotel, naked with nine prostitutes and 21.6 grams of cocaine found in a Versace ashtray. Immendorff suffered from nerve damage and was unable to have sex.

Carleton Watkins had a deal with Stanford to have them acquire his enormous archive of glass plate negatives. Just before the school’s representatives came to pick them up from his studio, the 1906 earthquake struck and destroyed all of them, shattering all of his life’s work into tens of thousands of little pieces. Watkins died in 1916, alone, in the Napa State Hospital for the Insane.

Ana Mendieta, falling to her death from a window, possibly suicide, possibly pushed. She was 36.

Francesca Woodman, making an amazing body of work and then jumping out a window at the age of 22.

Vincent Van Gogh, cutting off his own ear, giving it to a prostitute he knew, later shooting himself in the stomach, dying slowly over several days. He was 37.

William Henry Johnson’s wife died of breast cancer, then he got sick from syphilis and spent the rest of his life in a hospital, unknown.

Eva Hesse, becoming famous and then dying from a brain tumor at 31 years old.

Yayoi Kusama, living her life since 1973 in a mental hospital.

Rob Pruitt’s career ran off the rails after his ill-advised exhibition Cocaine Buffet, which invited visitors to do lines of cocaine off a maze of mirrors in the gallery.

William Pope.L, crawling across all 22 miles of Manhattan’s Broadway.

David Park, taking all of his paintings to the dump in order to start over again.

John Baldessari, smashing up, then cremating 10 years’ worth of his paintings after realizing they were no good.

Jack Kirby was one of America’s most recognizable, prolific and influential comic-book artists. He co-created the Fantastic Four, X-Men, the Hulk, Captain America, Thor, and hundreds of other characters for Marvel. However, Marvel claimed his art and writing was “work for hire,” which meant he did not get to keep any rights or get royalties to anything he created for them — just the hourly rate or salary they gave him.

Egon Schiele, dying from influenza when he was 28.