Five questions to SFMOMA artists, staff, or guests. Colter Jacobsen is a winner of the 2010 SECA Art Award. His work is on view in the fifth-floor galleries through April 3. 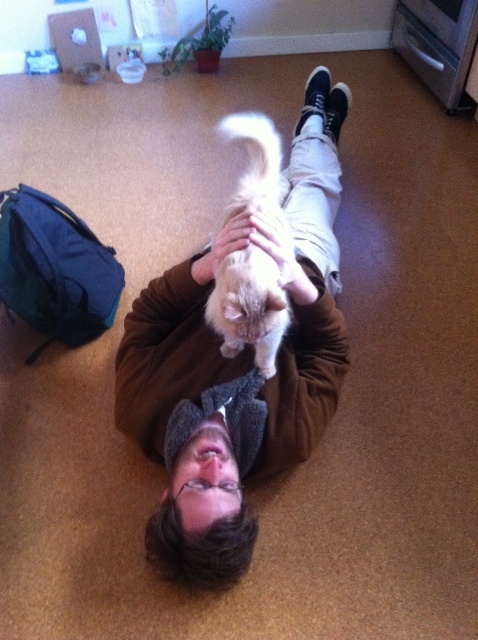 I wouldn’t steal artwork, even given the opportunity. My backpack was recently stolen. If anyone knows of its whereabouts, please let me know. Thank you. There weren’t really any valuables inside except for two full notebooks. But those are only valuable to me. I doubt the thief valued them at all. But perhaps the person did get a kick out of my (never-to-be-sent) letters to the poet Bernadette Mayer. If I had known it was going to be stolen, I would’ve written odes addressed to the most likely place that the backpack ended up … the trash can. But if I could live with a piece, borrow it or whatever (though I really love the work I already get to live with), I’d hang out with Giovanni Bellini’s St. Francis in Ecstasy. I was just reintroduced to it at Linda Geary’s studio, where she has two postcards of it near the top of the stairs at the entrance. One is way up high, and the other is eye-level. I’d love to wake up in the morning light to look at that painting. It’s in the Frick in NYC.

If you weren’t an artist, what would your gig be?

A musician, probably a bass guitarist for a disco band and a part-time DJ. Maybe a poet, too, or a namer for products like Mitche (Mitchigan) Manitou. Sometimes the phrases that I read in advertisements are so weird and catchy and working on all these different levels. Like, “Suddenly the computers were turning on their people.” That was from some cable company like five years ago. I remember reading it for the first time on the side of a bus. And just yesterday I was on BART, and I saw the slogan for breast cancer, “In It to End It.” I was struck by the function of the word It. And I went back to reading my book of poetry, The Cave by Clark Coolidge and Bernadette Mayer, and nearly the first line I read was, “Words it is not necessary to say were it. They Were It is not a game.” Obviously, words in poetry are very charged, too. Like in advertisement slogans, they can really pack a punch. I just don’t know if I have what IT takes to be a poet. But then again, poetry and music all fall under the “art” category. The most practical thing would be an art forger expert. But maybe that’s what I really am already?

Many times. It’s amazing how far you can stretch out the zero of a bank account. I generally sell books or records or something. And sometimes friends have bailed me out. I try to pay them back.

What would I find in your refrigerator right now?

A half-eaten, too-liquidy Shaker’s lemon pie. I made it from a recipe by the poet Ronald Johnson. He was an amazing poet that made his money by writing cookbooks. The recipe I followed I found on the internet. Apparently Ronald Johnson served two of these pies to William Burroughs and Buckminster Fuller (who were meeting in Ronald’s apartment in London for the first time). Apparently William Burroughs ate one whole pie himself. I’m sorry to say that mine didn’t turn out as well. I served it for dinner to Leonie Guyer, Veronica De Jesus, and her wife, Regina Clarkinia (who is a great pie maker!). It was quite a failure. I’m a terrible cook. There’s also 2% Fage yogurt. It’s a Greek yogurt pronounced fah-yeh, but of course Larry and I say “faggy.” We add our own honey from our very own lazy, friendly bees. Also, Lisa and Arvy just left ingredients for Japadogs. In Vancouver there is a food truck called Japadog. It’s run by some Japanese folk who serve a variety of hot dogs with ingredients like miso, ginger, spicy mayo, seaweed, radish, etc. It’s really good. We use tofudogs. I introduced it to my roommates on one of our weekly shared Tuesday night dinners. I was a hot dog last Halloween. My roommate Jill found the outfit in a plastic bag on the street. At the same time I was also my cat named Everything and wore a mask that resembled Everything very much. My joke for that outfit was: What did the Buddhist say when he ordered a hot dog? Make me one with Everything.

That’s a hard one. Favorites are always hard for me. I love hands, both the way they look and how much they do. Eyes, too. The OED is a great time-drain. A wine bottle opener is really neat. I also really like the apple-peeler-corer. And I SO appreciate Snow White’s Coffin. That’s the name for the Plexiglas cover for a record player, invented by Dieter Rams. Amazing. Is that a tool? I’m not sure.

Colter Jacobsen is a San Francisco artist and bookmaker. His work is on view as part of the 2010 SECA Art Award exhibition. His band, Coconut, will be performing at the museum-wide Now Playing event on March 15.