Why Is Occupy Oakland So Crazy? 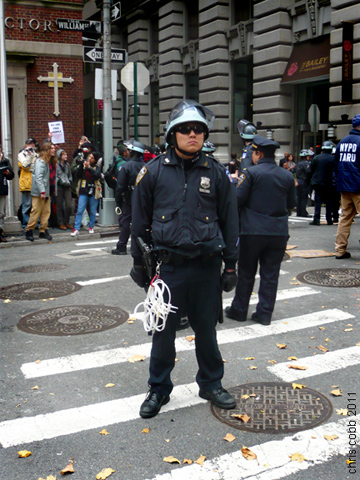 NYPD riot cop November 17, 2011. He is keeping protesters out of the street without tear gas or tasers.

The enormous conceptual art project also known as Occupy Wall Street is in the news again, and this time it’s all about Oakland. Last week 409 people were arrested during confrontations with police. But in a march of 500 protesters that means almost everyone was arrested. And it’s weird because around the country, even in New York, where I am, the protests have all been nonviolent. So maybe it’s worth asking: Why is Oakland so different? Why are these kids throwing things at police when they know they might end up in jail? Moreover, assaulting an officer is a felony, and in California three felonies triggers the Three Strikes law, guaranteeing a life sentence when convicted of a third felony. That’s no joke. So, are these kids just stupid, or is there something else going on?

It’s important to ask such questions, especially because of the Riders scandal Ishmael Reed noted in his insightful New York Times Op-Ed piece last October. In 2000 a group of OPD officers were accused of routinely planting evidence, framing and beating suspects in West Oakland. They were also accused of falsifying their reports to conceal their actions. Eventually the city paid $10.5 million to settle a civil lawsuit filed by 119 people. That’s a lot of money.

And while the media breathlessly reports on how much is being spent to deal with Occupy protesters (who, by the way, are all volunteers), it might be instructive to reflect upon the OPD’s long history of giving generous amounts of overtime pay. Yes, long before Occupy Wall Street was a twinkle in its daddy’s eye, Oakland was hemorrhaging money like you wouldn’t believe. In 2007 alone, OPD’s budget for overtime was $26 million. That makes the overtime paid out for dealing with Occupy Oakland look like a bargain. And if we want to get really get honest, let’s look at the $1.2 million spent on Operation Verdict. This was the cost of the deployment of police to handle anticipated outrage over the involuntary manslaughter verdict of BART police officer Johannes Mehserle. At the Fruitvale BART station Mehserle shot 22-year-old Oscar Grant III in the back while he was facedown on the ground. Mehserle claimed he thought he was shooting him with his taser, but nobody, including eyewitnesses, believed it. Grant died the next day. But my point is not to blanketly condemn the OPD, rather to illustrate that it is expensive running a police department even in the best of times, even before the start of the financial crisis in 2009. So, during our current budget crisis, wouldn’t it make sense to minimize expensive armed conflicts with its own citizens?

Lack of foresight, or whatever caused the first tear gas incident, has the Oakland Police Department now facing a federal takeover due to its excessive use of force. So let’s ask again: why is the Occupy movement different in Oakland? It seems like the answer is that police see Occupy Oakland as some kind of radical foreign enemy. The truth couldn’t be more different. The reality is that Americans from all walks of life are involved. There are a huge number of artists, musicians, medical professionals, poets, students, gardeners, librarians, homeless activists, etc. out feeding people and trying to provoke discussion about social justice. But the unintended consequence of this teargassing business and these mass arrests is the creation of even more mistrust in the community. What is needed is not more conflict, but real leadership. Whatever happened to community policing, mediation, and gestures of trust?

But all of this is actually a side issue. Sure, Occupy Oakland may have some troublemaking knuckleheads, but the reason so many people are in the streets nationwide is because of rampant corruption of the financial industry, the illegal home foreclosures, the aggressive destruction of unions, skyrocketing tuition, corruption in the media, and the multi-trillion dollar debt that’s wreaking havoc on our national identity. 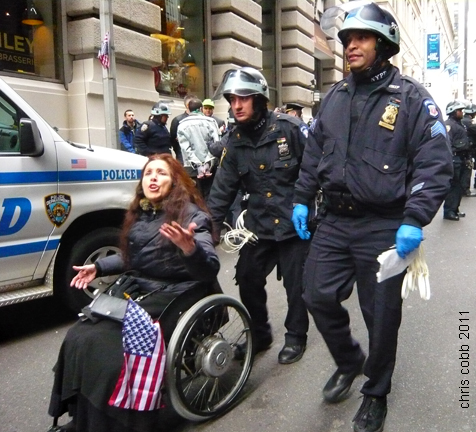 NYPD arresting a woman in a wheelchair on November 17, 2011. Note the absence of tear gas.

Yet there is a reason Occupy Wall Street advocates nonviolence: it works. Nonviolence shows self-awareness and seriousness. It’s something the voting public views as moral. Violence isn’t moral. So, why would people in an Art group throw rocks? Why would people in the Library group throw bottles? Why would a group called Visions and Goals want to assault police officers? It just doesn’t make sense. How does causing damage to property and harming people help? It doesn’t. So, the question is, who are these people who are causing these violent outbursts? My personal suspicion is they are not Occupy Wall Street protesters.

If they are anarchists and/or black bloc people, well, they throw rocks and vandalize property at every demonstration they go to. It’s kind of what they do. They think it’s fun. They think they are more hardcore than you and that nonviolence is weakness. They love to show up and bring their little circus to left-wing rallies around the country and leech on them. They do it in SF, too. They are not Occupy Wall Street. In fact, last Sunday on the march in New York (held in support of Occupy Oakland), a guy who was live-streaming OWS — Tim Pool — was attacked by a black bloc guy wearing a mask. Several people witnessed him trying to take the camera and then hitting Tim and then running off. Nobody knew who he was. This is a new development. Black bloc is black bloc, not Occupy Wall Street. Two different groups.

So, on one hand we have Cops Gone Wild, and on the other hand we have Black Bloc Gone Wild. Why don’t they get together and do a reality TV show and leave the Occupy movement out of it so Occupy can get some work done?