The Steven Wolf Endorsement for President

I figured I’d start out with a post that lets you know what you’re in for. So I’m endorsing the Republican candidate for president. Whichever of the two front runners it turns out to be. Probably Romney, but either one is good for the art world.

Wait, you’re probably thinking, most of the people I know in the art world are progressive and vote Democratic. A San Francisco artist, Matt Gonzalez, earned the VP spot on the Green ticket in 2008, after all. So what are you implying? That people in the art world don’t know what’s good for them?

Exactly. Like Reagan Democrats, who voted away their factory jobs for the fantasy of economic mobility in a post-industrial service economy, art world people tend to support the very forces that not only threaten the vitality of their economy, but in some cases undermine their very artistic identities.
The art economy is based on luxury objects. Republican policies tend to produce small groups of very rich people better than Democratic ones, and these are the people who currently pay for luxury objects and the museums that display them. Diminish the excess capital in these groups and you decrease the investment in luxury objects. Since the art market is the ultimate trickle-down economy, attenuate the top and the pain will be felt all the way down the food chain.

Pricing also comes from above. When a mediocre Warhol magically touches the $70 million mark at auction it licenses healthy transactions all across the board. When it fails, buyers and sellers become paralyzed and we have an economy that trickles in another way. I would love for someone to show me how digital clicks or something futuristically populous might recast the dynamic toward the middle class, but YouTube is not there yet. We still live in a Gagosianesque world of elite connoisseurship and capitalist speculation. Even when government funding plays a role, as it does with the one-percent tax on commercial construction for art in places like New York and San Francisco, funds originate with wealthy corporations and are distributed largely to the same artists whose work is acquired by the owners of those corporations. 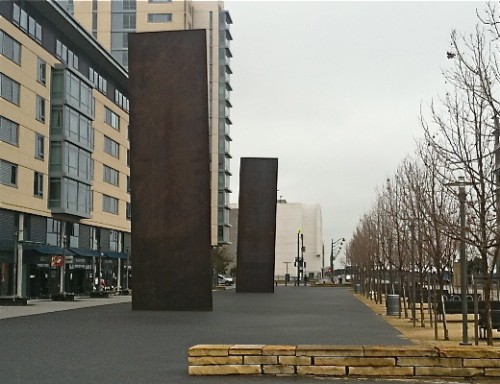 Also disturbing is the question of what would happen to all the dystopian, critique-based art practices if a progressive political agenda actually began to succeed. Those artists would be screwed. We might even have to endure another generation of irradiating rainbow paintings. We’d have to climb out of the lukewarm Jacuzzi of resignation we’ve settled into regarding the aims and failures of the historical avant-garde. Worst of all, the deliciously paradoxical gesture of charging the financial elite for the privilege of berating them would come to an end. 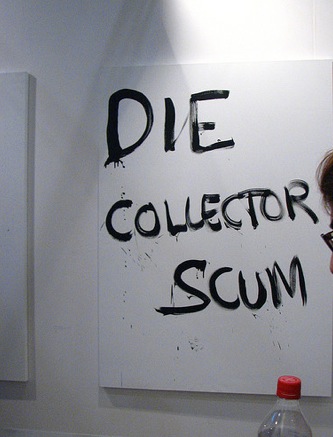 Now then, to the details of my endorsement. First, Romney. As a businessman, he seems really good at making money and balancing the books. As a devout Mormon who tithes ten percent of his income, his subcultural exoticism is ideal for an audience haunted by the fear that regular old white people just aren’t interesting anymore. Romney’s most attractive feature, however, is the secular way he glorifies capitalism’s powers of creative destruction. We should be salivating over that phrase, which could have been pilfered from a motivational speech on originality and the Œdipal conflict in art. At Bain Capital, Romney stoked the primeval fires and, like a Vulcan of capitalism, created new wealth for investors by hammering out inefficiencies and whittling away the waste. Artists talk about the need to leave the ivory tower of the white cube to make their mark on the real world. What they mean is, be like Mitt. Along the austere lines of capitalist logic, he’s carved a frieze through the American economy like some Old Testament sculptor. Just think of the mark he could make as president. 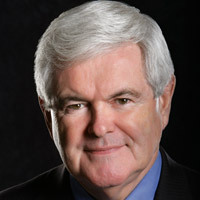 The reasons for supporting Gingrich are no less obvious. He’s connected (as my mother would say), he’s a good debater, and, according to his second wife, he’s not bound by the straightjacket of middle-class morality. With his pink cheeks, white helmet, and pursed lips, he looks like a satanic church lady. Gingrich is avant-garde in that old-timey sense, capable of dislodging a quiescent bourgeoise with reckless gambles like the one that shut down the federal government during 1995–96. And that half-million-dollar credit line at Tiffany’s suggests he’s no stranger to portable wealth. Even Republicans say some of his policies will “blow up the world.” But that kind of anxiety is often good for art. Look at what the Cold War did for American abstract painting.

President Obama, by contrast, is cautious, nerdy, and polite. He lacks the requisite bombast that constant exposure to contemporary art makes one crave. There was a time when his image seemed like the passport to a new and exciting world of, um, hope. But we’re trapped as ever in his snow globe of human rights and alternative fuel subsidies and mandated medical care. His attempts to restrict drilling and mining and pipelining and fracking make doing business in America more circumscribed than a Sol Lewitt operation of arcs and lines. Obama wants to tame the world, normalize it and domesticate it for us, so that we in turn become more pacific, predictable, and manageable. If we don’t tolerate that in the studio, the gallery, and the museum, why should we tolerate it in the White House?

What can we do, as the art people, with our expertise in communication and image production, to bring about our desired outcome for this election now that we know what we want? Although 80 percent of the electorate on both sides would vote for a ham sandwich if nominated by their party, the wishy-washy 20 points in the middle can be talked into most anything. True, to vary a phrase from Coagula magazine, most political art sucks (as does most political art writing), but we still need something like Shepard Fairey’s Hope to go viral so that it can take on the quality of Shepard Fairey’s Obey.

So far the candidates have done little to capture their charms in a pithy text and picture box. You can taste the blandness of Romney’s “Believe in America” by comparing it to the outer borough patois of the New York Mets’ 1986 World Series slogan, “Ya Gotta Believe.” Although, I admit there is something charming about the Velveteen Rabbit notion of America as a fiction that will only come to life if you believe in her, Romney needs to go all in with something scary and millennial like, “Don’t Get Left Behind,” the fear factor underlined by a reference to the old Bush education policy. Not only does this play on the electorate’s desire to go to heaven, it plays on its fear of never escaping childhood. 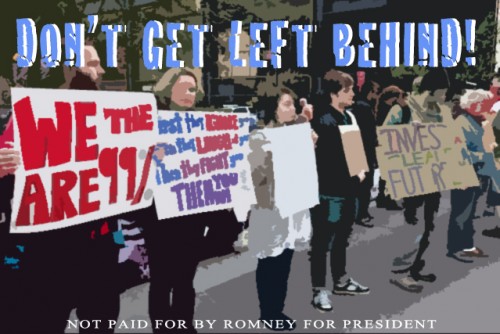 Gingrich came up with the Hulk-like “Unleash the American People.” He’s probably secretly referring to himself, but I can only hear the echo of Mr. Burns’s tagline from The Simpsons, “Release the Hounds.” Because Gingrich can’t resist the grandiose, he conjoins it with, “To Rebuild the America We Love,” which reminds me of an old joke. Guy in a crazy house pleads to a visitor that he is sane and begs for him to advocate for his release. Visitor is heading off to see the warden, convinced of the patient’s sanity, when he feels a rock hit the back of his head. Whirling around he sees the patient, who says, wagging his finger, “Now, don’t forget.” That’s Newt!

As for Obama, after four years he can’t go “Hope” again. “Yes We Can” probably can’t hold its own anymore either. Dusting off the “change” phrases certainly won’t work: “Change We Can Believe In” now sounds like something a Mormon might say, and “Change We Need” sounds too much like the Muni fare we no longer have. I’m inclined to go with “Born in the USA.” Although it would give rise to a thousand insults — “Scorn in the USA,” “Corn in the USA,”  and “Porn in the USA” to name a few — it comes with its own song, and the Boss would probably endorse him using it. 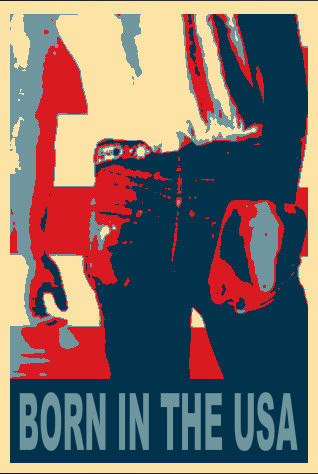