Michael Horse and the Revival of Ledger Art 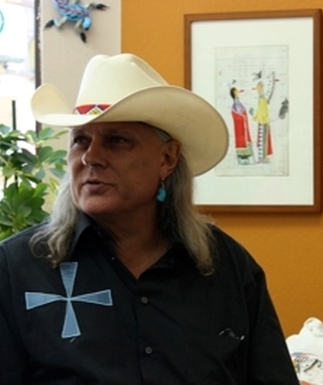 I met Michael Horse at Gathering Tribes, the gallery/cultural center he and his wife, Pennie Opal Plant, operate on Solano Avenue in Albany. The name of the establishment might describe the man himself. Horse embodies contemporary intertribal culture. He tells me that Yaqui, Mescalero Apache, and Zuni blood runs in his veins, along with a drop or two of Hispanic and European. Born in Arizona, he moved to Los Angeles, “the biggest urban Indian community in the U.S.,” when he was ten. There, Navajo, Cheyenne, and Sioux families surrounded him. He participated in the ceremonial dances at intertribal powwows from an early age. 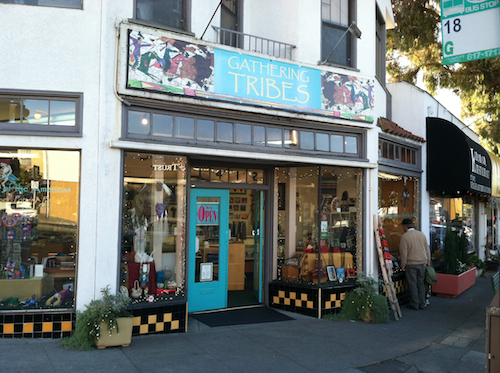 Not surprisingly, given his network of resources and diverse tribal bonds, Horse turned out to be a polymath, mastering several traditional artistic disciplines. He learned jewelry-making from his uncles. His mother trained him in the flat style of painting promoted by Dorothy Dunn at the Santa Fe Indian School. As a young man, he studied at the Institute of American Indian Arts in Santa Fe with the painter Fritz Scholder, the stone sculptor Allen Houser, and the potter-turned-jewelry-maker Charles Loloma. Horse built a successful career as a sculptor and jewelry-maker himself, working the fairs, markets, and Native American arts festivals. 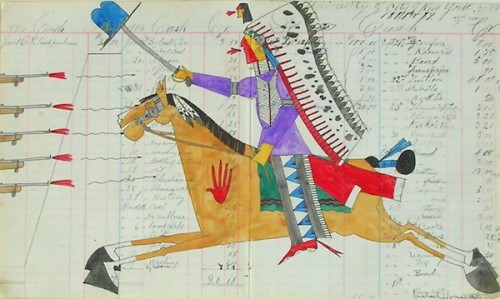 Then, Horse made a discovery that shifted his orientation as an artist: ledger art. The name itself hints at the history of this art form, which originated in the 1800s. Plains Indians, confined to reservations and deprived of the animal hides that served as supports for traditional painting, continued to make paintings using whatever materials they could find. Discarded sheets from the ledger books in which the white men kept track of their accounts were in abundant supply. These pages served as surfaces on which to preserve traditional stories and record contemporary events.

Moved by the creativity and resourcefulness of his ancestors under such oppressive conditions, Horse undertook to reconceive ledger art as a contemporary genre. He continues to work in silver and stone, but his study of ledger art and output in the genre has made him a leading figure the field of contemporary painting and a source of inspiration for other artists and cultural producers. “I don’t copy,” he clarifies, “or imitate traditional material.” Rather he employs a traditional formal vocabulary to speak about the past in the present tense and shed light on cultural continuities. 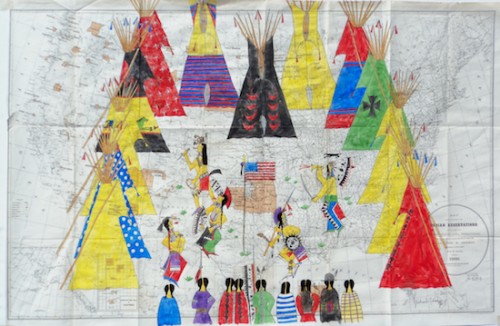 He tracks down old documents to use as canvases: maps, marriage certificates, pages from ledgers and hymnals. He outlines his figures in black against this background and fills in the outlined forms with bright planes of color. A rider gallops astride a green horse amidst a herd of buffalo. Warriors charge into battle. Clans gather to celebrate a feast day. The figures are stylized and iconic. The dynamic compositions have an uneasy relationship to the page, as if resisting containment within its  bounds. Man and beast are inscribed against a ground signifying extinction and interment — but they are light, swift, full of vitality. Many of the paintings bear biting titles: We Are Still Here, Don’t Take My Picture, This Land Is Your Land. 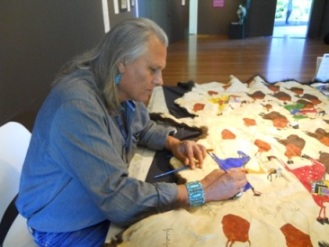 In 2010, as artist-in-residence at the M. H. de Young Memorial Museum, Horse explored ledger art and more traditional forms that contribute to the vitality of Native American culture.