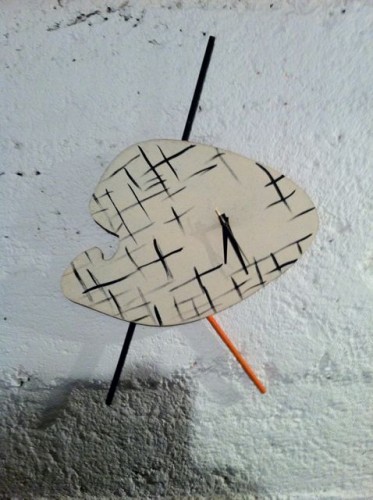 Lending art to an exhibit is a complex experience. It makes you feel like an insider, like you’re special, like you’re part of the show, even though you know that isn’t accurate. It isn’t you, but this object you somehow acquired that the spotlight shines on. When you lend a piece to an exhibit, the work seems to take on a life of its own. It doesn’t need you. It’s happy hanging or sitting in this new space bathed in perfect lighting and tended by professionals who really understand its needs. When you lend an artwork to an exhibit you never get the sense that it’s eager to come back home.

Will Brown, a spanking new Mission gallery, has opened with two concurrent shows — a book launch for Daren Wilson’s After Morandi, and Illegitimate Business, a group exhibit which mischievously problematizes issues of art acquisition and ownership. The Will Brown website describes Illegitimate Business thusly:

“This exhibition of artworks and ephemera with peculiar provenance investigates the ways in which works of art are acquired outside of galleries and auction houses. The eclectic collection of objects, from some of the world’s most revered artists, have one thing in common — they have all been obtained without any monetary transaction, and often illicitly. Illegitimate Business explores the life of an artwork after it leaves the artist’s hands and posits that the value of a work, removed from the market, is perhaps most evident in the narrative of its acquisition.”

Illegitimate Business is a collaboration between Will Brown (Jordan Stein, Lindsey White, and David Kasprzak) and guest curators Zachary Royer Scholz and Brion Nuda Rosch. Kevin Killian and I lent them our Nayland Blake clock sculpture, so I was especially eager to attend the gallery’s grand opening. Will Brown now occupies the same space at the much-missed Triple Base. As Kevin and I walked down 24th Street towards Treat, we saw a huge mob gathered on the sidewalk. “That must be the place!” Kevin exclaimed. Indeed, it was. As we wove our way through the dense mass of artists, curators, and art lovers, I found myself wedged against a short young woman who was standing beside the door. She was so stoned her eyes glowed with wonder and power, like Rasputin’s. She locked my gaze and fondled my arm as if it were the most amazing thing she’d ever encountered. 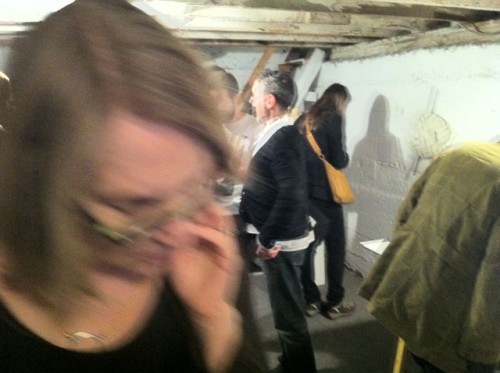 That’s me in the foreground, reading a clandestine narrative. Note Nayland Blake’s clock on the wall on the right, bare beams in ceiling above.

When we finally made our way inside, I discovered that Illegitimate Business was located in the basement. To get to it, we had to climb down a set of steep, very homemade-looking wooden steps. The basement looked like a basement — cinder block walls, low beamed ceilings, and concrete floor added an aura of secrecy and fugitiveness to the illicit art on display.

The names of the donors were explicitly anonymous (unless you were pushy like me and asked). Beside each piece was a paragraph or two explanation, written by the donor, giving the narrative of its shady acquisition. “Shady” has all sorts of shadings, of course. Nayland Blake didn’t quite give us the clock that has hung over our kitchen sink for fifteen years or more. It was student work he no longer wanted when he moved from San Francisco to New York, but he wasn’t ready to cut all ties with it, so he said we could have it on long-term loan — but we’ve got it, and we plan to keep it! Stories ranged from filching artist proofs out of garbage cans to stealing pieces from a gallery bathroom. Many of the stories left me green with envy, such as the person who was printing in the same lab as Cathie Opie, and Cathie wasn’t satisfied with how her now-iconic life-size photo of Justin Bond was turning out, so she told the anonymous owner, “You keep it.” Other artists included are Jeremy Blake, Mathew Brady, Chuck Close, Kate Gilmore, Chris Johanson, Martin Kippenberger, Harmony Korine, Sol LeWitt, Mary Ellen Mark, Bruce Nauman, Andres Serrano, Roman Signer, Kara Walker, and Carrie Mae Weems. I doubt if any other basement has housed so many drool-worthy pieces. 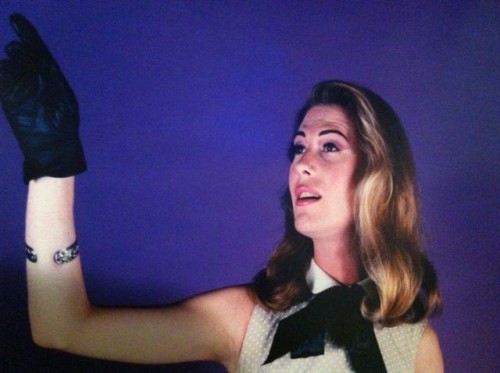 When I emailed Nayland, inquiring about the title and date of the clock, he wrote back that he “utterly forgot” about it. Whether its creator remembers it or not, the clock goes on ticking. It doesn’t need Nayland. It doesn’t need me. It can be found underground at Will Brown through February 26.