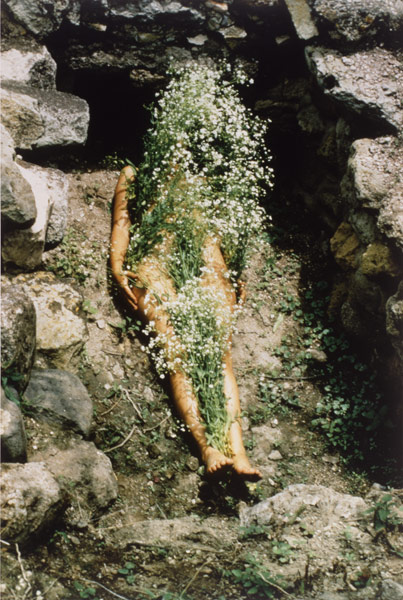 Though I first encountered Ana Mendieta and Francesca Woodman when I was barely 20, few artists since have made as strong an emotional and physical impact on me. I suppose one could write this off as the romantic over-identification of a young woman wrapped up in her own artistic attempts to express a female voice that would resist silencing. Their deaths bracketed my college years — Woodman committed suicide the year I started at Brown, while Mendieta died in a fall from a window (pushed, as I and many others believe, by her husband, Carl Andre) just after I graduated. I became entangled in their work and the web of feminist rhetoric that was woven around their practices after their untimely deaths. Years later, as a graduate student at Yale, I still found myself returning to their work, lecturing on the notion of visual pleasure and “masquerade with a vengeance” as a mode of “disrupting” the male gaze and as a form of female visual pleasure.

So when asked to write about an artwork in SFMOMA’s collection during the run of the Woodman exhibition, I decided to focus on two pieces of Ana’s from her Silueta series, created mostly while she was in Iowa and Mexico. In the many images that make up this series, Mendieta bound the female body to earth in ways that ranged from barely perceptible to physically confrontational. The two photographs  owned by SFMOMA epitomize the formal and emotional range of her work, and also mark the beginning and end of the series. In Imagen de Yagul, her earliest silueta, Mendieta’s face and body are covered with white flowers, creating a poignant contrast between her young body and the ancient, rocky Zapotec grave in which she lies. The other photograph in SFMOMA’s collection, an untitled silueta from 1978, exemplifies her later work as she turned toward more abstracted female forms, the outline of the body nearly invisible in the Iowa grass.

My relationship with Mendieta’s work transitioned from adolescent crush to something significantly more complex when, a few years after college, I began working on her first retrospective for the New Museum. In the warehouse where Mendieta’s works were being stored, I spent days going through boxes of slides, negatives, photographs, and drawings with our registrar. At night I took advantage of a friend’s offer to use the professional editing suite where he worked to create a compilation of her performance works so that they could be viewed in the exhibit. The museum initially planned to omit the performance films because there seemed to be neither the money nor the time to deal with them. But for me, Mendieta’s Super 8 films were, and still are, the beating heart of her practice — her “gallery-space” sculptures are definitely secondary, even though they were getting a lot of curatorial attention at the time as the last artworks made by Ana before her death. She created these indoor pieces, her first, while on a fellowship at the American Academy in Rome. Made from a mixture of sand, earth, and binder over wood supports, these flat floor sculptures were clearly in dialogue with Andre’s work, and more generally, with other process art engaged in an inherent critique of Minimalism. Though these sculptures seemed like a logical extension of Mendieta’s site-specific works out in nature, I felt that they looked forced and disconnected, like big, somewhat scatological cookies. 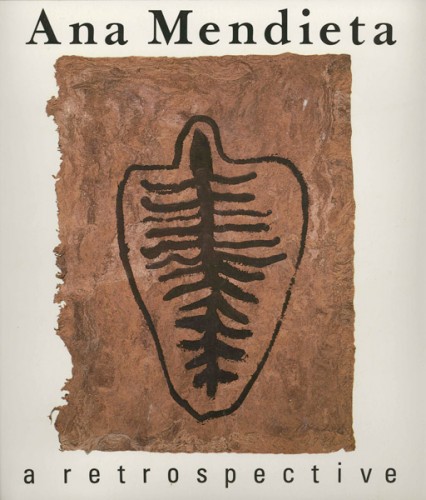 In between the storage and editing rooms, I fielded hostile phone calls from Miami contesting the Havana-born Mendieta’s affinity for Castro’s Cuba in an attempt to frame, or rather tame, her political legacy, and dealt with the complicated politics of her politically conservative and Catholic family. At one point, Ana’s sister Raquel and I discussed the possibility of positioning a museum intern at the exhibition opening in front of the monitor screening Ana’s performances, so that her mother wouldn’t be upset by the nudity. The emotions around the project became even more intense when one autumn morning a woman under psychiatric care jumped out of a window on the same Manhattan block where Ana had died — and happened to land on me as I walked with a friend to work. Though the woman was killed on impact, I escaped largely uninjured due to the gift of a millisecond, a partial step forward. (When my friend and I told the police how badly we felt for the victim, they just told us to shut up and to realize how lucky we were.) The bizarre incident was read by some in Ana’s circle as a communication or sign. Finally, the trial of Carl Andre for Mendieta’s murder, which was to begin in 1988 just after the exhibit concluded, cast a long shadow over the project. It was impossible not to identify the Mendieta retrospective as a cause, as a means of resisting her erasure from the annals of history, and more generally, as a protest against violence against women.

The Mendieta exhibition was in many ways anathema to the downtown art scene of the late eighties, immersed as we were in a poststructuralist framing of identity, gender, and sexuality. Even at the museum, I felt that a number of my colleagues believed the retrospective had been taken on more as a political act than out of a conviction that Mendieta’s work was artistically and historically significant. It was easy to dismiss her passionate work as essentialist, instinctual, and spiritualistic, when juxtaposed against the sober, language-heavy feminist work of such artists as Jenny Holzer and Barbara Kruger. I learned the hard way how far apart these feminist visions and discourses were from one another in the course of organizing a symposium in conjunction with the retrospective — a panel discussion that focused on the tension between spiritual and performative, body-centered work associated with seventies feminism, and the artistic practices of the eighties, which were more overtly wed to ideas of social construction and poststructuralist theories of representation (of course we now understand, in retrospect, that such a binarism is deeply problematic).

My motivation, as a young feminist, was to understand why these differing sensibilities and theoretical frameworks, all of which had been crucial to my own intellectual and personal development, were considered irreconcilable by people I held up as role models. While I (naively) expected feminist affinities to emerge triumphant during the symposium, the positions of the panelists — Judith Wilson, Nancy Spero, Rosalyn Deutsche, Kate Linker, Arlene Raven, and Lyn Blumenthal — seemed even farther apart than before. Heated arguments erupted in the audience as people became increasingly incensed by what they perceived as an outright dismissal of Mendieta’s and Spero’s work. Whereas Spero viewed her practice as deeply political and visually aggressive, it appeared that the pomo set regarded it as quaint and out-of-date. One of the most disturbing moments for Nancy came when one of the speakers dismissed her work as simply “beautiful.” 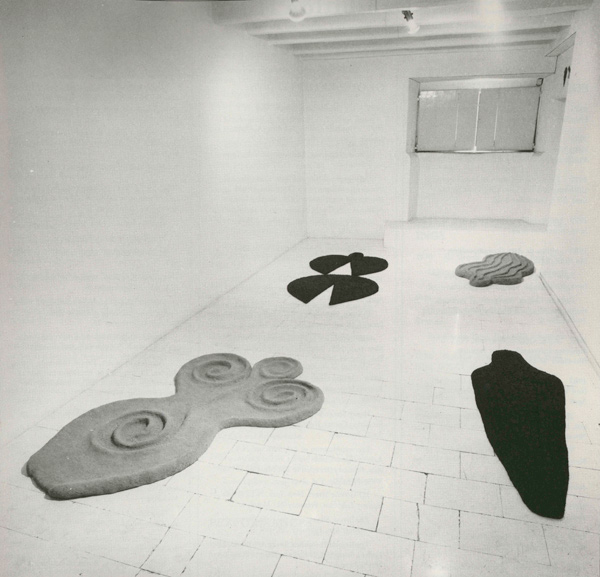 Around the same period, I was one of several young curators asked by A.I.R. Gallery to help it become more “relevant.” A.I.R. (Artists-in-Residence) Gallery was founded in SoHo in 1972 as the first artist-run gallery for women in the United States. Although only fifteen years had passed since its creation, the collective was experiencing a backlash against its mission. Despite the fact that our group of curators was intrigued by the possibility of reframing the direction of A.I.R., we were unable to come up with an exhibition plan that any of us had confidence in — the rift between the older, established members of A.I.R. and us was just too wide. A few years before, Ana Mendieta had also been associated with the collective, though she remained deeply critical of the racism inherent in the A.I.R. brand of feminism. She became involved in A.I.R.’s Task Force on Discrimination against Women and Minority Artists, and in 1980 she organized the exhibit Dialectics of Isolation: An Exhibition of Third World Women Artists of the U.S. Ultimately Mendieta broke ties with the group, realizing the extent to which its white, middle-class members were unable or unwilling to address issues of power and diversity in their community.

Mendieta’s curatorial and political activity demonstrates the extent to which she understood gender, race, and ethnicity as inextricably linked to their social construction. This critical awareness is also evident in the artworks she produced during her short career — content that has become “legible” only after more recent scholarship overturned the limiting ideological assumptions underlying theories of representation and the body. Rather than remaining fixed in the essentialized categories of goddess worship and the “earth mother,” Mendieta’s siluetas demand to be read through the more disruptive lens of exile and identity formation. As Mendieta simultaneously exposes and covers her body, burns a female form with gunpowder, or documents another washing away in the surf, she simultaneously places her identity as a Latina woman under erasure and fills it beyond its frame. It’s this combination of uneasy excess, contingency, and negation that keeps Mendieta’s performance work “relevant” and unsettling in a productive sense. 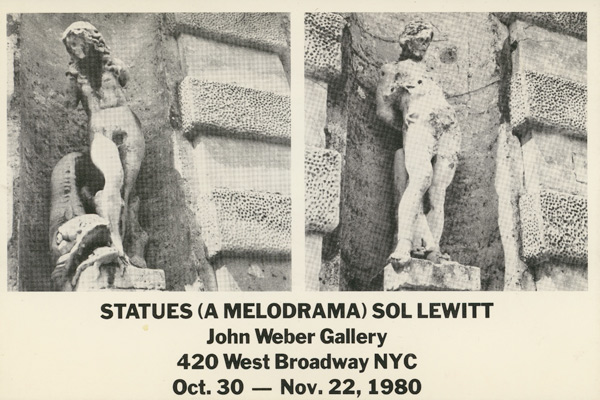 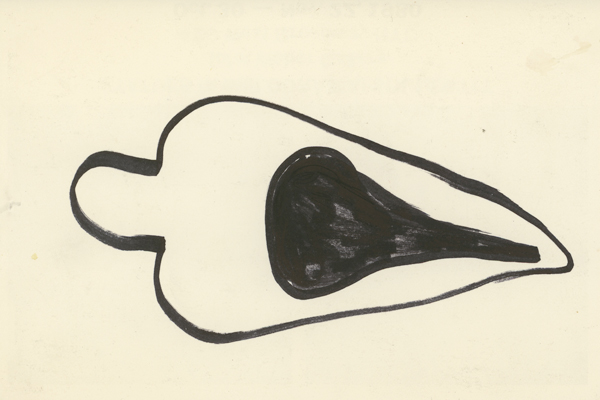 Back of postcard invitation to Sol LeWitt’s exhibition Statues (A Melodrama) at the John Weber Gallery, New York, 1980; ink drawing by Ana Mendieta

After the New Museum exhibition opened, Ana’s sister Raquel presented me with a gift: a small ink drawing done by Mendieta on the back of an invitation to Sol LeWitt’s 1980 show Statues (A Melodrama) at the John Weber gallery. The juxtaposition of Ana’s simple archetypal form with the two classical marble statues in contrapposto stance represented in LeWitt’s photolithographs enacts a similar maneuver of assertion and negation. Of course there are numerous layers to unpack in this tête-à-tête between Mendieta and the older LeWitt, a close friend to both Andre and her. The association of melodrama with LeWitt’s work is already wry, perhaps a nod by the artist to the criticism being directed at the rational and intellectual bases of his practice at a moment when more psychologically expressive work was gaining recognition in the art world. In Mendieta’s hands, the melodrama here is nothing more than Ana subtly claiming the critical distance she had been deprived of by both cool white feminism and the largely male-dominated world of Minimalism and Conceptualism.

It would take years, though, for the art world to catch up to her: to acknowledge, much less celebrate, an unruly space where difference and culturally normative hierarchies are continuously interrogated and contested. During the 1980s, poststructuralist authorities informed me and the rest of my generation that the female body was an endgame, that it could never really be ours. At best, its pleasure was on loan in the most compromising of circumstances, through masochistic identification or masquerade. Fortunately, Mendieta and others challenged this narrative, rewriting the terms of this critical relationship, and empowering an embodied practice for those of us who followed.

Karen Fiss is an associate professor at the California College of the Arts. She is currently film curator for the exhibition Encounters with the 1930s, opening at the Museo Nacional Centro de Arte Reina Sofía in Madrid in fall 2012, and is also at work on two book manuscripts: From Nation Building to Nation Branding and Modernity on Display. Her books include Grand Illusion: The Third Reich, the Paris Exposition, and the Cultural Seduction of France (University of Chicago Press, 2010) and Discourses: Conversations in Postmodern Art and Culture (MIT Press, 1990).