As I made my way through the pantheon of exhibitions on display for L.A.’s current citywide retrospective Pacific Standard Time (PST), which celebrates the city’s fertile postwar period of art production, I couldn’t help but ponder: what of today’s many visionary young L.A. artists? What does all this history mean to them? Given the fifty-five years or so effectively encompassed in this gargantuan project, couldn’t the organizers have stretched its parameters just a little bit wider to bring us up to the present day? 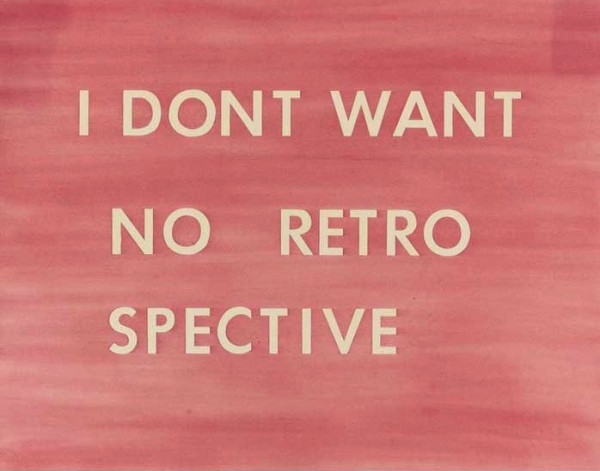 It’s a tall order, I’ll admit. And this is not, of course, to deny the worth of a retrospective. Nor is it anything but a wonderful opportunity and indulgence to mine all of the rich art history on view and get drunk or weary on its offerings. The care the producers of PST have taken to include every corner of artistic production in southern California during this period is phenomenal. From the big hitters (Ed Ruscha) to the lesser-knowns (Senga Nengudi) to the niche (the woodwork of Sam Maloof), it seems anyone who so much as breathed within the remit of L.A.’s inner art world or along its margins is remembered here.

In many of the exhibitions, the works on view amount to more than a snapshot. In Proof: The Rise of Printmaking in Southern California at Norton Simon Museum, for instance, a strong visual argument is made for the impact of the Tamarind Lithography Workshop on L.A.’s nascent art scene, as well as claiming L.A.’s position as central in the graphic arts renaissance at this time. And for those not intimately acquainted with this particular segment of art history, there are some surprises here, too. Who knew the children of the Sunshine State could produce the dark, tormented works on view in the Pasadena Museum’s L.A. Raw: Abject Expressionism in Los Angeles?

But what of all this history if we can’t mash it up and make it anew? And who better to do that than today’s bright young things? Among all the retrospection, it was refreshing and energizing to find a small exhibition that didn’t present so much a time capsule as a history repurposed and given new life. In her exhibition Mural: Remix at LACMA, Sandra de la Loza samples images of the now-peeling, forgotten, or erased Chicano murals of ’70s East L.A., duplicates and reworks them into psychedelic patterns housed in light boxes. There is something of indigenous Native American art here, and of the drug-infused psychedelia of the ’60s and ’70s, but also of the technological alchemy of the present. 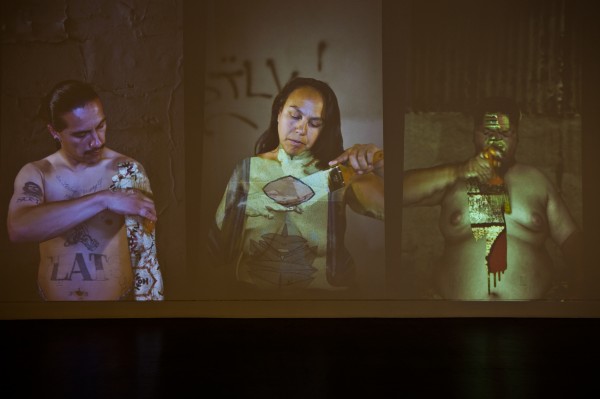 Projected on the wall are videos on loop of contemporary Chicano artists — three of which are visible on the screen at one time — their nude torsos monumental in scale and facing the camera. The figures include a slender, twentysomething woman and a muscular, tattooed man with the word SOMOS inscribed across one arm beneath a picture of Che. As they look outward at their audience, they paint themselves with broad brushstrokes in an array of colorful, kaleidoscopic patterns that shift and shimmer in a trick of video post-production. These undulating forms insist on the complicated identities of their subjects, and reflect the unstable life of murals that require constant restoration to resist the erosions of time, weather, and vandalism. As with the art form they have so successfully mastered, marginalized Chicano communities must continually assert and rebuild themselves with that same resilience in order to claim their history and future.

The video installation is a simple and poignant statement of Chicano self-determination. And like all compelling art, the specific reaches toward the universal. I am not Chicano, but I can nonetheless see something of myself in these nude figures as, with honking cars and other humdrum sounds of urban noise in the background, they engage in a process of continuous self-renewal.