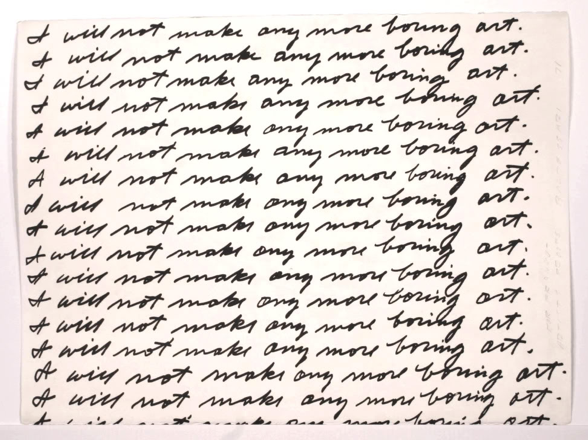 Before making this artwork, which itself was originally a text piece for a wall, John Baldessari had the epiphany that his art was horrible, or that he had not been making what he wanted to be making. So after 13 years living a lie as a painter — he was fed up at not getting anywhere with his work — he did what any self-respecting artist should do: he took it all to a crematorium and had it burned. In his Cremation Project (1970), he destroyed almost everything he made from 1953 to 1966 (which was about 500 paintings).

He then went further by interring the ashes in a bronze, book-shaped urn and placing a death notice in a San Diego newspaper. By doing so he turned all his artistic frustration and existential anxiety into something useful and cathartic. I can’t think of a better work to consider as we enter into the New Year.