Diary of a Crazy Artist: Art in America Is Just Like the Khmer Rouge 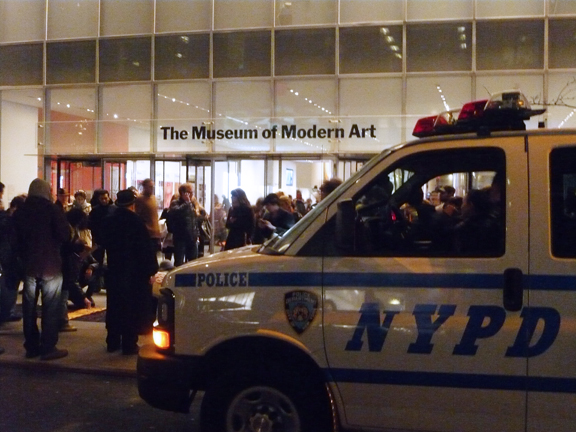 NYPD van called to MoMA Friday night when an Occupy Wall Street protest was going on in support of union workers.

Last week, when Art in America compared an Occupy Wall Street speaker to the Khmer Rouge, I thought maybe they just lost some of their credibility. Come on. One day Occupy Wall Street is all filthy, dirty, homeless hippies, and the next day they are a cult of genocidal maniacs? You can do better, Art in America. For your information, here’s how Time magazine described the Khmer Rouge:

The Khmer Rouge killed nearly two million Cambodians from 1975 to 1979, spreading like a virus from the jungles until they controlled the entire country, only to systematically dismantle and destroy it in the name of a Communist agrarian ideal.

So, OK, maybe some might think I’m taking it too seriously. But am I? What makes this comparison especially poor is that the the Khmer Rouge actively sought out intellectuals, artists, and writers to murder in their Killing Fields. Hell, there’s even a movie about it. It’s easy to find, too, because it’s even called The Killing Fields. But the Art in America author might not have known that. Of course, there’s the possibility that the author of the piece didn’t know who or what the Khmer Rouge was and they just didn’t know what they were talking about.

It all came about when an Occupy Wall Street offshoot called Occupy Museums was supporting the Sotheby’s art handlers’ union by doing unwieldy and loud protests at MoMA. No one had a gun. No one advocated violence. No one was hurt. There was no vandalism. Yet they are like the Khmer Rouge.

So on one hand Art in America can breathlessly report on Damian Hirst‘s fabulous spot paintings, and on the other it says artists that stand up for union workers are like rampaging murderers. So is it appropriate to say things like that in an art publication, or what? If I don’t like Jeff Koons because he makes giant puppies out of flowers, is it OK for me to say he’s just like Adolf Eichman or Heinrich Himmler?

Here’s what I’d like to see in Art in America (and while we’re at it, Artforum, Flash Art, Art Newspaper, Art News, Frieze, etc.): for them to actually do some investigative journalism for a change. Maybe a series on the wisdom of art schools recruiting 18- and 19-year-olds and encouraging them to get BFA degrees costing $125,000 or more. Or how about exploring the issue of thousands upon thousands of young American artists who live with crushing student loan debt? Or how about some investigative journalism on art education and how many artists end up abandoning art because they never learn how to translate it into even a middle-class living? All of these are huge issues, and they get very little press.

Can I ask out loud who else besides Occupy Wall Street is bringing these issues up? Who else is making economic unfairness in the arts an issue? I mean, is it right and natural that many artists will be doomed to a life of poverty or have to choose to abandon their interests as makers of things so they can become secretaries, waitresses, or accountants instead? Or do we only want to worship the successful and the famous and pretend that all that other stuff doesn’t exist? Is it crazy to talk about this stuff?

Tags: Diary of a Crazy Artist