Occupy Wall Street: It Ain't Over Yet 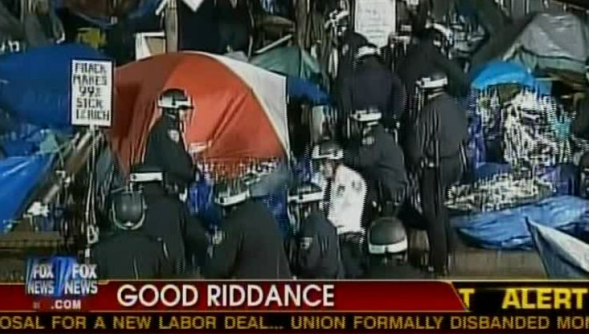 People always clap for the wrong things. — Holden Caulfield from The Catcher in the Rye, in Chapter 12

Although I am living in New York I still follow the news on SFGate, KQED, KGO, and other news outlets. What has surprised me is how completely wrong Bay Area media has been about the Occupy Wall Street movement, its motivations, its strategy, and its tactics. In particular, how occupying a park is a TACTIC in the overall STRATEGY to draw attention to the corruption and greed in the system. Important distinction — Tactics vs. Strategy! Besides being confused, the coverage in the Bay Area has been so negative and bizarre, it seems like Fox News is whispering in their ear. That interests me because criticizing Fox News has been a kind of preoccupation of mine for the past two months.

Case in point: at Occupy Wall Street last month I watched postmodern philosopher Slavoj Žižek delivering a passionate speech to the protesters gathered on the steps of Zuccotti Park. After his speech he saw I was making fun of a Fox News reporter, and so he approached me. In his tense, rapid manner, he explained how Glenn Beck was the best thing that had ever happened to Fox News and that Beck expressed Fox’s vision so clearly that they just had to fire him. The danger, Žižek said, was that Beck’s facade was so pure that it became his own real identity. That, in turn, meant that it was harder and harder for Fox to pretend they were really a news organization and not an arm of the Republican party, simply parroting right-wing talking points. And then he ran off into the crowd.

Then yesterday, almost exactly a month later, New York City police officers demolished the camp at Occupy Wall Street, and Fox News went on the war path. Their attitude on television was essentially this: Finally, all the dirty hippie protesters were being thrown out. Finally. Good riddance. 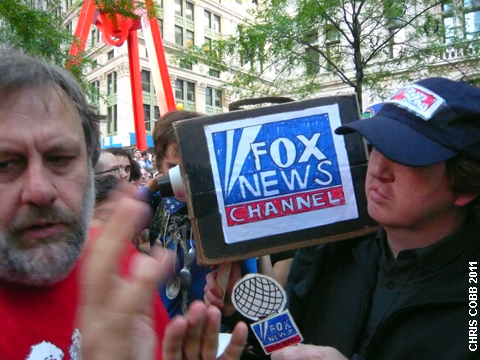 Slavoj Žižek after his speech at Zuccotti Park.

If all you knew about Occupy Wall Street was from mainstream media sources, maybe GOOD RIDDANCE seemed like a fair thing to say — even if it was opinion, and not, in fact, news. Fox even went so far as to use the term GOOD RIDDANCE (all capital letters) as an infographic over footage of the police tearing down tents, throwing books in Dumpsters, and cutting down trees to which some protesters had chained themselves. So as I watched this venomous “news coverage” on TV, it made me think of what Žižek had said — of how the media depends on maintaining an air of legitimacy for it not to be viewed as just some political sideshow.

But then, that’s what media and politics are all about, isn’t it — the battle for the appearance of legitimacy and who is the most real. Take away the appearance of authenticity and nobody will listen to what you say. It’s problematic because secret motivations drive so much in society right now, especially in the media and the power structure — financial interests, political interests, etc. And it’s getting harder and harder to know what is real and what is not. Fox News President Roger Ailes has even admitted on multiple occasions that Fox views itself as a partisan political operation. So why does that matter? Because news is supposed to inform the public, not lie to it.

But on top of the media empire (Fox is just one part of it) is Rupert Murdoch, who happens to own Fox News and its affiliated organizations. One such organization was News of the World in Great Britain. News of the World was recently shut down because it came out that some of the staff had been bribing police to obtain access to the voice mailboxes of prominent politicians, celebrities, and private citizens. Apparently this had been going on for years. The phone hacking scandal, as it became known, caused the British prime minister’s communications director, Andy Caulson, to resign, as he had been editor of News of the World before his appointment. Then, on July 17, just two months before Occupy Wall Street began, the head of Scotland Yard — Britain’s most senior police officer — Sir Paul Stephenson, announced his resignation because he had hired another News of the World editor as an “advisor.” Numerous other News of the World editors and staff were arrested, and the reporter who leaked the story, Sean Hoare, was found dead on July 18 in his apartment. His death is still unexplained.

So when I saw that coverage of the Occupy Wall Street movement has been mostly negative, I wasn’t surprised. Looking at how News of the World, its editors, staff, and its owner, Rupert Murdoch, have broken the law repeatedly and colluded with police to get personal data and access to private records, well, what else are they capable of? I mean, if your organization is willing to bribe police, what else is out of bounds? Surely Fox and other news media wouldn’t deliberately try to smear a legitimate grassroots movement opposing such things as financial industry corruption, media corruption and bias, and political corruption. No, of course not, the news is always fair and balanced.