It's November 5th. What the Heck Is Guy Fawkes Day? 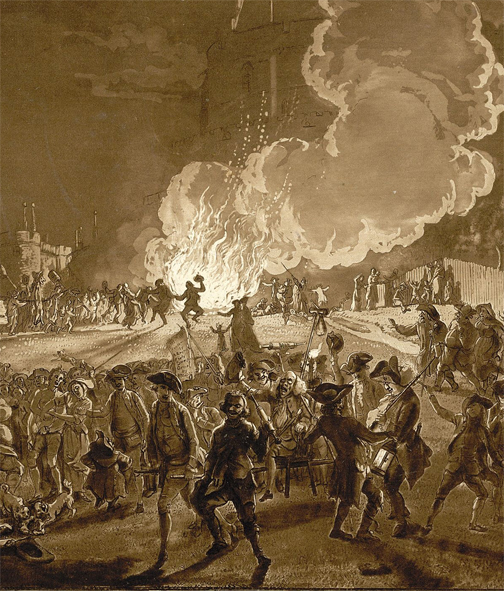 Paul Sandby, aquatint, 1776. View of the festivities in the lower court of Windsor Castle during Guy Fawkes Night, showing the gathering near the bonfire and fireworks in the sky.

Guy Fawkes Day has been celebrated for centuries in Great Britain, but it only became popular in the United States after the graphic novel V for Vendetta was made into a movie. In V for Vendetta (by Alan Moore), the main character is a masked anarchist who seeks to topple the fascist government ruling the Great Britain of the near future. The mask he wears is purported to be the face of Guy Fawkes. In the film, the masked avenger, named V, methodically assassinates and/or bombs his way through the key figures in the regime, hoping to inspire others to rise up, as well.

Of course, V doesn’t only wear the mask, but he also models himself after the English antihero. Fawkes was himself a Catholic co-conspirator of the failed Gunpowder plot of 1605. The plotters’ aim was to assassinate King James I of England, for whom the King James Bible was named. At that time England was very hostile to Catholics. Just a few decades earlier Henry VIII had created the Anglican church specifically to be rid of Roman Catholic influence (which prevented him from divorcing his queen). Henry also destroyed a number of Catholic churches and looted them for his treasury. James was raised as a Protestant king, and so the Gunpowder plot was basically about a small group of Catholics who were trying to stage a coup d’état.

Fawkes had been in the military for 10 years and knew all about explosives. So he was chosen to use gunpowder to do the actual blowing up of the House of Lords, where James was. In doing so, the plotters hoped to put a Catholic monarch on the throne, and that would, I guess, change the world.

But then at the last minute someone ratted him out. Fawkes was caught. He was arrested and then condemned to be:

“put to death halfway between Heaven and Earth as unworthy of both.” Their (the plotters’) genitals would be cut off and burnt before their eyes, and their bowels and hearts removed. They would then be decapitated, and the dismembered parts of their bodies displayed so that they might become “prey for the fowls of the air” (from Antonia Fraser’s Faith and Treason; pp. 266–269). 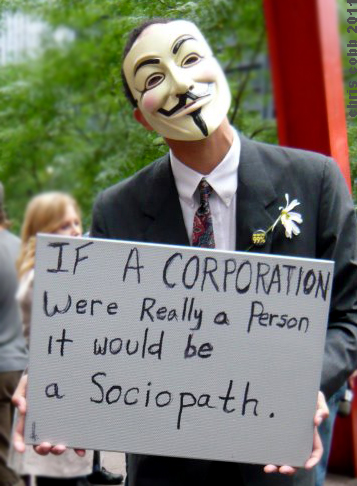 After witnessing this happen to two of his co-conspirators, Fawkes freaked out and jumped off the scaffolding, breaking his own neck. Nonetheless, they still dismembered his dead body. After all, this was the era that Michel Foucault described in his Discipline and Punish: The Birth of the Prison, when criminality was believed to reside in the body, not the mind. To get rid of criminality and evil, logic then dictated that the body had to be sadistically punished. Thus was the fate of Guy Fawkes.

Thereafter, to celebrate the saving of King James I, citizens were encouraged to light bonfires on November 5th, and the celebration has been known variously as Bonfire Night, Guy Fawkes Day, or Guy Fawkes Night. At one point fireworks were added along with the bonfires to more realistically resemble the explosion that never happened. It is an odd holiday, since it appears to be encouraging a kind of anarchy while at the same time it is supposed to be about preventing anarchy. November 5th, then, can mean different things to different people. In fact, the American usage of the term “guy,” slang for any man, comes from the name of Guy Fawkes.

More recently, the Guy Fawkes mask has been used by the leaderless, anarchic hacker collective called Anonymous. Today, November 5th, 2011, Anonymous is planning to deface or shut down the Fox News website in retaliation for its distorted coverage of Occupy Wall Street. It is also planning to expose numerous members of Los Zetas, the murderous Mexican drug cartel, who have apparently kidnapped a member of Anonymous. Many fear that exposing the identities of the Zetas might get them (both the Zetas and Anonymous members) killed by rival drug gangs, taking Anonymous from mere protesters into the realm of Wild West–style vigilantes. Anonymous has given statements to the press expressing frustration at the absence of the rule of law in Mexico and the lawlessness that has led to tens of thousands of murders. But do the hackers really want blood on their hands? Can any of these questions even be answered?

In the closing scenes of V for Vendetta, as V‘s protégé is about to blow up the parliament building on November 5th, she is asked about V‘s identity. Her response? “He was all of us.”

So what the heck is Guy Fawkes Day? Was he really “all of us”? After taking in all these paradoxes, the anarchy, V for Vendetta, the hacker collective, Occupy Wall Street, and Bonfire Night, maybe Guy Fawkes Day is whatever you want it to be.