Our One on One series features artists, writers, poets, curators, and others, from around the country, responding to works in SFMOMA’s collection. You can follow the series here. Today, please welcome media artist and writer Abigail Child. 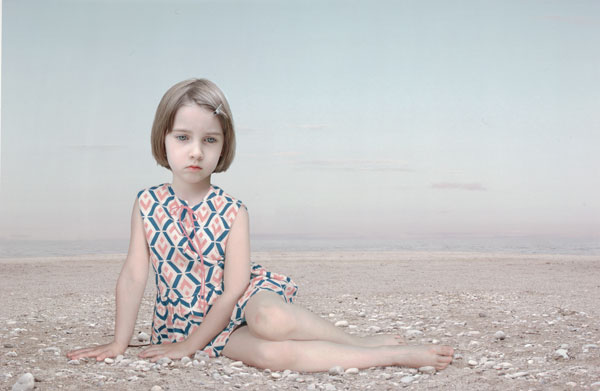 I write the piece below and am reminded by a friend that Lux’s photographs verge on kitsch and contraband. She emails me:

“You are feeding right into her arms…she wants to create these mythical worlds through predictable Photoshop manipulations…i.e. making heads and eyes larger than life (on purpose) and shrinking the clothing. It’s a cheap, peek-a-boo game.” She adds:“Paulin looks like a manipulated Photoshop child on a decontextualized fake beach, sampled from a Norman Rockwell painting (the pending rape is in the process that Lux has applied so aggressively and predictably to her).”

I agree, in part, as I do feel there is an implied rape in the photo. Yet my interest in this particular work was in contrast to a photo of a nude pubescent girl in the SFMOMA collection, made by a male photographer in the 1940s, which feels more exploitive, a “real” rape.

Coming out of a year spent in Italy, I see Paulin as enacting a contemporary Annunciation: the private body vying with exterior forces and the tension in the image to maintain both. I believe Lux is questioning technology in her processing of the real: she is comparing photography to painting, asking us to interrogate representation altogether. Her work returns us to court portraiture: Velàzquez with his Infanta or Goya’s dwarfs come to mind. In these portraits, the real has its own baroque bias; the distorted bodies are given dignity to hold our gaze.

So though I do think much of Lux’s work plays in dangerous territory (and does not always succeed), this particular photograph seems more about the impossibility or suggestiveness of the closeted private reverie — with a historical and ultimately personal resonance. Thus I write:

Thinking alone turned away from us, her eyes down, inward

The colors of her dress match the landscape — light blue and pink-touched sunset clouds — crisscrossed against straight diamond patterns against horizontal lines, in front of foam, line of surf slightly curled, curved.

The child both inviolate and about to be violated

Her eyes refuse us but we are looking.

She exists in clarity and obscurity. Behind her eyes, an oval face with hair clipped back in school girl style.

Delicate as her colors, pearly as her skin, she sits in shells but is not born of them. A diffident Botticelli: unremarked, unromantic, unrevealing. The shells themselves, cracked fragmented refuse.

A quirky Venus then.

My interest lies in the suggestion of behind-scene, in the outside of the picture. In the narrative of the viewer in the imagination that the picture exudes, excludes. It is not the light of the dove making an annunciation.

It is anti-annunciation. It is a ground out of which we are now in an age of silicon and virtual.

Here is this kid.

Virginal but not innocent. That ambiguity, that duality — body sitting stolidly on beach. Patiently with knees tightly closed against incursion. Her body wants to lift away but the photographer has said no, turn to me and she does.

On sand hands turn away. They motor through time as if they are older. She is a Venus lost, a Venus not yet, a Venus of imperfection with subtle threat. She is archetype of the lost child, portrait of diffidence and somehow fear and also patience. There is something so delicate, so aching in her expression. One wants to say, “It’s all okay.” But it isn’t. Not anymore. The future will decimate, will penetrate her pensiveness.

A child of thought, then. Feminine thought made child, made looking not at you but through you in her mind’s recesses she dismisses you and commands you. She is queen in her plaid patterning, a Madonna of sorts.

Both child and Madonna, she is one, a queen, a baby child, an adoration, a turned away.

The spiritual is the ground of body in thought. Not the division but the overlay, the intermix, the thought inside the body inside time, inviolate and about to be.

This is the child perceiving the apple and known to be of it.

This is knowledge obtuse sad melancholic and knowing.

She is dwarf; in many ways it wouldn’t be surprising if she were one

One that you can’t cuddle because she is her own, her own child. Owlish. A Minerva then—

Pensive and knowing. An early Minerva that can stand up to all our viewing. The subject a refusal, a refusal of becoming our object. She withstands us, becomes us. She invites us. And refuses again. We cannot penetrate her pensiveness and in that Paulin is contemporary; she appears to be available but is virtual. She is not there for us. She is the locus of our stories but her story is other. We live outside this plane and that for me is part of the photo’s greatness, that it reestablishes distance and difference, annunciates the insubstantial.

Abigail Childis a media artist and writer whose original montage pushes the envelope of sound-image relations to make, in the words of LA Weekly, “brilliant, exciting work … a vibrant political filmmaking that’s attentive to form.” Winner of the Rome Prize and Radcliffe Institute, Guggenheim, and Fulbright fellowships, as well as a participant in two Whitney Biennials, Child has had numerous retrospectives: at the Buena Vista Center in San Francisco; Anthology Film Archives (in conjunction with the New Museum, NY); Harvard Cinematheque; EXIS Korea; and Reservoir, Switzerland. She is author of THIS IS CALLED MOVING: A Critical Poetics of Film (2005), and is currently editing THE PURSUIT, a feature shot in Italy of the life of Percy and Mary Shelley in the form of imaginary home movies. An Abigail Child monograph of critical articles + DVD was published by Metis Press, Geneva, in April 2011.

Tags: Abigail Child, achild, Loretta Lux, One on One