Five questions to SFMOMA artists, staff, or guests. For this iteration I sat down with London-born, Berlin-based artist Simon Fujiwara. Tonight at 8 p.m. he performs The Boy Who Cried Wolf, in which he tracks his own identity and sexuality through three sites (the bar, the wedding, and the mirror). There is also a rotating stage. 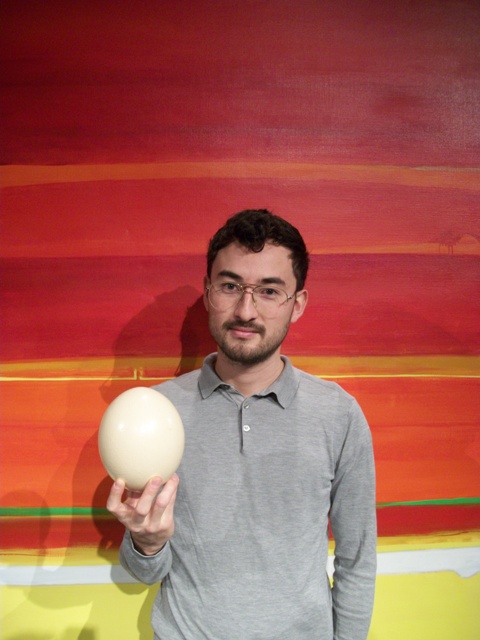 I collect a lot of things. Every winter I go to Mexico, and I generally arrive with nothing and send a container of objects and artifacts back to Europe. My studio basically looks like a prop shop; there’ll be anything from hands of saints taken from deconstructed churches to old safes. I collect a lot of fake books; anything from secret libraries containing spaces to put objects in, or books that are safes. I also collect eggs, all kinds of eggs, from stone eggs to Fabergé eggs to rubber eggs that bounce. There is no hierarchy in price or style, it just has to be egg-shaped. Anytime I see an egg I buy it. In general I collect fake food. Every city tends to have a handicraft relationship with fake food. Mexico is mostly papier-mâché hand-painted; in Japan they are always highly synthetic rubberized foods, often for window displays.

Generally the people whom I consider artistic or intellectual heroes are people that I don’t feel I want to meet. I may be wrong, and probably am, but I am afraid to jeopardize my personal relationship with their work by knowing them. George Bataille would be one person I would have liked to have seen physically, but I would have preferred it if he had been sitting at a table in a café where I could observe him, rather than actually having to sit down and have a conversation with him. We share the same birthday, as well as an egg fetish.

If you weren’t an artist what would your gig be?

If I could separate the means and the end result, I’m sad to say I’d probably be in advertising. I have an ever-growing repulsion to advertising at every level, but particularly the way it has affected public space, that everything we touch, see, smell is branded and screaming some message at you. My own work is full of messages that don’t offer any kind of end product. I work with complicated narrative histories that begin with my interest in a particular notion or moment in time, and expand into larger stories that I perform or create settings for. In architecture school students are taught a similar language to advertising. Even with fictive architectural proposals, students are encouraged to “sell” the building or to think about clients. It was in architecture school that I began to be interested in this language of presentation, a language that is constantly trying to promote something without quite knowing why. In architecture there is no such thing as an object for the sake of it without having a promotional attitude behind it. I find it interesting in the sense that props and objects in everyday life become part of a grander narrative that could be about the global economy, something politically motivated or simply something to satisfy a client. I could see the worst part of myself, the evil twin version of myself, in architecture PR.

Yes, on Friday I bought a fur coat and ran out of money.

A tape-measure. I’m always happy to see one, and they are almost always nicely designed.

Simon Fujiwara’s The Boy Who Cried Wolf is part of two days of events in conjunction with the exhibition The Air We Breathe, which focuses on marriage equality. On Thursday Now Playing took over the museum. Today, Simon’s performance is preceded by a panel discussion on marriage equality with Paul Boneberg, Cleve Jones, Jennifer C. Pizer, Andrea Shorter, Camilla Taylor, and Thomas Watson.