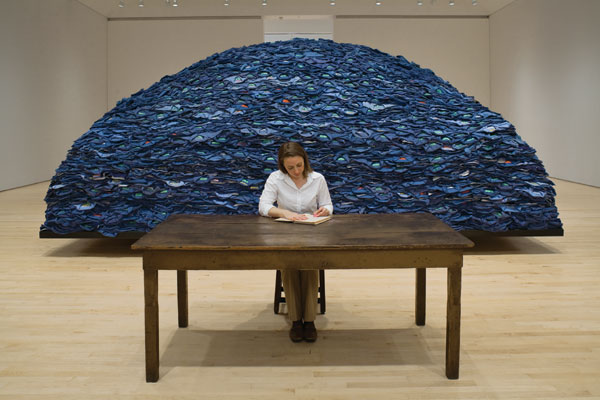 On a visit to SFMOMA back in 2007, I turned a corner on the second floor and found myself sharing the gallery space with a heaping blue mountain. I walked the perimeter slowly, curious, tentative, dwarfed. As I came to the front of the blue mass, I saw a wooden table, and seated at this table, a live human figure hunched over a book, hard at work.

This was Ann Hamilton’s indigo blue, an installation first erected in 1991 in Charleston, South Carolina. Peter Cho writes: “In 1991, Hamilton was one of 18 artists asked to create a site-specific work in Charleston. Hamilton chose as her site a large, empty warehouse, where she created indigo blue. On a 17-by-24-foot steel platform, she piled 14,000 pounds of folded, used blue work uniforms. Working at a table, with back to the mound, was a seated figure, who erased texts from historical military manuals line by line.”

While living in Charleston, Hamilton became interested in labor history as the story of an erasure of the body, of the living, breathing flesh and blood expended to produce accumulated wealth. The body of the laborer is useful in capitalism only insofar as it generates this wealth. When the working body is no longer profitable, it can be discarded — socially, economically, psychically. This condition — which is not relegated to the historical past, but continues to this day, here in the United States and across the globe — is reproduced powerfully in indigo blue. The lifeless uniforms can be read as a tribute to the lives lost — “lives” here meaning both the biological facts of mortal bodies, and “living” in a more abstract sense — in industrialization. I also see them as a testament to the ways in which processes of primitive accumulation and exploitation are ongoing.

For those in the “virtual class,” it’s not bulging biceps and surging quads that are given over to an employer to be applied to the production of goods, but the body’s capacities to think, to communicate, to work collaboratively, to invent, to imagine. Think of your average information worker locked up in an office park, offered the “luxuries” of on-site laundry, salon, and gym services in return for exceedingly long work days and mobile devices giving the employer constant access to the worker. While as an image of violence, this is not as spectacular as the exhausted bodies of factory workers — the people who build the smartphones to which we are chained — these labor relationships, too, are a kind of erasure. 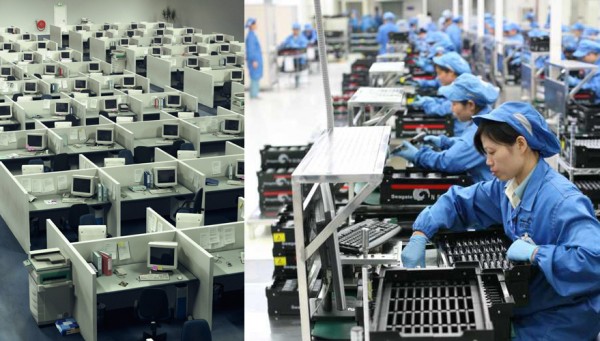 Hamilton multiplies erasures throughout indigo blue. Her blue mountain of disappropriated labor, no bodies in sight, is juxtaposed against the body of the worker at the wooden table, erasing the text line by line. This very much alive and working body casts its shadow on the heap of dead labor piled behind it, signifying everything the uniforms are not. Stephen Vincent, who served as one of the attendants at the table during the SFMOMA installation, describes the work:

Every day from 12 to 4, a different person, a paid worker ($10.30 an hour), sits behind the table, in a white shirt or blouse, and systematically — word-by-word, line-by-line — uses a pink Pearl eraser to obscure the type from the pages of a manual, entitled International Law Situations, a Naval War College.This day I have been assigned to be the “eraser.” The book — which can be lifted a couple of inches off the table — is attached to a slightly slack, tethered string.

The text is erased from back to front. Hamilton describes this process as “making room for another story,” a story of the human body. In this way, Hamilton’s work brings embodied physicality to the invisibility of labor under capitalism. I like to read Hamilton as insisting that exploitation did not end with the industrial revolution, but continues to this day, all around us.

Confronted with indigo blue, it is impossible to ignore the size of the blue mountain, the number of uniforms, the intricate and difficult work that must have been required to install the piece. I value the installation for its dizzying ability to simultaneously represent and remove, to bring backstory to the forefront and to display its own erasures and absences. Hamilton often frames her work as a process of making visible — asking, “how can materials evoke the presence of something that’s not stated?” and how “making might accrue enough weight in the world in the face of all the unmaking.” This sentiment is helpful for me as a maker, as a writer. While in my depressive moments I worry that art speaks only to those already, in one way or another, incorporated into its sphere, constructing visibility and creating an environment of un-erasing brings forward the power of the body and human ingenuity. Making can confront forces of silencing and forgetting, domination and destruction.

Alli Warren is a poet residing in Oakland. Recent publications include Acting Out (Editions Louis Wain), Well-Meaning White Girl (Mitzvah Chaps), and, just out from Lew Gallery, Grindin. From 2008 to 2010 she cocurated The (New) Reading Series at 21 Grand. Since 2003 she has fiddled with a weblog.

Tags: Alli Warren, awarren, One on One