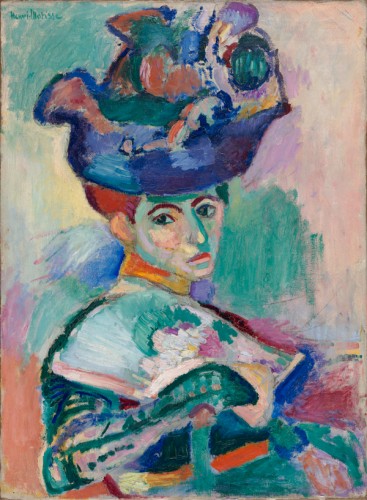 After a terrific run at SFMOMA this past summer, during which we welcomed more than 350,000 visitors, The Steins Collect has now moved on to Paris, where it opened October 5 as Matisse, Cézanne, Picasso … L’aventure des Stein. Part of what I heard again and again about our exhibition is its appeal had as much to do with the stories as with the art itself. As hard as it was to see the exhibition packed up both the art and the stories will take on new resonances, with shifts in context,  in Paris (RMN-Grand Palais, until January 16, 2012) and New York (Metropolitan Museum of Art, February 21–June 3, 2012). The Paris presentation marks the return of Henri Matisse’s Woman with a Hat (1905) to the spectacular glass-roofed Grand Palais — the very venue where it made its controversial debut as part of the sprawling Salon d’Automne in 1905. At the time, Matisse set the price for this portrait of his wife — one of 10 pictures he submitted to the show — at 500 French francs (or about $100). After our book went to press, Claudine Grammont, one of the Paris-based essayists for our catalogue, shared a new discovery of a letter from Matisse to the Paris gallery Chaine & Simonson declining an offer of 300 francs. As much as the artist needed the money, the figure would have been insulting. In this letter of November 18, 1905, Matisse claimed he would take no less than 450. With no such offer by the show’s end, however, he accepted 400 francs from Leo Stein — a 20% break in the price — and the Stein/Matisse story began. By the terms of its bequest from Elise S. Haas in 1991, Woman with a Hat normally never leaves SFMOMA. It was only with special permission from Elise Haas’s heirs that we were able to travel it on the occasion of The Steins Collect. 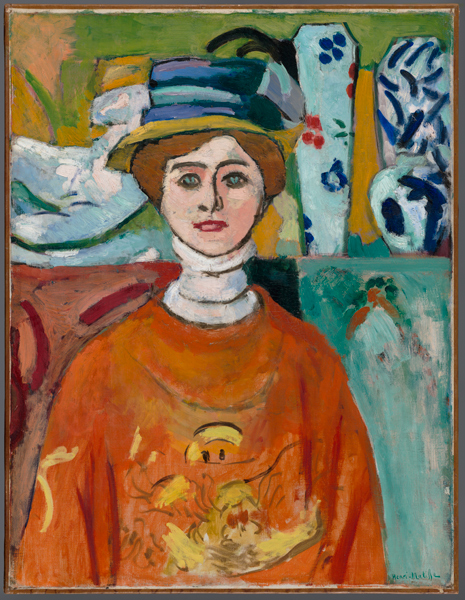 One of the opportunities our preparation for the show offered was the chance for sustained research on works in SFMOMA’s collection, both those that we knew were once owned by members of the Stein family, as one would expect, as well as others with Stein connections. While our Stein-owned Matisses are on the road with the exhibition, the artist’s Girl with Green Eyes (1908) is now installed at the entrance to our second-floor galleries. The picture’s original owner was Harriet Lane Levy, who moved from San Francisco to Paris in 1907 with her next door neighbor, Alice B. Toklas. With Michael Stein’s encouragement, Levy purchased the picture nearly wet from Matisse’s studio, then returned with it to San Francisco a couple of years later. Among the Gertrude Stein papers at Yale, we discovered a 1911 letter from Levy to Alice (who famously remained in Paris to be with Gertrude) in which she mentions her Matisse having made the Examiner. One of our researchers, Jared Ledesma, then headed to the San Francisco Public Library and located, on microfilm, the full-page article in question, “Do Deadly Diseases Inspire Art’s Masterpieces?” with an unlikely caption for the picture of a very fresh-faced girl: “Matisse paints faces crazed by absinthe drinking.” 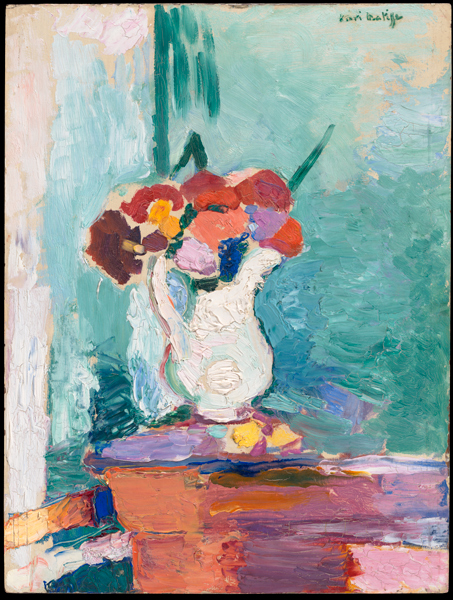 We were able to share some of these stories of the Steins’ influence in our exhibition and catalogue.  But as the book approached 500 pages and the number of illustrations nearly that many, it wasn’t possible to include plates of the more modest pieces that the Steins somehow had a hand in their friends acquiring. I’m grateful to Open Space for the chance to picture some of them now. The Steins’ friend Annette Rosenshine was, like Sarah Stein, an artist herself. Rosenshine was deeply intrigued by the Matisse paintings Sarah and Michael brought with them from Paris to San Francisco after the 1906 earthquake. She accompanied the Steins back to Paris at the end of that year and took an apartment upstairs from theirs at 58 rue Madame. Rosenshine was among the first group of students at the Académie Matisse, and, inspired by Sarah and Michael, accumulated a handful of modern pictures. “Influenced by Mike’s practicality, I learned not to squander my trifles,” she remembered. “With the saved francs I bought three Matisses” — a drawing, a watercolor, and Matisse’s Flowers (1907), which she purchased for $35. 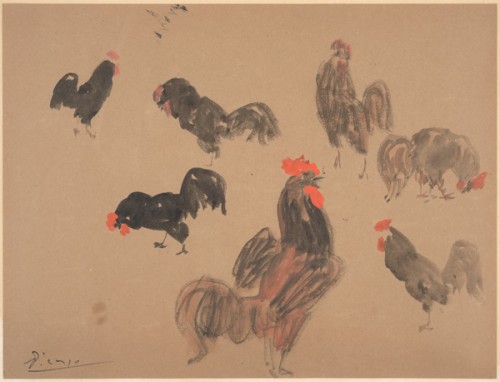 Rosenshine also picked up a few works by Pablo Picasso, recalling that “on quite a different mission, I was to accompany Gertrude and Sarah Stein to Picasso’s studio to select one of his drawings in exchange for a Chinese gown of mine, which he had admired and wanted to give to Fernande … Bowing to the superior tastes of the Stein ladies, I let them do the selecting, and merely nodded my head at their choice. Picasso was most generous and gave me two ink drawings and a watercolor entitled Cocks.” Years later, Rosenshine sold much of her collection to Levy, who in turn left her collection to SFMOMA in 1950. 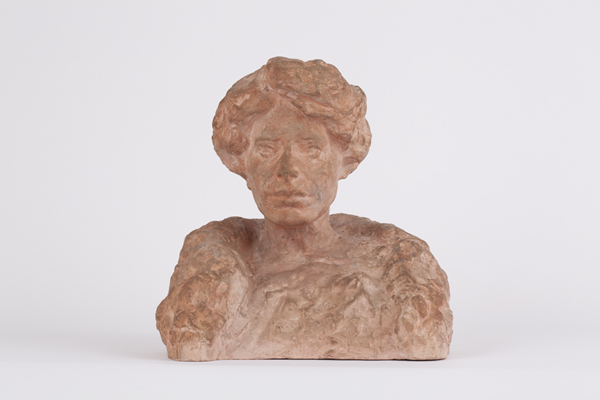 Coinciding with our exhibition, Harriet Levy’s account of her Paris years has just been published for the first time by Heyday in Berkeley as Paris Portraits, Stories of Picasso, Matisse, Gertrude Stein, and Their Circle. One of the tales Levy shares of her time in the Steins’ orbit is that of having her portrait made by the Swedish American sculptor David Edstrom. This, too, was eventually left by Levy to SFMOMA. We considered putting it in The Steins Collect. But even after Michelle Barger, our objects conservator, gave the terracotta bust new life by cleaning it, it was just too unappealing. The experience of having Levy sitting for her portrait in his studio was clearly not a pleasant one for Edstrom.  As Levy herself recalled, Edstrom said to her things like, “You have an awful effect on me,” and, “Every time my thoughts are high you drag them down.” 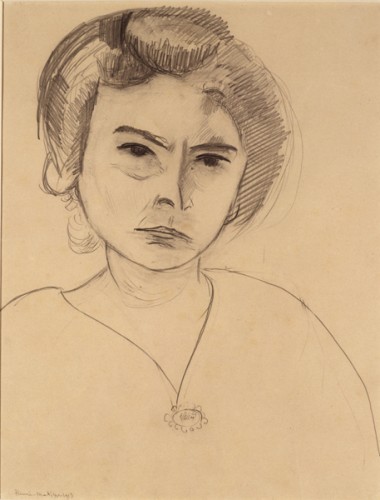 Matisse’s drawing of Levy, on the other hand, is beautifully executed, but equally unflattering. This may have had something to do with the artist’s reluctance to make her portrait at all until she offered him an unprecedented $100, per Levy family lore. 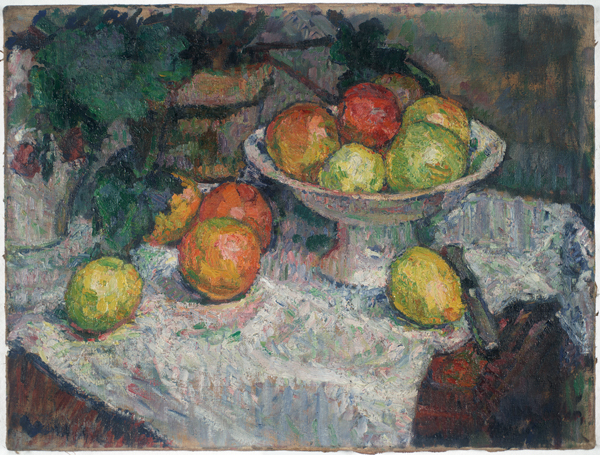 One last picture we were very pleased to have on view here as part of The Steins Collect was Still Life with Fruit, ca. 1906–7, by German artist Mathilde Vollmoeller-Purrmann. This handsome oil painting was left to SFMOMA in 1991, without a positive attribution. Not much was known about the picture except that it had once belonged to Sarah Stein, and that it was shown as “Hans Purrmann (?)” (Vollmoeller’s husband) in the 1970 Four Americans exhibition of the Steins’ collection organized by the Museum of Modern Art in New York. Thanks to the persistent research efforts of the Metropolitan’s curator Rebecca Rabinow, and her work with the experts at the Purrmann-Haus in Speyer, Germany, the author of this long-unidentified picture is now known.

Janet Bishop is curator of painting and sculpture at SFMOMA. Along with Cécile Debray for the RMN-Grand Palais, Paris, and Rebecca Rabinow and Gary Tinterow of the Metropolitan Museum of Art, New York, Janet was one of the lead curators for The Steins Collect. She was curator-in-charge for its SFMOMA presentation this past summer.