Art is for everyone! The people are at your door! 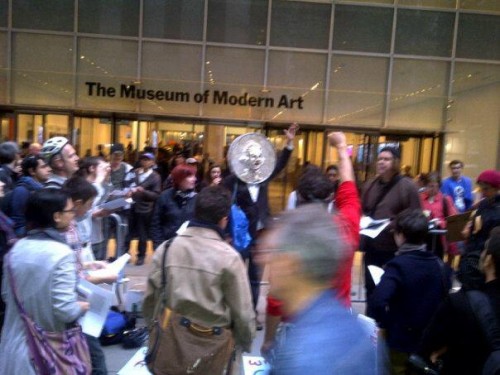 It is hard for me to focus on much regarding the Occupy movement other than the two consecutive nights of police raids and brutality at the Occupy Oakland camp. However, the artists bloc of the Wall Street West movement is slowly coalescing, and plans are in the works for events, workshops, and discussions regarding the stake of artists in this movement for economic justice. Many artists are already jumping into the movement with poster campaigns, creative direct actions, flash mobs, and more.

Across the country in New York City, a group of artists and art workers have initiated a group called “Occupy Museums.” Over the last two weeks they protested in front of the Museum of Modern Art and the New Museum, and joined the picket line of art handlers in front of Sotheby’s who are still locked out of their jobs. In addition to drawing local artists, art workers, and art appreciators, Occupy Museums’s actions have drawn members from the Art Handler’s Union and Teamster Local 814 and have received vocal support from the Guerilla Girls. These actions are sparking controversy among those in the New York City art scene and beyond, as many people have voiced the opinion that art auctions and private art fairs are perhaps a more appropriate target for such protests.

The goal of Occupy Museums is to raise consciousness around the role of museums and to encourage an era of new art and experimentation outside the narrow parameters set by the market. It is also asking these questions: What part of our culture is controlled by the 1%? Who are the gatekeepers of cultural institutions? Outside the New Museum protesters chanted, “Museums, open your minds and your hearts, and listen. Art is for everyone! The people are at your door!” So, people, what do you think?