Why Not Forgive All Student Loans to Artists to Stimulate the Economy? 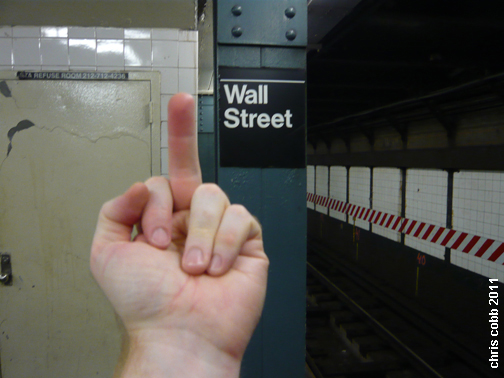 If big banks, credit card companies, and Wall Street firms can get hundreds of billions of dollars in bailouts and loan forgiveness, why can’t the students of America? Or more precisely, the art students of America? The way I see it is that the most creative people in the country are waiting tables, slaving away as secretaries, and doing menial jobs because their art degrees haven’t translated into earning potential. As a consequence, possibly tens of thousands — or maybe hundreds of thousands — of creative people around the country have given up their art and switched to non-art activities in order to pay the rent. So in 2009 (most recent year for census data), out of the 89,140 BFAs, 14,918 MFAs, and 1,569 PhDs granted in fine arts, just how many of those people are really making a living in the arts? My guess is: not many.

Does that seem fair? When the housing bubble popped and the economic crisis began, politicians never expected the bankers and Wall Street traders to give up their careers. Just the opposite is true — they were rewarded for making it bad for everyone else. So what’s good for the goose is good for the gander, right? Forgive all student loans and let art students (current and former) start with a clean slate, too. It just might do more for the arts in America than even the WPA or the creation of the National Endowment for the Arts in 1965.

As more scrutiny is being given to the financial industry, people are beginning to see what a scam it really is. Even Nato Thompson (UC Berkeley grad and now the chief curator at New York’s Creative Time) recently launched an impassioned Facebook conversation debating the merits of having a nationwide simultaneous default on student loans. I think his idea was that it might somehow hurt the Wall Street holders of the debt. But I prefer a more rational approach — namely the one that Studentloanjustice.org favors — direct political action in the form of supporting legislation. On their site they explain just how shocking the situation really is: 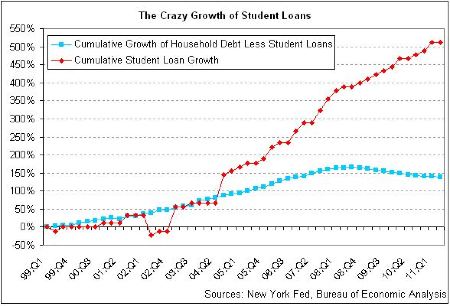 So, basically, student loans are a huge growth industry, and big banks and Wall Street only stand to benefit from them just like they have with mortgage debt, derivatives, ATM fees, paycheck cashing stores (which, by the way, are allowed to charge interest up to 650% on a payday loan), and credit card debt. In fact, according to Consumerreports.org, student loan debt is set to hit one trillion dollars later this year. That’s more than all U.S. credit card debt combined! So when will that bubble pop? Will that bring another market crash? Will banks get bailed out again and students all go to debtor’s prison? Somebody should be asking these questions, but so far I haven’t heard a single politician, pundit, or talk show host — and certainly not a single Tea Partier — seriously address the issue.

So while politicians fret over America losing its edge as an innovator, they are, at the same time, tossing their most creative people to the loan sharks. In fact, loan sharking laws used to exist citing terms like “usury” because the loans were given with the purpose that they could never realistically get repaid. But the terms and interest rates that were once illegal are now commonplace, and people are hurting because of it.

So who exactly is going to stand up for students and all the artists, curatorial studies majors, industrial design majors, creative writing majors, art history majors — and even the art schools, which are also caught in the financial spider web? Well, so far it looks like hardly anybody. Here’s the best going on so far: 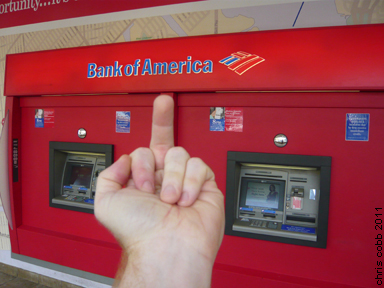 1) Over 50,000 people have signed a petition asking Congress to pass student loan forgiveness legislation. You can sign it here.

3) Some media outlets like the Huffingtonpost.com are starting to look at the issue; “Majoring in Debt” is one of its series about the problems students are encountering.

4) Illegal practices by financial institutions are starting to be brought to light by journalists and class action suits. In 2007 when then-Attorney General of New York Andrew Cuomo investigated several major financial companies that profited from student loans, his investigators found:

It’s a neat trick that the financial industry has performed, but the net effect is a huge creative brain drain (as Glen Helfand noted in an earlier post). Don’t get me wrong — we need banks, and financial companies have every right to make money, but their predatory behavior destroys careers and, in some cases, lives — and that is what I object to.

A general lack of support is bad enough, but then to have countless artists driven away from what they went to school for, it’s kind of tragic. Imagine if all the medical students did not become doctors but instead became waiters. Imagine if all the police academy graduates had to wash dishes or perform office work to pay off their student loans. We’d have no more doctors and no more cops. Likewise most artists end up in fields that pay the rent but that they feel no passion for. Fortunately for the student loan companies, by not making art, their borrowers can afford make their student loan payments. Even if it takes 30 years.