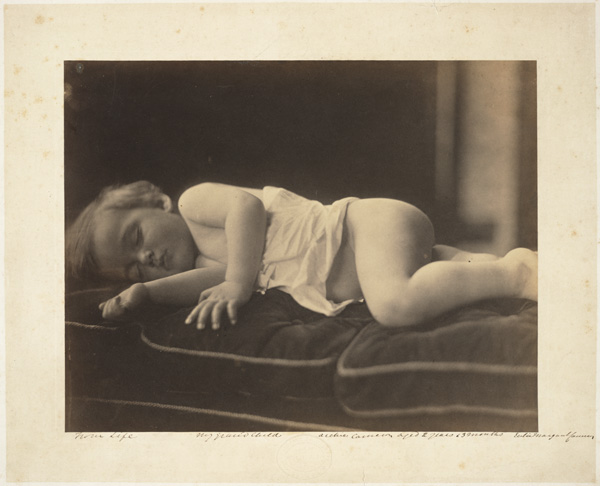 I think Julia Margaret Cameron understood that a photograph cannot present a clear distinction between a sleeping child and a dead one. In a photograph there is no motion to indicate breath: no warm arm to touch, no murmur or cry. The connection of an infant to its own life is barely established, and for most of human history, tenuous.

A sleeping infant is a sign that the maternal gaze is always attempting to decode. That a baby is born is no guarantee that a baby lives. That a baby sleeps is no guarantee that it will wake, or that it will not wake. For Cameron, that some of her children and grandchildren would die, and did die, was a matter of fact. That the British children in India, where she lived, would die at twice the rate of those in England was another matter of fact; that the ones who did survive would leave their families for Europe early in childhood and not return to their parents until grown was yet another, difficult one.

If you knew nothing of Julia Margaret Cameron’s work, and nothing of this context, you might look at that single photograph of the sleeping toddler, and look also at the title of the photograph, and imagine that Cameron sought to take some early version of a snapshot. This is and could be a sweet portrait — a grandmother’s memento. But My Grandchild, Archie Cameron, Aged Two Years, Three Months is not the only photograph that Cameron took of her grandson. In a similar photograph — The Shadow of the Cross — Archie is in much the same pose as the first, his lips in a pout, looking still like a golden-haired, curly boy. He holds a cross in his hand, and a young woman in a mourning dress bends over him. In another photograph — Devotion — the same young woman hovers, in a different black veil, this time with her face only inches from the sleeping infant, her eyes full and intense, his hand empty. Death, here, is context.

Looking cannot always help a mother distinguish between a sleeping child and a dead one, and no watch, no matter how passionate, can keep the dying alive. For a person who is a mother to an infant, the watch is the work. Rather, it is a work that is a kind of extension of the mother herself, her own body in the state of attention as she scrutinizes the child’s body, inspects it for health, keeps watch at its side if it suffers, takes notice of when it requires comfort. The maternal gaze encompasses both an almost erotic desire for possession and a simultaneous desire for that which might, in this context, be at odds with possession: the child’s survival. A photograph of a sleeping baby can be a photograph of many things. To keep is not the same thing as to keep alive.

Neither the inspecting eye of a mother nor a camera can, despite their attempts, fix the state of the infant. As life or death is not certain in a photo of a sleeping child, so it is that photos themselves — at least as documents of something like reality — are not certain. Although there is no doctoring of the image of the lone sleeping boy, the other two photos of Archie were manipulated by Cameron. No motherly figure actually looked down at the sleeping or playing-dead Archie during a photo shoot — not in mourning, not in devotion. Archie slept; Cameron took a photo. Later, she took separate photos of the veiled model, Mary Hillier, and superimposed these images to suggest a maternal relation to Archie.

This is Cameron’s fiction that the sleeping infant is a dead infant or a dying infant and that the gaze of the woman who watches him is the maternal gaze. What Cameron photographed, primarily, was not any kind of public reality, but instead, a kind of hyper-private, luminous world, framed in allegory, drawing from the form of the tableau vivant. Women and children were at her world’s center, and they were the stuff of life, death, desire, and beauty — fully heroic — while the men, except for the poets or poet-like geniuses, existed in the periphery. Everything is figure; almost nothing is ground. All action is affectionate relation — round lips kissing, large eyes staring, tender bodies pressing. Domestic interiors were almost nowhere to be seen, occluded by her subjects. The mother’s gaze at her infant, a child’s body pressed against her siblings, a poet’s beard: these were the dominant subjects in a world at the center of which was mostly women’s love.

I think it is no mistake that the photograph of Archie Cameron — at first sight, resembling what has become a familiar kind of photo — is an artifact of a moment in a process of technological breach with the perceived world. How rare to find in art the grim, beautiful intensity that is the life of women and children, their mixed-up-in-life-and-deathness, the ambiguities and desires, even, of their sleep.

Anne Boyer is the author of a number of works of poetry and the forthcoming novel JOAN. She is an assistant professor of liberal arts at the Kansas City Art Institute.

Tags: aboyer, Anne Boyer, Julia Margaret Cameron, One on One