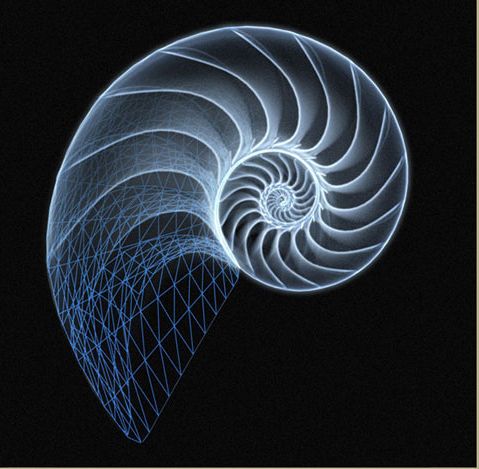 The windmill of your mind: an image of a shell generated through recursion.

Recursion is the phenomenon of an algorithmic function referring to itself within its execution. For example, if I were writing an algorithm that was to continue running until the value of x, which presently equals 10, attained the value of 0 and named this function subtract1UntilZero, I would call subtract1UntilZero — which subtracts one from x — from within the function itself until x equaled 0. Recursion can occur on linguistic levels (a common joke about recursion is the dictionary entry that says, “Recursion (n.), See, recursion“); it can also (and quite often does) occur in nature, such as in the shape of a sea shell, where the same pattern is repeated, though slightly more minimal, from the outside of the shell to the inside. The once ubiquitous visualizations of the Mandelbrot set might be the most iconic images of the process. Artists as varied as Robert Smithson, Alvin Lucier (in “I Am Sitting in a Room”), and Vito Acconci have played with various elements of recursion in their works.

My tagline for literary works that employ high degrees of recursion, or recursive-like structures, is “how solipsistic?” since my sense is that truly recursive linguistic practice nearly entirely decimates any of the common expressive characteristics of language — there is no possibility of a lyric “I,” no fiction of witness, no documentary content, no pretense to the poem being somehow a charting of the play of the mind (as poets such as Robert Creeley and John Ashbery have described their practice), no politics, etc. One could say that a recursive poem is pure structure, but that structure would be quite meaningless if the poem did not have some qualities that we associate with normative signification.

One needs the hints of signification — the sense of a story, the sense of a lyrical investment — to make this structure visible; one simply can’t gauge the integrity of the structure without some space for the contingencies of human perception. For example, one could take the word lists that Christian Bök created to write Eunoia and construct countless abstract, formless poems with interesting surfaces, relying on the novelty of the lists themselves to create interest, but it is Bök’s attention to story, comedy, English prose style, and idiosyncratic rhetorical structures which make the book work as more than an avant-garde curio. It is also, as I suggested in my last post, exhaustive, and to that degree represents a dictionary, albeit curiously ordered, of all univocalic words in the English language as we know it today. 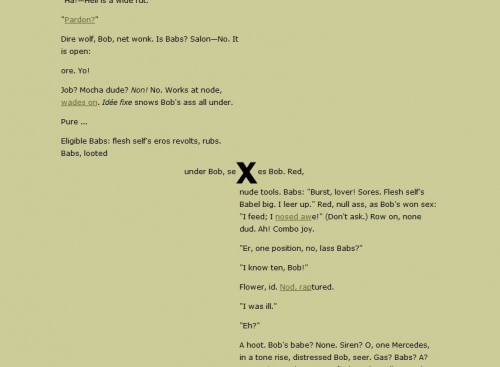 The ultimate recursive work that I know of is called “2002: A Palindrome Story” by Nick Montfort and William Gillespie. A palindrome is one of those wacky sentences that can be read forwards and backwards — a famous one (which also happens to be univocular) is “A man, a plan, a canal: Panama.” “2002: A Palindrome Story” is 2,002 words long, with the middle letter and turning point being an x, and was written with the aid of a computer palindrome tester created by the authors themselves. While it is not the easiest read — though it has characters, and uses normative syntax when possible, it is terribly elliptical — it has a rich surface that is enhanced, at least conceptually, by the integrity of the execution. Montfort is also the creator of “ppg256,” which I mentioned earlier, which typifies the recursive idea as it is a program that continually re-executes itself, pulling out unique content with each iteration of its 256 characters — what haiku has ever done that?

A touchstone for this type of work is the group the Oulipo (Ouvroir de littérature potentielle), which was composed of both writers and mathematicians, and which sought through elaborate “constraints” — limitations on what you were permitted to do in your writing — to abolish certain forms of creativity in writing (“self-expression,” for example, in its purely Romantic sense of being a spontaneous outpouring of emotion). In some ways, they were a reaction against Surrealist writing practices, which advocated “automatic” writing, completely untethered from the self-consciousness that would censure content or image associations so that one’s writing became a map of one’s subconscious — the world of dreams. “Chance,” of course, would be the main objective of Surrealist writing; the Oulipo sought to abolish chance, or rather, by constraining their writing — not permitting the use of the letter e for example — create a field in which new forms of chance could occur. Famous writers of the Oulipo include Georges Perec, Italo Calvino (whose novel If on a winter’s night… both exhibits and theorizes recursion), Raymond Queneau, and Harry Mathews. Christian Bök’s Eunoia, mentioned earlier, is inspired by the Oulipian example, though comes even closer to a purely “recursive” work due to the overlaying of several ancillary constraints (described in his afterward to the work, “The New Ennui“).

I’d like to point to a different point of origin, which is that of durational (and privational) performance art, those that create intricate situations in which the performers are forced to live. Tehching (Sam) Hsieh, referred to as a “master” by Marina Abramović, created a series of such pieces, most of them lasting an entire year. For his Cage Piece, he lived inside an 11’6″ × 9′ × 8′ wooden cage with minimal amenities, and did not allow himself to read, write, talk, listen to the radio, or watch TV (the event was officially “notarized” by a lawyer and was open to viewing once a month). In Outdoor Piece, Hsieh lived outdoors for a year in New York, not permitting himself shelter of any nature; for Rope Piece, he remained tethered with an 8-foot rope to artist Linda Montano for a year, neither permitted to touch the other. My favorite is the Time Clock Piece, for which he had to punch a time clock every hour, day and night, and photographed himself each time. The 6-minute film which resulted shows him starting with a shaved head and ending the year with a healthy black mane. The appeal of this last project to the internet age can be seen in such YouTube videos as “Noah takes a photo of himself every day for 6 years,” but whereas Hsieh’s seems “political” to the degree that it mimics the solitary confinement of prisoners to the extreme working conditions of the very poor, the Noah piece seems testament to the fact that we all carry portable cameras these days, and seem to have little enough on our minds to remember to snap ourselves once a day. These pieces allow us to view the intersection of organic, bodily time with that of the clock, that mystifying technology that we grant more “truth” value than we do even a photograph (even a stopped watch is correct twice a day).

Another extreme performance artist who often played with themes of duration is Vito Acconci, who was most known as a poet prior to the video and performance work (not to mention architecture) for which he is best known. An early piece of his, seen below, is a text that literally describes itself, returning again and again to its very physical presence for renewed, if extremely limited, content. This work, in turn, inspired a series of works by Craig Dworkin (who, in fact, edited an edition of Acconci’s early writings, Language to Cover a Page) called “Fact,” each element of which describes the physical and chemical components of the material on which the poem is printed or being projected (though, perhaps not unreasonably due to variance in monitors, the online version describes the page of Poetry magazine in which it first appeared). A final example would be Brion Gysin’s “permutational poems,” such as “I am that I am,” which exhausts all the variations in word order using these five words, which subjects the reader to all sorts of unusual challenges — to inject tone to sustain energy — to perform it. 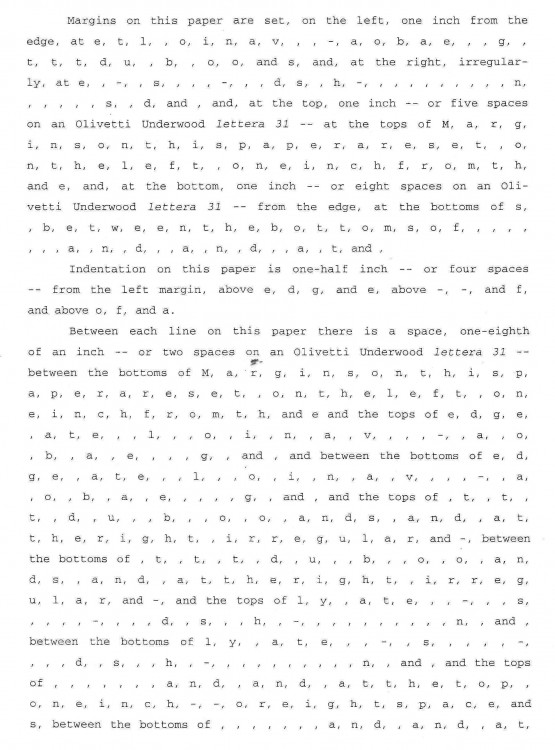