When I teach or try to describe what “electronic literature” is, I often include works that are not produced by, or necessarily intended to be read on, computers. Artist/critic Stephanie Strickland, an accomplished poet and artist known for works such as “V: vniverse” and “slippingglimpse,” begins her short essay “Born Digital” with the statement, “E-poetry relies on code for its creation, preservation, and display: there is no way to experience a work of e-literature unless a computer is running it — reading it and perhaps also generating it.” This seems to preclude the possibility of digital culture making any impact on what is known as “print culture,” which is unfortunate since digital culture — the play of algorithms, the “symbolic form” of the database, the ubiquitous network, etc. — has led to the creation of new genres of literature, new forms of bookmaking and text production, that are otherwise critically stranded (not able to be adequately described) without recourse to the facts of new media.

I would even argue that most of these print works I am thinking of constitute a more profound, and even sublime, response to the rise of the digital than many works of electronic literature. Just because something is text and can only be experienced on a computer screen does not make it representative of a paradigm-shift in reading; reinscribing the presumed “modernist break” with the space between print and screen ignores the very lively negotiations that occur in this DMZ.

“Bembo’s Zoo,” which I’ve written about earlier, and Alison Clifford’s “The Sweet Old Etcetera,” a successful (to my mind, where many have failed) setting of e. e. cummings’s poems to a digital setting — suggesting an analogy with how a composer sets words to music — and the internet sensation “What Does Marcellus Wallace Look Like?” are all examples of the negotiations of the analog and digital. None of these works can be said to be “born digital,” nor are they works that rely on books for their presentation — they are mongrels, but their success forces one to create, provisionally, new genres to accommodate them. 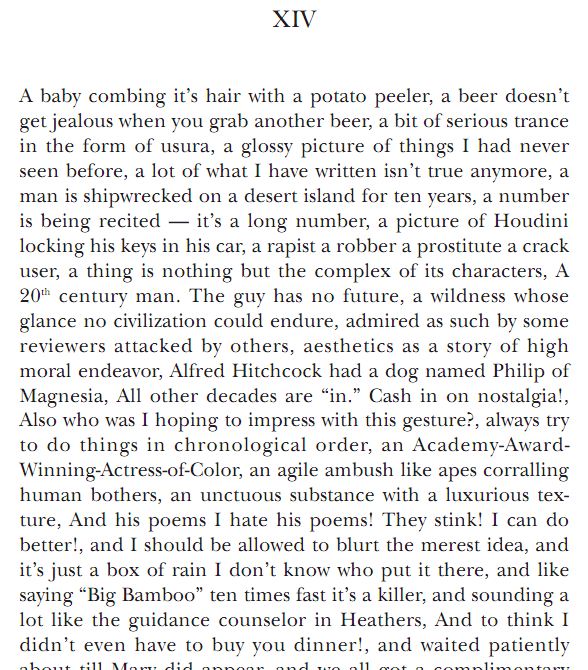 But the “comedy of exhaustion” — or, alternately, the “comedy of excess” — is something else entirely. The excess is in the way these works completely exceed stylistic norms associated with book culture, not to mention the “author function” as it’s commonly understood — the writer as sole creator of new thoughts, new formulations, as “original” genius. They also exceed norms of taste — the best of them are the outcomes of procedures that cross over into vulgarity and otherwise taboo subject matter, tripping the line of censorship that has most famously been savaged by Wikileaks (and a growing number of indiscreet male politicians). Finally, they exceed norms of attention — very few of them are intended to be read through in their entirety, but randomly accessed as one would a dictionary. These works are often created by following through on a basic physical algorithm — do this, again and again, for several days, weeks, or months, and the book will be written, you don’t even have to pay attention — and to this end they are often referred to as works of “conceptual writing.”

Best known among conceptual writers is Kenneth Goldsmith, whose resume far exceeds what I am able to include here due to word count; he is the creator of ubu.com, a radio personality at WFMU in New York, a part-time professor at the University of Pennsylvania, and otherwise the most public theorist of this new art. Works of his, such as “No. 111” (above), for which he collected phrases that ended in the schwa sound for several years and organized them by syllable count; “Soliloquy,” for which he recorded everything he said for a week on a tape recorder and published it (the project was accompanied by a gallery show in which he pasted the pages to the walls, losing many friends at the opening); and “Fidget,” for which, on Bloomsday, he recorded as best he could every movement his body made for the entire day, have become as close to canonical as this relatively new (but well past its honeymoon period) genre of writing has. “Uncreative writing” and the “unboring boring” are two of his coinages; he bases his understanding of conceptual writing in his love of Andy Warhol (particularly A: a novel), John Cage, Vito Acconci, Samuel Beckett (particularly the later works), and other artist/writers who don’t find a comfortable place in the preexisting genres.

Fiona Banner’s “The Nam,” which includes her verbal, moment-by-moment (as if she were there) recounting of six movies set in the Vietnam War, could be said to be a precursor text to conceptual writing, as can the aforementioned A: a novel, which was merely a transcription of a slew of recordings by Warhol superstar Ondine. Countless conceptual artists can count as precursors, as could the Mexican book artist Ulises Carrión, whose “The New Art of Making Books” is a manifesto for malnourished books. The prose poems of Dan Farrell collected in Last Instance, as well as his book-length The Inkblot Record, which is basically a collection of responses to Rorschach images collected in old psychology textbooks, also predate birth of the “conceptual literature” idea by a few years. These works differ from other forms of experimental poetry, even those engaging in high parataxis (list form), such as the collection of questions that comprise Ron Silliman’s “Sunset Debris,” in that the author becomes something of the abject transcriber of events to which they are largely indifferent, not to mention entirely inadequate to catalog, like a stenographer in a tennis match. 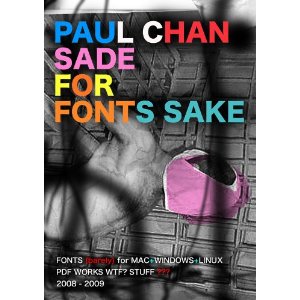 Other writers include Craig Dworkin, who co-edited Against Expression, the first anthology of conceptual writing; Vanessa Place; Robert Fitterman; Simon Morris; Mathew Timmons; and Darren Wershler. I tend to think of Paul Chan as a conceptual writer of sorts, particularly in his Alternumerics fonts and the books he has published using them, particularly having to do with rewriting the Marquis de Sade. Sade himself might be the muse of this “comedy of excess,” as his works typify a sort of unbridled “revolutionary” energy that could not find its way into normative channels but which produced doorstop-size books that included every permutation of the sexual act — the last redoubt of the “visionary” as Susan Sontag claims in “The Pornographic Imagination.”

Christian Bök’s poem “Eunoia” might best typify the “comedy of exhaustion” alluded to above: it is composed of five chapters, each a narrative, and each of which limits itself to words that use one of the five (and no other) vowels — the “a” chapter being composed of words such as banana, abracadabra, Hassan — and whatever verb and verb tenses can be utilized with such a constraint. One of the other ancillary constraints (which was unfulfilled) was that he had to use all of the univocular words available in English, thus testing both the writer and the procedure’s potential to accommodate as much of the material available as created, unwittingly, by English language culture over the centuries — a literary “experiment” with a pedigree in science.