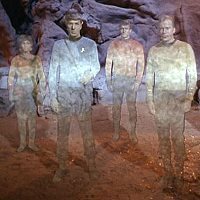 My seventh comedy ties into many of the tropes common to new media discourse. Most prevalent among them might be the loss of the “aura” — that which obtains around an object of religious veneration, in Walter Benjamin’s original formulation, partly because only the elite were allowed to be in its presence — in the digital object, which has no true physical original. A “duplicate” of a digital original is not a simulacrum or representation of the original but the original itself brought, by magic of transporter beam, into your very computer (though unlike with Kirk, an original is also left behind). I have a half-dozen programs on my laptop that no longer appear on the web (due to legal issues or just plain scruples); in time, these might be the last remaining copies of these programs — all, in fact, originals.

The other major trope would be that of network distribution, which allows an artist to create a series and have its duplicate appear on countless other computers around the globe. In Lawrence Lessig’s Free Culture, he outlines the progression of messages from those singular things carried, on parchment, by couriers across great distances (messages which, of course, might warrant the assassination of the courier himself), to messages conveyed by the broadcast model, sent from towers to numberless receivers who, nonetheless, have to be within proximity of the tower, to the present model of networked distribution. Networked distribution is characterized by the duplicates described above, but is also notable for the receiver of the message also being a broadcaster — we can “talk back” to our TVs now (in the form of YouTube comments, for examples, or even mash-ups of other videos), and rebroadcast messages on our own special channels. Of course, we could always send mail and make and show videos, but it’s the rare sender of letters who has acquired the immediate stardom of, say, lonelygirl15 or Shit My Dad Says. 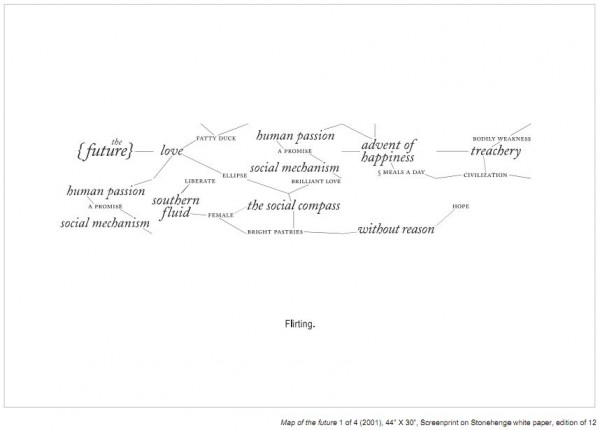 The artist Paul Chan, whom I mentioned earlier in the context of conceptual writing, has utilized the network in projects ranging from straightforward political activism to his more esoteric investigations in forging a culture of carnivalesque spontaneous creativity, a program based on his synthesis of ideas of Charles Fourier, the Marquis de Sade, and various other strands of libertine libertarianism. He came to the attention of the art world with his long video Happiness (Finally) after 35,000 Years of Civilization — after Henry Darger and Charles Fourier, which depicted Darger’s Vivian Girls in a prismatic landscape doing all the things that the Vivian Girls do — running away from the baddies, having sex, eating and shitting, and just lying around. He is the one artist I associate with font-art, which is the creation of typefaces that are often themselves composed of words. His “pron” typefaces, which are directly influenced by de Sade, allow you to rewrite texts of Gertrude Stein, for example, as if they were a very crude, repetitive form of porn. A more humanistic venture might be the “Self-Portrait as a Font,” which is composed of phrases Chan says in conversation, which can find a analog in Goldsmith’s Soliloquy, which is entirely composed of things he actually did say. The apogee of Chan’s network activist work might be the posters he created of life in Iraq (which he visited in the months before the invasion), and made available for distribution on the web for postering anywhere. 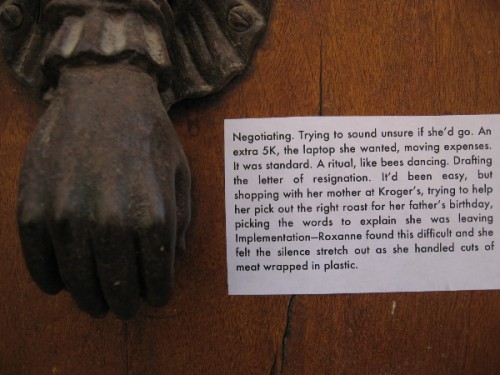 A similar work is Nick Montfort and Scott Rettberg’s “Implementation,” a “novel in stickers” which they posted to the web in blocks formatted for Avery 5199-F size label, which is two columns of five stickers each (used to label video tapes). “A novel about psychological warfare, American imperialism, sex, terror, identity, and the idea of place,” the website allowed users to upload photographs of their labels in situ; about 1,600 photographs came in from places around the globe (though, not surprisingly, most came from the U.S. Northeast). Novelist Shelley Jackson’s Skin: A Mortal Work of Art alters this polarity, moving from text to flesh to photograph. For the project, she allowed visitors to her website to claim individual words in a short story she had written, which they would then have to have tattooed to their body, photographed and sent back to Jackson. The project appears to be stalled; she’s received 1,449 of the 2,095 words in the story.

A little appreciated aspect of Young-Hae Chang Industries internet texts is that they often appear in several different languages, none of them claiming to be the “original” text of which the others are translations. Their piece “Samsung,” for example, has versions in English, Korean, French, German, Spanish, as well as a “Tango” version (also in English). While most of their works have English versions, and some appear only in English, we are never explicitly given the impression that the versions in Korean (which Young-Hae Chang might very well have written) and German or Portuguese (which one assumed benefited from some help) are “secondary.” They all have the authority of the original in much the same way Beckett’s Waiting for Godot is an original (no one will ever, of course, make their own translation of En attendant Godot). This further unlinks these texts, emanating from Seoul, Korea, to geographic and cultural specificities; likewise, it makes any sort of true intertextual reading of the texts — in which one relates the textual events in the object work to works in other literature of that language — since that would require reading across the literatures of nearly a dozen world languages (including Turkish, Swedish, Russian, and Galician, spoken only in northwestern Spain).

These projects are often merely allegories for the properties of digital technology described above; the duplication of stickers from a novel in another part of the world, or the duplications of “originals” in different languages, are not the same thing as the repetition of a string of bits. The most famous photographic allegory of this property is probably Wendy McMurdo’s “Helen, Backstage, Merlin Theatre,” though some artists like Anthony Goicolea have based a body of work on the principle. The poet Charles Bernstein’s ’90s visual essay “An Mosaic for a Convergence” theorizes the implications for poetry of this utter separation of language from the singular body and material page, and effectively uses cut-and-paste graphics and neon scribbles to drive the point home. 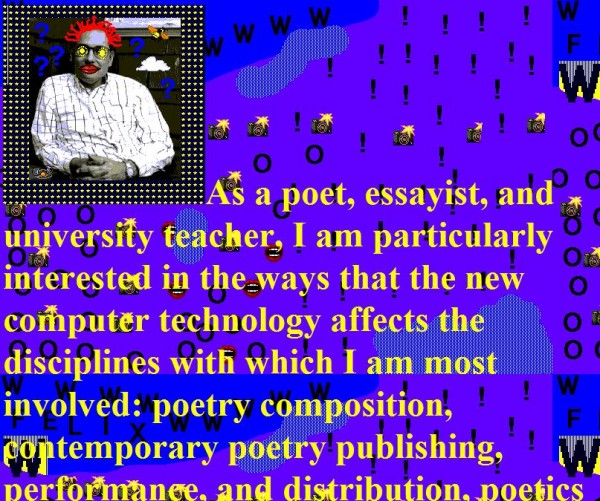 “An Mosaic for a Convergence” by Charles Bernstein