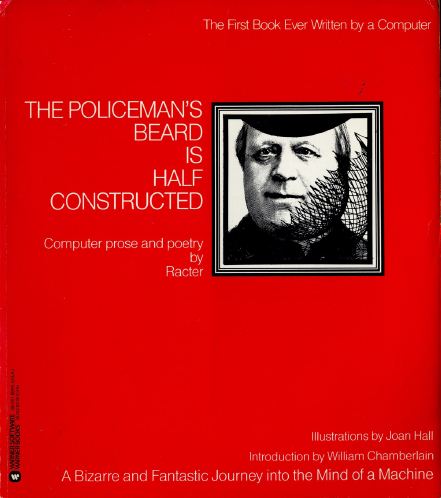 This next comedy might be the one most associated with electronic literature, as it corrals work in both hypertext and computer-generated writing. I describe hypertext a bit in the first blog post in this series; it is basically the association of different text blocks, called “lexia,” through links embedded in the text itself, commonplace on the web but still exotic in the 1990s. Important early works in hypertext include Shelley Jackson’s “Patchwork Girl” (1995), Stuart Moulthrop’s “Victory Garden” (1995), and Michael Joyce’s “afternoon: a story,” often considered the founding text of “serious hypertext,” first published in 1990. Computer-generated writing has also been touched on; Noah Wardrip Fruin’s “Regime Change,” for example, links texts together via algorithms which attempt (but often fail) to create meaningful, syntactically sound sentences out of a corpus of preexisting sentences.

The comedy of association might have been born out of a brief statement in Isidore Ducasse’s (the Comte de Lautréamont) proto-surrealist novel Les Chants de Maldoror, in which he describes a young boy as being “beautiful as the chance meeting on a dissecting-table of a sewing-machine and an umbrella.” This seemingly irrational juxtaposition opens up a deep chasm in signification: umbrellas and sewing-machines might be classed as rather trivial everyday objects, but the dissecting table, with its notions of torture, death, not to mention the Enlightenment quest for knowledge, render the sewing machine malevolent — think of the machine in Kafka’s In the Penal Colony that imprints the judicial sentences of offenders into their bodies — relocating the umbrella as the third, stray term (though umbrellas, too, have been known to kill). These orchestrations of chance in the service of demonic (often pointedly anti-bourgeois) humor would become a major property of surrealist writing and art.

An early collection of computer-generated writing is “The Policeman’s Beard is Half-Constructed,” created by a simple 64k program written by William Chamberlain and Thomas Elter. Like with Surrealism, the impact of these charming poems is often based on chance juxtapositions, with the addition of every poem being associated with an “I” that is ghostly, irreverent, charming but menacing. The Surrealism can actually be quite subtle; some of the poems resemble haiku as if written by the Brothers Quay: “Cut a face, cut a visage / Remake appearances to blend / The sky with earth / Then will little people fall.” Christian Bök writes in “The Piecemeal Bard Is Deconstructed: Notes Towards a Robotpoetics,” that “‘The Policeman’s Beard Is Half-Constructed’ is … an obit for classic poets … an untimely synopsis of their own demise …” Arguing that Racter represents the first step for computers of writing poetry for their own (and not human) consumption, he states that in ignoring this book, “we might unwittingly miss a chance to study firsthand the babytalk of an embryonic sentience, struggling abortively to awaken from its own phylum of oblivion.” 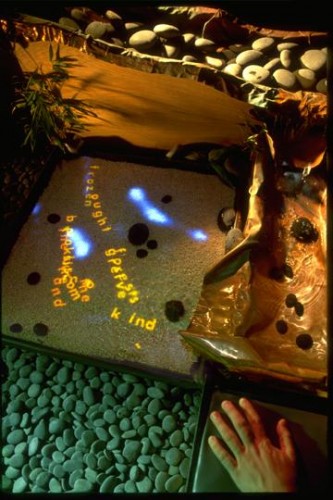 Some works that play on this comedy don’t necessarily aspire to surrealistic effects. An installation piece by David Small and Tom White called “Stream of Consciousness: An Interactive Poetic Garden” is composed of an artificial stream covering a 6×6-foot area; projected on the stream are words which appear to be floating down the stream itself, slowing at turns around rocks, speeding when flowing over a fall, etc. The user can interact with the words by moving a beam of light through the water, thus getting them to sprout new words with which they are associated. In the most mundane version (it works with different algorithms and data sets), these new words are often merely synonyms of the original words, and so the piece seems little more than a concrete version of the Visual Thesaurus. A really effective application of this engineering feat would be to sharpen the associations, if not to make them “surreal,” at least to give them some literary bite. This is a particular problem with some literary electronic works: they solve problems of mechanical and computer engineering and only later engage with the semantic and syntactic properties of language, not to mention aesthetic and political dimensions.

Automated poetry generators like “Get a Google Poem” (no longer functioning) played on the comedy of association by creating new texts in classic poetic forms — the sestina, the sonnet, etc. — based on Google search strings. The functionality of this software operated on an early version of Google’s search algorithm which weighted pages largely by how many other pages linked to them; links embedded in text created by a blog writer, for example, as I have done several times in this series, either to inform or entertain, became the etiolated human input of a largely automated creation. The movement of Google toward a more commercial ranking has largely corrupted these procedures, as the authored associations of a gazillion writers have been replaced by sales rankings. 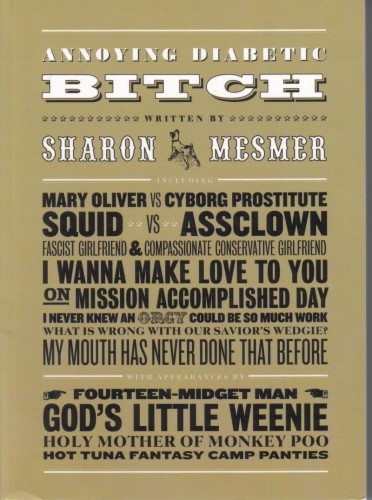 Nonetheless, a whole league of poets united under the name of “Flarf” has taken the rapid (and often vapid) juxtapositions inherent in a Google search and learned how to craft funny, often wildly satiric, poems out of the results. Known as “Google sculpting,” the basic practice involves collecting large chunks of text based on text searches — bland ones like “dear head,” or loaded ones like “chicks love war” — and culling from the results resonant, often decidedly “unpoetic” texts, and arranging them into episodes of sonic Rabelaisean humor. Writers associated with Flarf include Gary Sullivan (the founder of the listserv where these poets first posted their work), Michael Magee (author of My Angie Dickinson, a series in [Emily] Dickensian quatrains in honor of the movie star), Drew Gardner (author of the “Chick Loves War” poem, which has become something of an anthem), K. Silem Mohammad (author of Deer Head Nation), and Sharon Mesmer, whose book Annoying Diabetic Bitch is considered by the renowned Mexican poet and critic Roman Lujan the masterpiece of the movement.

Ultimately, the challenge in the “comedy of association” is in making sure these links — whether those connecting lexia, as in a classic hypertext, or those embedded in the cut-and-paste techniques of a computer or Flarf poet — are as engaging and precise as those in the original formulation of Lautréamont. Michael Joyce’s “afternoon: a story” is among the most economical and varied examples of how to manipulate links and lexia: some lexia can be as brief as a few sentences, some more involved, and he handles the issue of how to keep the reader engaged in a nonlinear, wandering narrative by pulling from Alain Robbe-Grillet’s bag of tricks: start with a death, leave the narrator cold and inscrutable, and maintain a clear, refined eye in visual description. “afternoon” is also a textbook for the use of seductive links, the best ones operating in a way that creates a refracted, rather than “nonlinear,” relationship between lexia. The story itself revolves around a host of figures and perspectives, expertly linked through engaging motifs, suggesting a relationship to any number of curiously shaped narratives from La Ronde to Rashomon. In this way, Joyce’s links become seductive rather than merely invitations to wander; the linking words themselves can be seen as a caption for the following lexia, obtaining a text-to-image relationship.