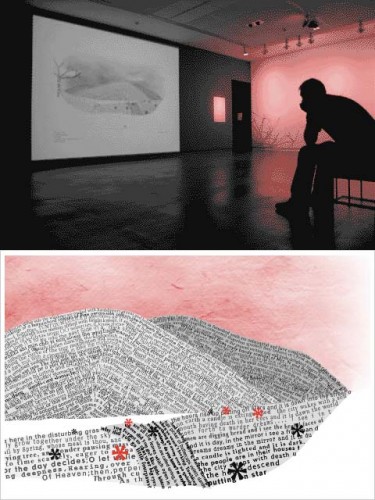 Alisson Clifford first came to my attention through her digital setting of a sequence of e. e. cummings’s poetry, a marvelous Flash piece called “The Sweet Old Et Cetera.” Especially impressive was how she managed to preserve the kinetic aspect that the poems themselves already had as still images; cummings’s poem “r-p-o-p-h-e-s-s-a-g-r,” for example, guides the reader’s eye in a very unconventional way for a poem, forcing one to animate mentally the construction of the word “grasshopper” from the mélange of letters in its first lines. The poem seems to allude to Muybridge’s famous sequence of photographs of a horse running (to test whether, indeed, it ever completely leaves the ground, something Gericault got kinda wrong); we see the grasshopper coil into a shape that one doesn’t recognize, glide through the air in what can only be called grasshopper stealth mode, and then land, assuming the conventional, iconic shape of a grasshopper — or “grasshopper,” the word itself. The movement of the letters in Clifford’s piece are nearly balletic — she is incredibly attentive to the smallest details of placement, speed, easing, and fades of the figures — and the modest amounts of interaction keep the game alive of the viewer. An earlier piece of hers, the much simpler “Silhouette: A Dance,” a collaboration with the poet Addie Tsai, makes the link to physical movement explicit in its title; once again, the piece seems to aspire to quietness, in a way that nearly wants to deny the digital context and reach a meditative zone (not unlike the very popular iPhone “game,” Zen Bound).

Her new series, “Interstitial Articulations,” doesn’t at first seem to have much to do with language. These video works might more accurately be described as “visual music,” a genre which, like “electronic literature,” is saddled by an unsexy, largely imprecise name, and which is mostly supported by the activities of passionate coteries of creators and critics. “Visual music” pieces are, like “synaesthetic” video games, often colorful, abstract or near-abstract, digital paintings, often accompanied by soundtracks that are highly repetitive and absorptive, transforming the geometric spaces depicted into evocative, dimensional landscapes. 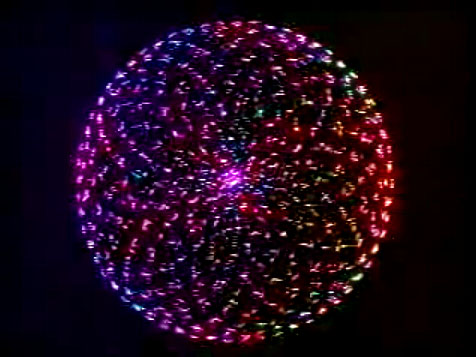 An early master of the genre was John Whitney, who was also one of the first filmmakers to experiment with digital graphics (using a converted M-5 Antiaircraft Gun Director). Works like “Arabesque” and “Permutations,” often accompanied by music he composed evoking Native American meditative themes, can seem disciplined, even pious, in their adherence to mandala-like structures and kaleidoscopic symmetries. Old-fashioned as the technology might seem — this is basically the technology used to animate the plans for the Death Star — these are powerful films, and seem even fresher today, much like analog synth might be to the ear tired of ubiquitous digital manipulations. Other early pioneers include John’s brother and collaborator James Whitney, Larry Cuba (who, coincidentally, created the Death Star animations), Adam Beckett (who also worked on Star Wars), and the animators Oskar Fischinger and Harry Smith (better known for his Anthology of American Folk Music), among many others. IotaCenter and the Center for Visual Music, both in Los Angeles, are places to go to find out more.

Clifford’s new pieces manipulate light structures that exist as afterimages, like the shape Picasso famously carved in the air with a flashlight, as if they were physical objects. Her latest piece, a collaboration with composer Graeme Truslove, is what she described in an email to me as “narrative” fly-through of one of these sculptures, imagining a journey in spaces occupied entirely by light. One might also compare her beautiful shapes to the shape of abstract glyphs; they can resemble, at times, the visual language Diana Slatterly created for digital science-fiction opus Glide, or the verbo-visual language of Peter Cho’s “Takeluma,” in which letter-shapes are determined by digital visualizations of their sound patterns. They can also be seen as further articulations of the movement of shapes and letters she saw in the poetry of cummings. “Palimpsest” is consonant with her earlier text works in their search for the “interstitial” space between the otherwise ephemeral and nonmaterial — language and light — and the fixity of the physical world. 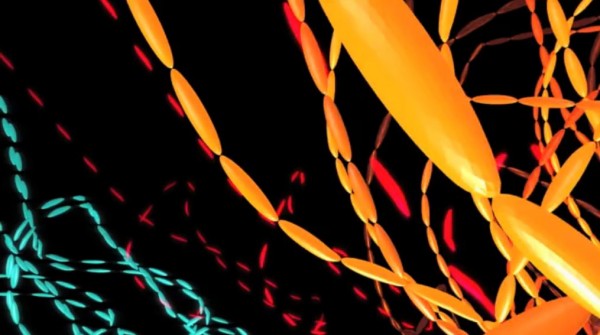 Alison Clifford is an artist working with new media based in Glasgow, Scotland. She is currently studying for a PhD (practice-based) at Glasgow School of Art. Prior to this she gained a master’s in digital art from the Audiovisual Institute of the University of Pompeu Fabra, Barcelona, and an MA (Hons) in English literature from the University of Edinburgh.

She has received a number of awards; in 1999 she received a Creative Scholarship from the PHONOS Foundation (Barcelona) for the production of “[citizen],” an interactive multimedia artwork created in collaboration with the Japanese composer Teruyoshi Kamiya. In 2005 she was awarded an Alt-W Production Award for “The Sweet Old Etcetera,” an interactive web project based on the poetry of e.e. cummings. The project was later nominated for a Bafta Scotland Award for interactive media in 2006.

She lectures in digital art at the University of the West of Scotland.