One of the most enjoyable aspects of curatorial practice is research, following thoughts to discover how random or apparently unrelated artworks that strike one’s interest can often have a literal or metaphorical connection. I am currently enjoying one such serendipitous occurrence which I thought I’d share.

I have followed San Francisco artist Sean McFarland’s art since he was in graduate school at CCA, where I teach. At that time he was engaged with the work of such artists as Thomas Demand and James Casebere, both noted for their photographs of cardboard models of office interiors and architectural spaces, respectively, that are utterly convincing as portrayals of the built world. McFarland had discovered a way to veritably flip the work of Demand and Casebere; he would take photographs of actual urban landscapes — houses covering the hills of San Francisco, in particular — and convince the eye that the images were of models. McFarland is now showing — at Yerba Buena Center for the Arts’s triennial regional survey, Bay Area Now Six — dark photographs of gardens and closeups of foresty areas, which he chooses to show in the dimmest possible light.

This creates a theatrical and moody environment that manipulates the viewer’s experience of the work in the direction of the eerie, uncanny, and sublime. They’re arguably the strongest works in the exhibition. What I’ve discovered is that McFarland has touched on a theme that was very important to painters in the area a hundred years ago.

At the museum where I am director, at UC Davis, I am showing a piece I came across from our permanent collection by the Italian-born American artist Giuseppe Cadenasso. Cadenasso was the head of the painting program at Mills College from 1902 until his death in 1918 — he was run over and killed by a car, just blocks from the current SFMOMA and Yerba Buena, at Powell and Post. Here is the piece: 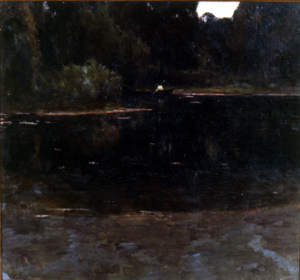 I believe Lake Aliso has been turned into a reservoir and is dry much of the year. However, a hundred years ago it was apparently quite a beautiful and romantic spot. A busy gallery visitor can easily overlook the painting, as at first glance it appears to be a mostly black abstraction, with some white and tan highlights. Close inspection reveals a lone boater disappearing into the reeds in the background of a pond at dusk.

One of the great things about working at a large university is the opportunity to get a free education from the faculty, especially the emeritus faculty that has the time to share its erudition. One of my favorites is Seymour Howard, one of the founders of the art and art history department at Davis. Now in his 80s, Howard and I have struck up a friendship since I arrived here in 2004. He loves to visit my shows and explain them to me from an academic point of view, which I eat up. When he recently saw the Cadenasso painting, he got very, very excited. Not only did he think it was a knockout [it really is quite wonderful — I just paused this writing to go take a look at its label and found a young undergraduate transfixed in front of it], but he exclaimed to me that the style was called a nocturne, and was highly influenced by Whistler!! Apparently there was quite a circle of these artists at the time in the Bay Area, including another artist of whom I was unaware, Jules Tavernier (who died young in Hawaii after founding the Volcano painters movement!). At that point my mind was whipping back and forth from 1866 London, where Whistler started his Hiroshige-inspired “moonlights,” as he called them, to the turn of the last century Bay Area and Cadenasso, to present day San Francisco and Sean McFarland.

A little research shows that nocturnes can be traced back to Rembrandt, but they really came into their own in France in the mid-nineteenth century, when the Barbizon school, inspired by Constable, moved nature studies from the background of historical paintings to the foreground in their work. JMW Turner was part of that scene, as was Corot, especially. And here’s the kicker, which made my day: our forgotten painting is by an all-but-forgotten Bay Area artist, Cadenasso, who was called in his lifetime, “the Corot of California.”