Five questions to SFMOMA artists, staff, or guests. Kalup Linzy is a video and performance artist, originally from Stuckey, Florida, now based in Brooklyn, New York. Kalup is performing this week in a new production of Gertrude Stein and Virgil Thomson’s opera Four Saints in Three Acts — a collaboration between the artist, composer Luciano Chessa, and contemporary opera organization Ensemble Parallèle. 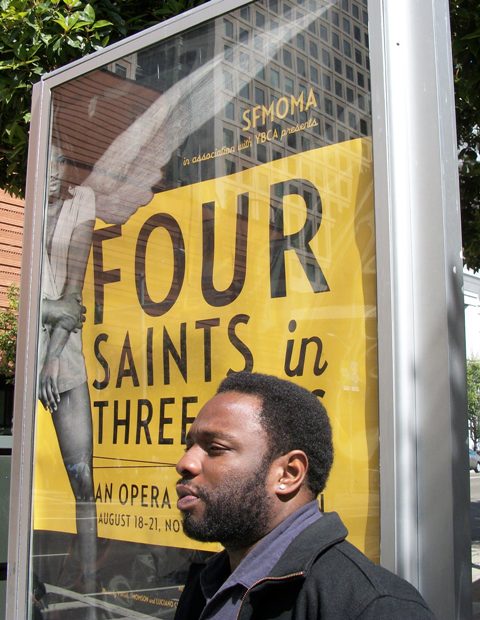 Kalup Linzy, in front of his likeness-as-saint for SFMOMA’s new production of Gertrude Stein and Virgil Thomson’s Four Saints in Three Acts.

I used to collect CDs, and now I don’t because everything is digital. I feel like I collect music. I know people don’t think of downloading music that way, but I used to buy a CD every Tuesday when I was in college. That was my thing to do, and I did that for five or six years. That and probably wigs for my characters. I wear my wigs over and over, but when a character in one of my videos wears a wig, I rarely give that wig to somebody else to wear. I put it away — it’s used, it’s done. In terms of things that I hold on to: music and wigs.

Agnes Nixon — she was mentored by Irna Phillips, who created the first soaps. Nixon later created All My Children and the character Erica Kane. I study soap operas, and Agnes was writing this thing in her house in Chicago and they were recording them on the radio and broadcasting them to the world. It was very guerrilla in the beginning. I would like to sit with someone who started something in their home and then it went to into the world and became something else. It would be a steak-and-potatoes powwow.

It depends what I’m working on. Normally I turn the TV off and turn on the music. When I’m watching TV — soap operas — I’m actually watching the soap opera. It doesn’t become background because I need to see everything. It depends on the mood and what type of music I’m working on. If I’m working on some Motown-inspired stuff I listen to a lot of Motown. If I’m thinking of ballads I’ll put on some Whitney Houston. I always have a mixture of playlists I pick and choose from. I have an ’80s “you must have heard it from my best friend/she’s always talking when she should be listening” mix and a “do you want to ride in my Mercedes, boy” mix, you know, the synthesizer-heavy stuff. I have my ’90s R&B girl groups, and I have the dubstep club dance music. When I was doing a lot of Katonya paintings in the studio, I was in a sad space, not like phoenix rising from the ashes, but “I’m in New York, I have this residency, I need to make work and boo hoo hoo” sometimes. That was a period when I was listening to a lot of gospel. The music goes with the mood, if I need to be uplifted or get into a particular space. Whitney seems to be an uplifter. Sometimes I’ll have that afternoon groove, on a Tuesday afternoon.

Can I say awareness? I always try to bring myself into a space where I become aware. I want to say prayer, but it’s almost like self-conversation. Can I say presence? When you become present, when you really become present, everything else disappears from the future and the past and you’re not worried, you’re not haunted, you’re just there. I always say that the best relationships you can have are when the people you have relationships with bring you to the present moment. Sometimes relationships don’t work out because you start triggering stuff in each other that may be bringing stuff up from the past, or in to some projected future, but if you stay in the moment then you’re just there. I would say presence and knowing, when things get a little crazy to say, “OK, get present.” It can take away fear. As artists, you’re putting yourself out there and sometimes we can over-think and over-worry. So I think presence is my best tool. I’m not going to say I always pull it off, because sometime I forget to pull out the tool. At the end of the day I know that awareness and presence are the key to being successful and having some peace.

I thought you were going to ask me to go into detail about the process of the production. It’s been a year and a half in the making — from early conversations in 2009 to me having meetings with SFMOMA in 2010 when I was doing a residency at the Headlands, a number of Skype conversations, some holdups getting the production approved, waiting for the various stakeholders to approve certain things. There were days of confusion around how I was going to pull together the video. I didn’t get everyone I wanted in the videos, but I’m pleased with what I got. And I’ve had some emotional ups and downs. The rehearsals are taking me back to when I was in theater in college, when you go through that process of feeling it’s really rough and you barely remember your lines and then the next thing you know you remember your lines and you get into the groove and then it just comes together. I’m looking forward to being creative and onstage, not just presenting the video, to performing. That’s what’s bringing me into the present. It’s giving me something to think about. I don’t sing opera, but hearing the singers sing will influence what I do in the future, because I’ll have had the new experience of working on an opera. And I’m bringing something I do, something that couldn’t have been done before, into something from the past. Everybody is approaching this in an avant-garde way — all these different approaches are coming together.

Working on the opera here has also let me see things I can benefit from and take from, and learn how to organize my own productions and go out there and raise the capital and put together the teams necessary to do larger productions. It’s given me a look at the infrastructure up close. I’m learning what you need to do in order to do things on a larger scale. When I did General Hospital I was just in my dressing room, and you just go into hair and you go into makeup, but here I’m watching how Frank [Smigiel, SFMOMA curator of public programs] is working every day, you can see Stella [Lochman, SFMOMA public programs assistant] there, you can see Michael there, the conductor, the choreographer, and I’m the video person and a performer, too. I remember Frank going through the different stages [of getting the production under way] — there were times when it was slow and then things picked up. It’s OK if it takes two years. We started talking in 2009. This will teach me patience.

Kalup Linzy performs in Gertude Stein and Virgil Thomson’s opera Four Saints in Three Acts this week. Highlighting the avant-garde energy at the heart of SFMOMA’s exhibition The Steins Collect and YBCA’s Bay Area Now 6, the opera serves as a lens through which to understand the vision, brilliance, and daring of the Steins’ collection during its time — featuring music by Luciano Chessa, with performances by Linzy and Ensemble Parallèle. Tickets available here. You can also view Linzy’s video work here. Artist and curator Margaret Tedesco interviewed Linzy, Chessa, and Smigiel on “KUSF in Exile” about the opera production, and it’s a great listen (starts at 50 mins. in).