Poets have played with the idea of absolute compression since the start of the tradition — epigrams and haiku are two of the oldest forms of poetry — yet it’s not until the 20th century that one sees this trend extend to poems of under, say, five or ten words. Apollinaire included a one-sentence poem (called a monostich) in his first collection, Alcools, entitled “Chantre” (1913): “Et l’unique cordeau des trompettes marines.” Fans of Ezra Pound, author of the famously brief “In a Station of the Metro,” will be familiar with the even briefer poem “Papyrus” (1916), inspired by the Sapphic fragments, which runs: “Spring… / Too long… / Gongula.” The Italian poet Giuseppe Ungaretti went a step further in 1931 with his two-word poem (not counting the elisions) whose brevity, coupled with a rich off-rhyme, only heightens the unspeakable ecstasy of his revelation: “M’illumino / d’immenso.” 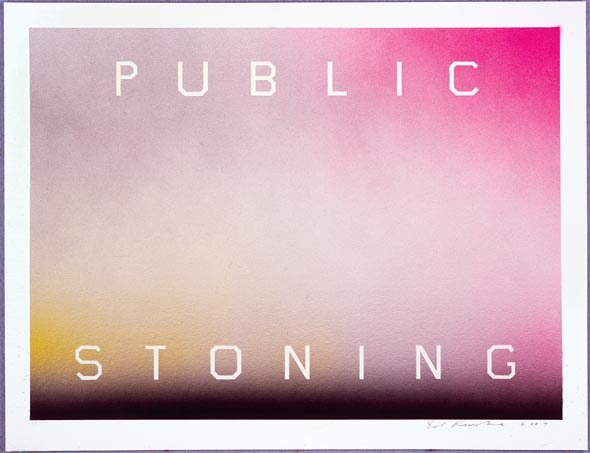 The first poet to my knowledge to be called a “minimalist” would be Aram Saroyan, who, along with Robert Creeley and Clark Coolidge, sought to reduce poems to the charges that single words could provide, either in isolation or, in Coolidge’s case in the works of books such as Space, in arresting spatial arrangements. Of course, concrete poets such as Eugene Gomringer and the Noigandres group were also exploring the divorce of the word from normative syntax and linear page space, but Saroyan is unique in having created a sizable body of one-word (and in some cases one-letter) poems. They aren’t much fun to quote — single word poems just get lost in the jumble of a sentence — but among the most famous are this and this. My personal favorite answers the burning question, if an employer has employees, what does a lobster have? The poet Elaine Equi agrees with me that the painter Ed Ruscha, many of whose paintings involve a richly burdensome presentation of single words or short phrases, can claim some membership — along with another writer/painter who was a master of the minimal, Joe Brainard — in this sub-tribe of poets.

But the Comedy of Reduction in the digital realm, where it is entirely divorced from the frame of the page and hence loses any sort of sculptural quality, has a different valence. (“The closer the look one takes at a word, the greater distance from which it looks back,” Karl Kraus wrote, but one wonders how much this sentiment carries over to words not composed of ink or paint, and hence not really there.) Part of this has to do with the digital text object’s dual membership in both the traditions of literature and engineering, the latter of which includes countless examples of absurdly reduced technologies — one need only think of the thumbnail-sized cell phones that have become a staple of comedy skits (themselves an echo of Maxwell Smart’s phone shoe). Programmers are always trying to do more with less, and so it seems quite natural that the more mischievous and dialectic of them would try to do less with more — writing several hundred lines of code for the presentation of a handful of glyphs.

Peter Cho’s Wordscapes and Letterscapes are series of single-word and letter pieces, respectively, which, in the manner of Ruscha, dress their contents in colorful, playful, and elaborate settings, but with the addition of modest, if often puzzling, interactivity. Quite often, the pieces subvert many principles of architectural space, including the collapsing of foreground and background distinction, or of presence and absence, as in those paintings of Franz Kline in which we are not sure if the image is black on white or white on black. Cho’s pieces are, of course, in color, so the possibilities for this sort of gestalt-switching visual play are abundant. The pieces often use physics-simulation algorithms, and quite often the words can be twisted into total abstraction before snapping back into legibility.

The Flash version of the children’s abecedarian Bembo’s Zoo, produced by Roberto deVique de Cumpich, Mucca Design, and Federico Chieli, became something of a sensation about five years ago when it was released. The premise is simple — find an animal whose name begins with a letter of the alphabet (z for zebra, for example), animate those letters in intricate, kaleidoscopic patterns, and then have them miraculously snap into an image of that animal’s form — but somehow the transition from a choreography of letters into the fur and musculature of the familiar animal produces a pulse of delight which you yearn to revisit, as the animal almost immediately fades once you see it. Whether or not this is “poetry” of any nature seems irrelevant — in fact, this piece, like most in the “comedy of reduction,” have such little aspiration to “high art” and are so unpretentious that the question just seems moot. (Is Ian Hamilton Finlay’s “Le Circus” poster a poem?)

Another piece I would include in the comedy of reduction is The World’s Smallest Blog, which is a fully-functioning Flash blog measuring 18 x 18 pixels and which includes a photo gallery, video, a webcam, a game of Pong, and other blog-like amenities, as well as two pieces I’ve already linked to, Basho’s Frogger (whose entire text is the “frg / pnd / plp” of its high score board) and Pac-Mondrian (whose entire text is its name). And not to Twitter my own horn again, but my “Star Wars, one letter at a time” (along with its companion pieces relaying Ginsberg’s “Howl,” O’Hara’s “The Day Lady Died,” and Creeley’s “I Know a Man”) seems an obvious candidate for this category.

Jhave’s sequence “MUDs” involves the visceral interactions of a handful of words with computer-enhanced live-action video that are among the most effective and memorable of text/video works I’m aware of, given Jhave’s success in rendering his words physical — visceral, unclean, sometimes as if a writhing physical excretion — and the physical elements — feet, heads, hats, etc. — uncanny and machine-like, as if he were programming mannequins that had leaped right out of Freud (or Hans Bellmer). Nick Montfort’s new project, ppg256, is a sequence of 256-character, single-line Perl programs that, when run, generate poems for as long as the program is active, and thereby seem to have something to do with the comedy of reduction, but I want to reserve this project for a later “comedy,” that of (drum roll) recursion — you’ll hear about this shortly. 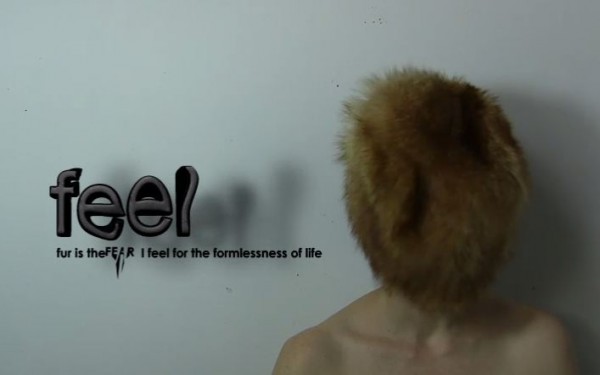